Our last two dives in the Islas Galápagos were here before we knew it.  Returning to diving company Scuba Iguana, we headed this time to Isla Seymour Punta and Isla Gordon, which I was extremely grateful for because it meant a dramatically shorter boat ride of about forty-five minutes.  However, this dive was not without reservations — It was more advanced, mainly Gordon which was known for extremely strong currents.  The divers in our group here had over fifty dives, others had surpassed 100, and still more had given up logging because they had been on so many that they had lost count.  At the time, Andy and I had a whopping record of six and seven.

Fear not! I told myself because the instructors (different from before) knew our level and said we would take it slow (probably afterhearing rumors of my life on the seas from the previous dive).  Our dive group too was fine with this — a woman from Texas, a man from Japan that had immigrated to Peru as a child, a man from Norway, and a woman from Australia that had immigrated to Virginia.  All of this made me happy but what made me more excited was the fact that I never chundered off the side of the boat so I actually made friends!  A sheer miracle!  Added bonuses: When we arrived to the site, both Andy and I were able to get into the water and — for the most part — go down without any problems.  Andy had been given a larger air tank too so that we could all stay under longer on, what would be, his and my deepest dive (nineteen meters/sixty-two feet). 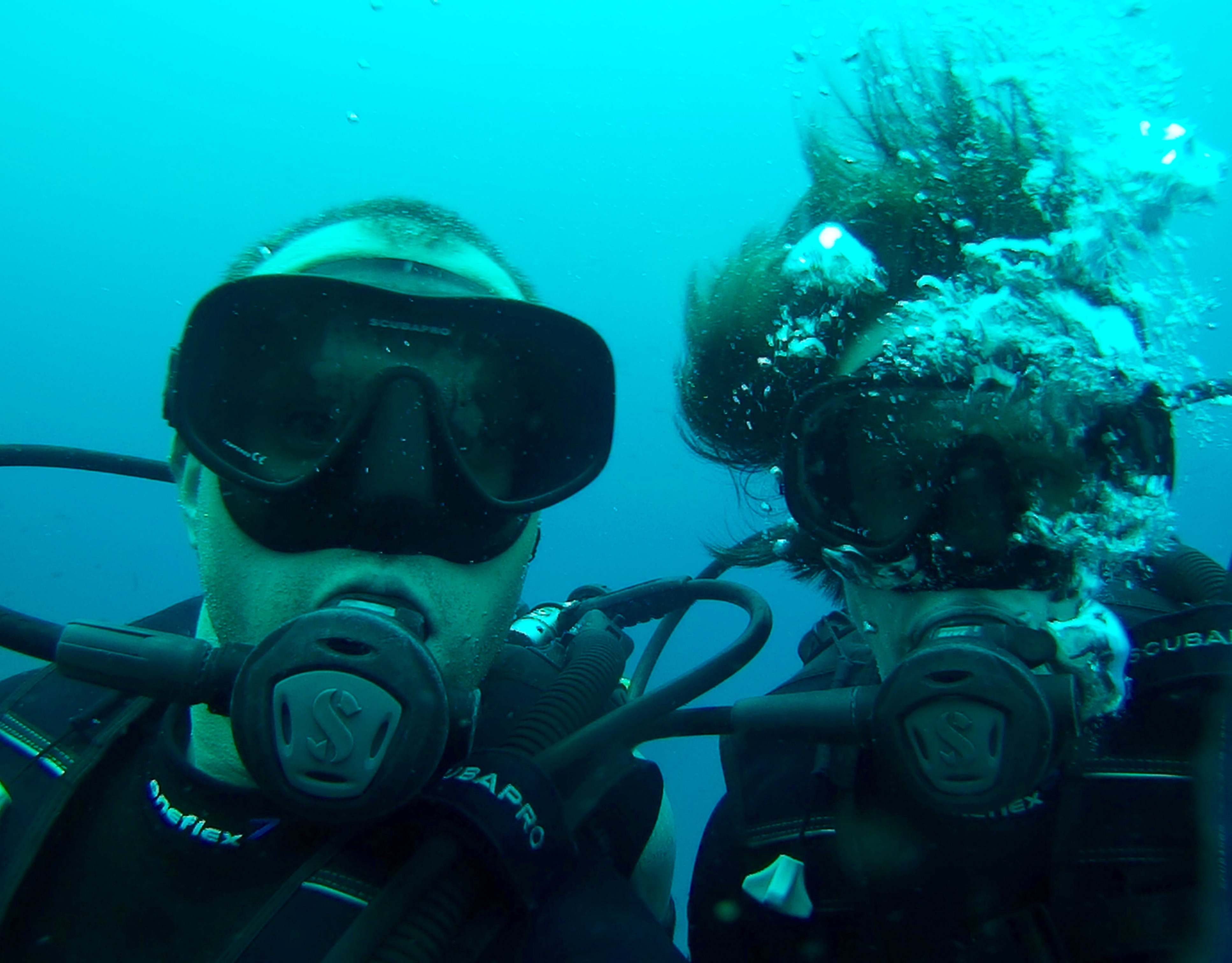 Down, down we went and I held Andy’s hand.  This isn’t an action we have to do out of necessity but instead one we chose to do so that it is easier and faster to point out animals to one another. 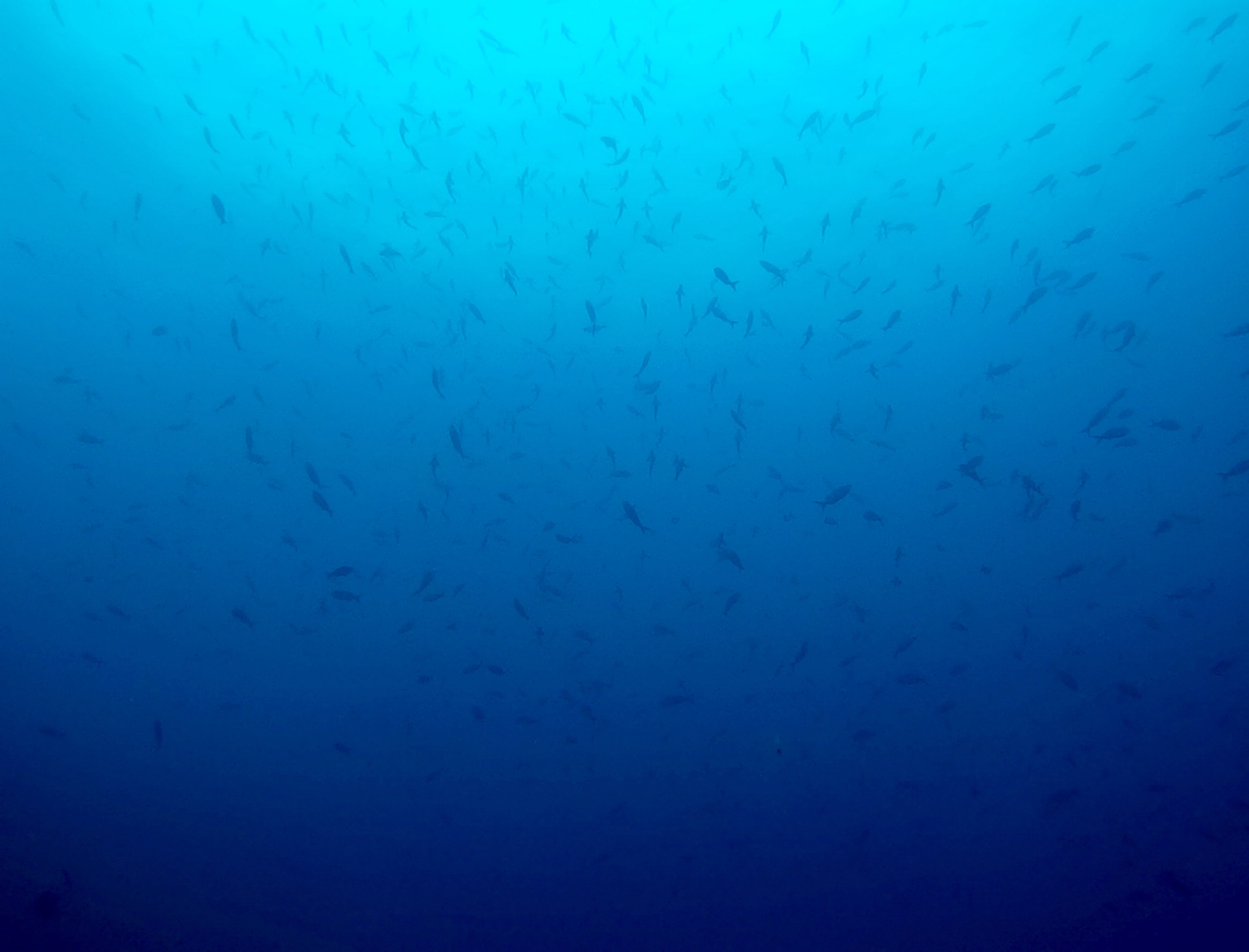 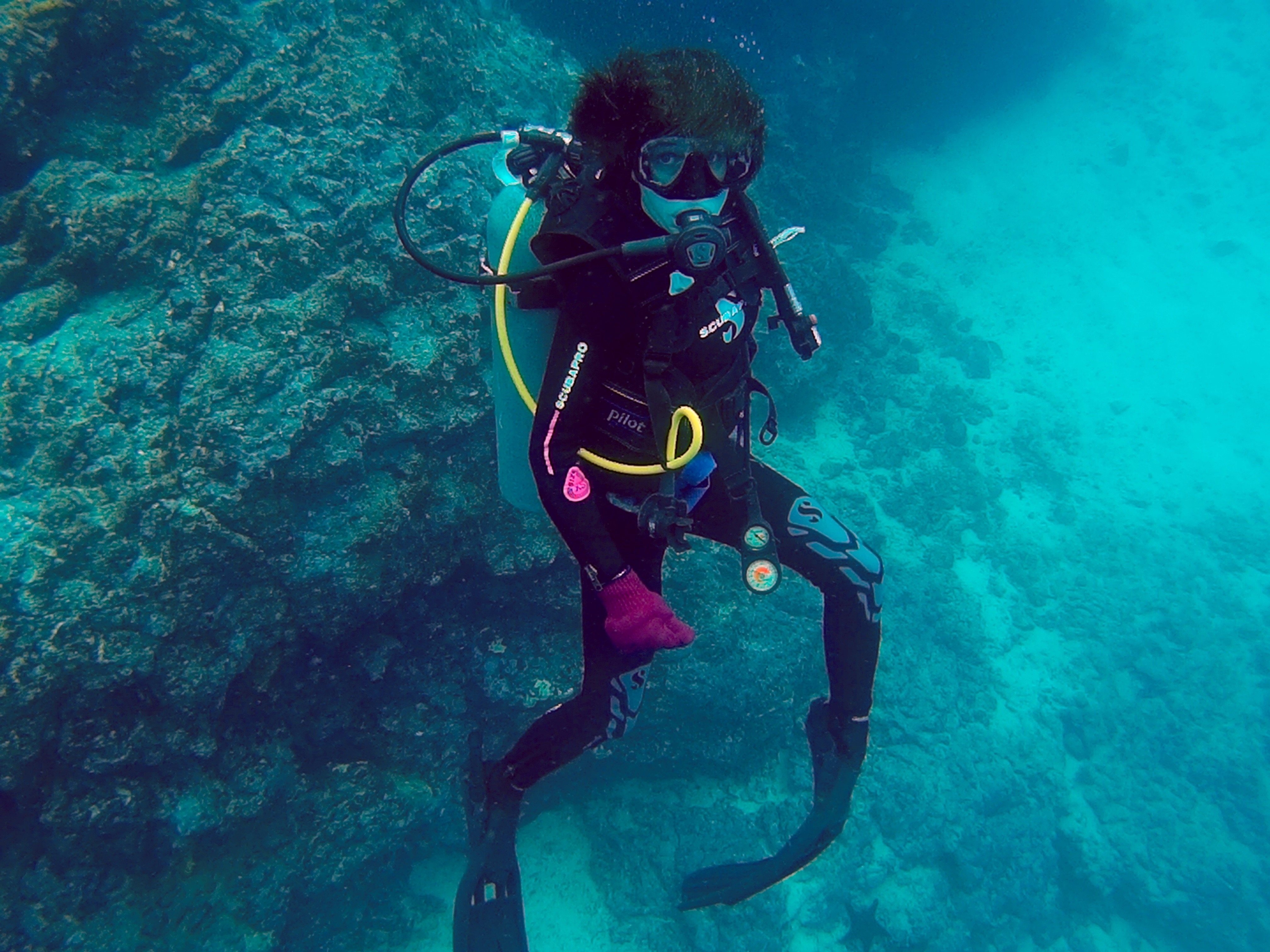 We are doing it! I thought.  We are diving!  We are divers! and right as I started to get confidence, feel comfortable — content — underwater, an instructor comes in front of us and directs us to let go of one another’s hands.  Confused, we did as directed but that didn’t seem to be enough.  Possibly he thought we were holding hands due to fear or lack of diving talent, so he promptly took my hand and motioned for the other instructor to take Andy’s because Andy was apparently guilty by association.

Confidence shattered, this is how the rest of our dive went.

I still don’t understand why I had to have my hand held — not that I’m complaining because, again, I got my own personal dive expert.  But we were doing well before — We were keeping up with our group, we were looking where directed, we were responding immediately to questions, we weren’t focusing much on photography — we looked and felt like actual divers.

Regardless, onward we roamed underwater — hand-in-hand with our instructors — and that’s when we find this extraordinary site: a school of five white-tipped sharks. 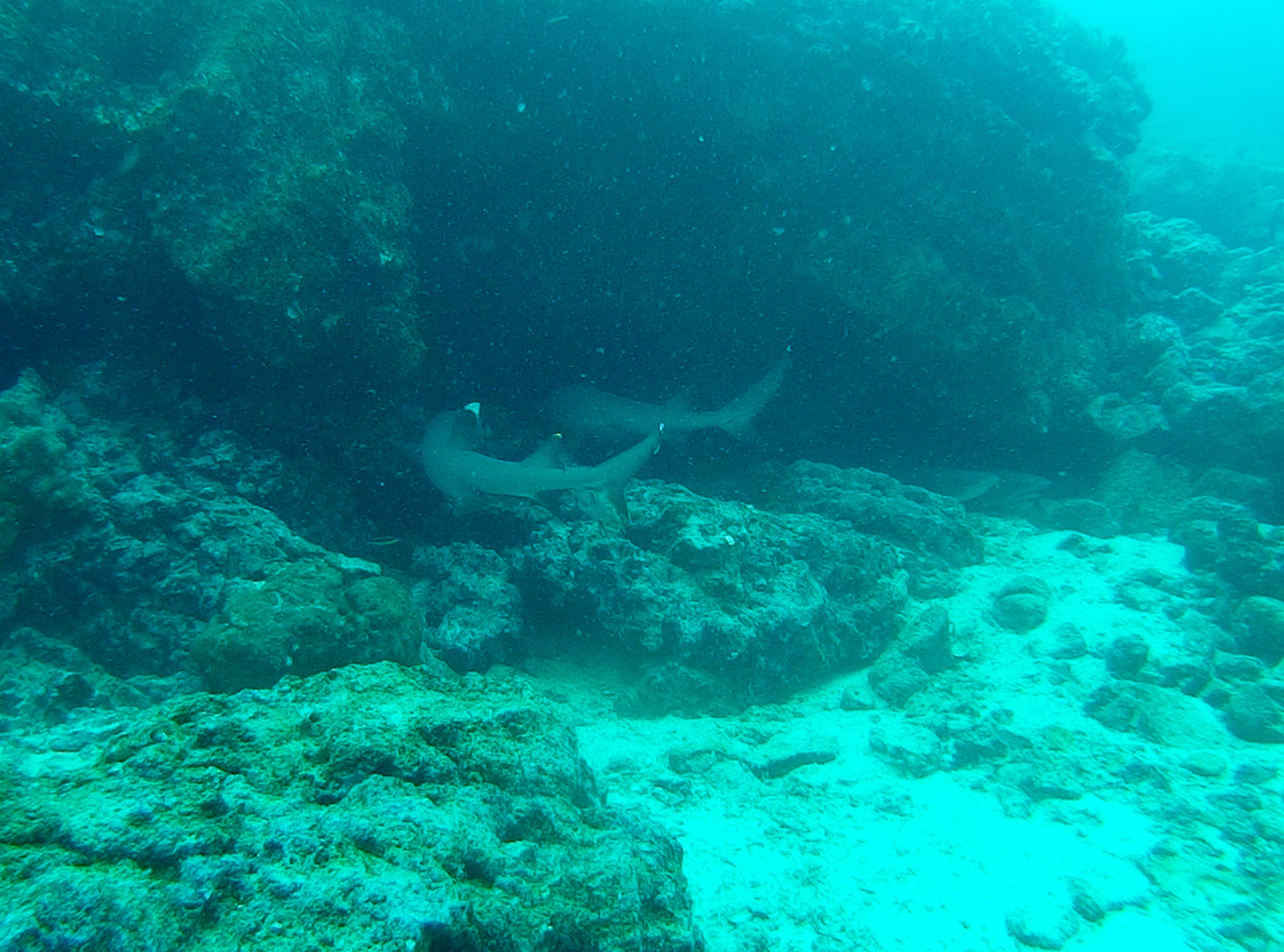 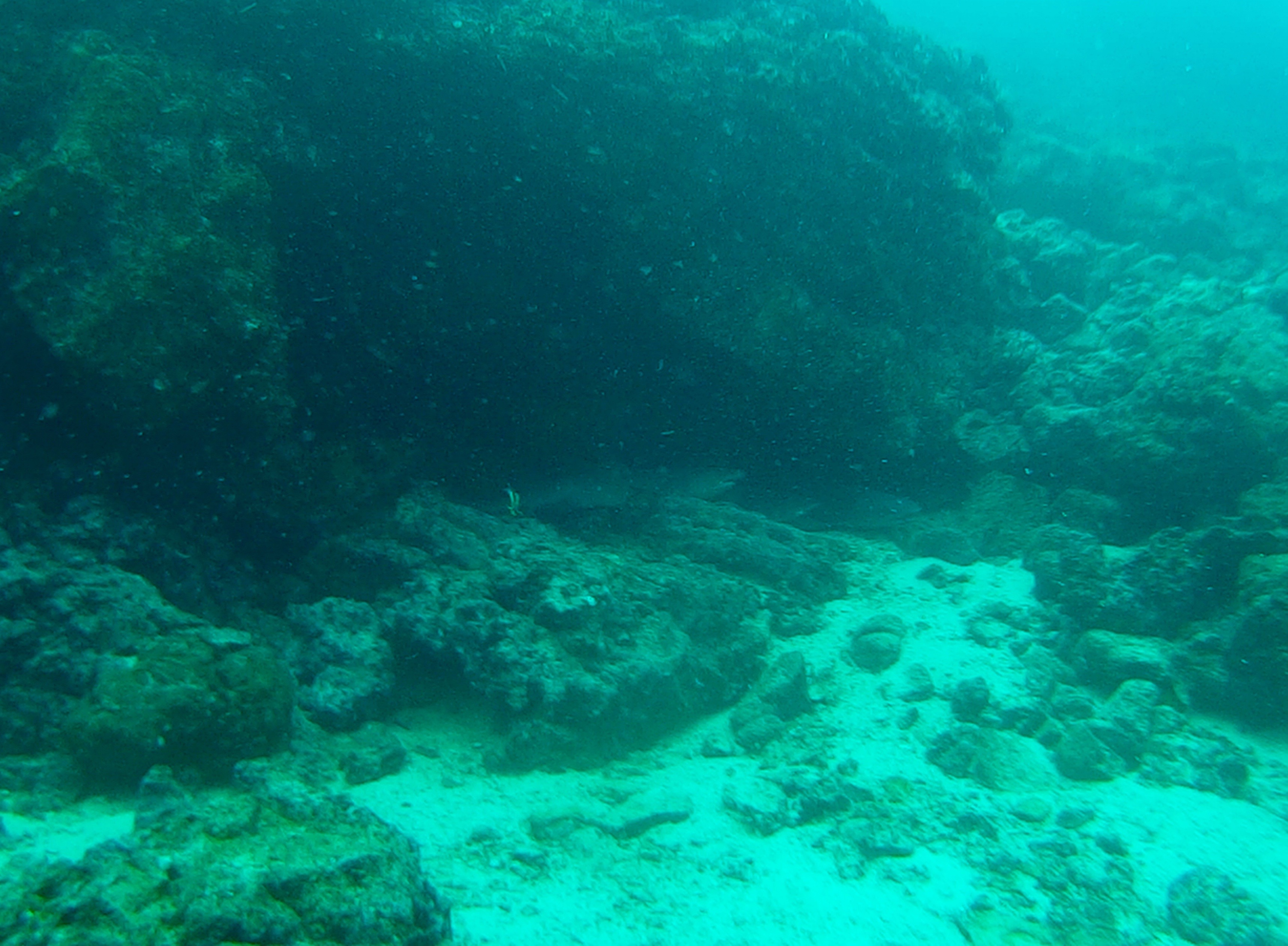 The sharks were about four feet long and were sleeping in a cave together, resting on top of one another.  When they saw us, they became nervous and scared, swimming in circles within the cave. 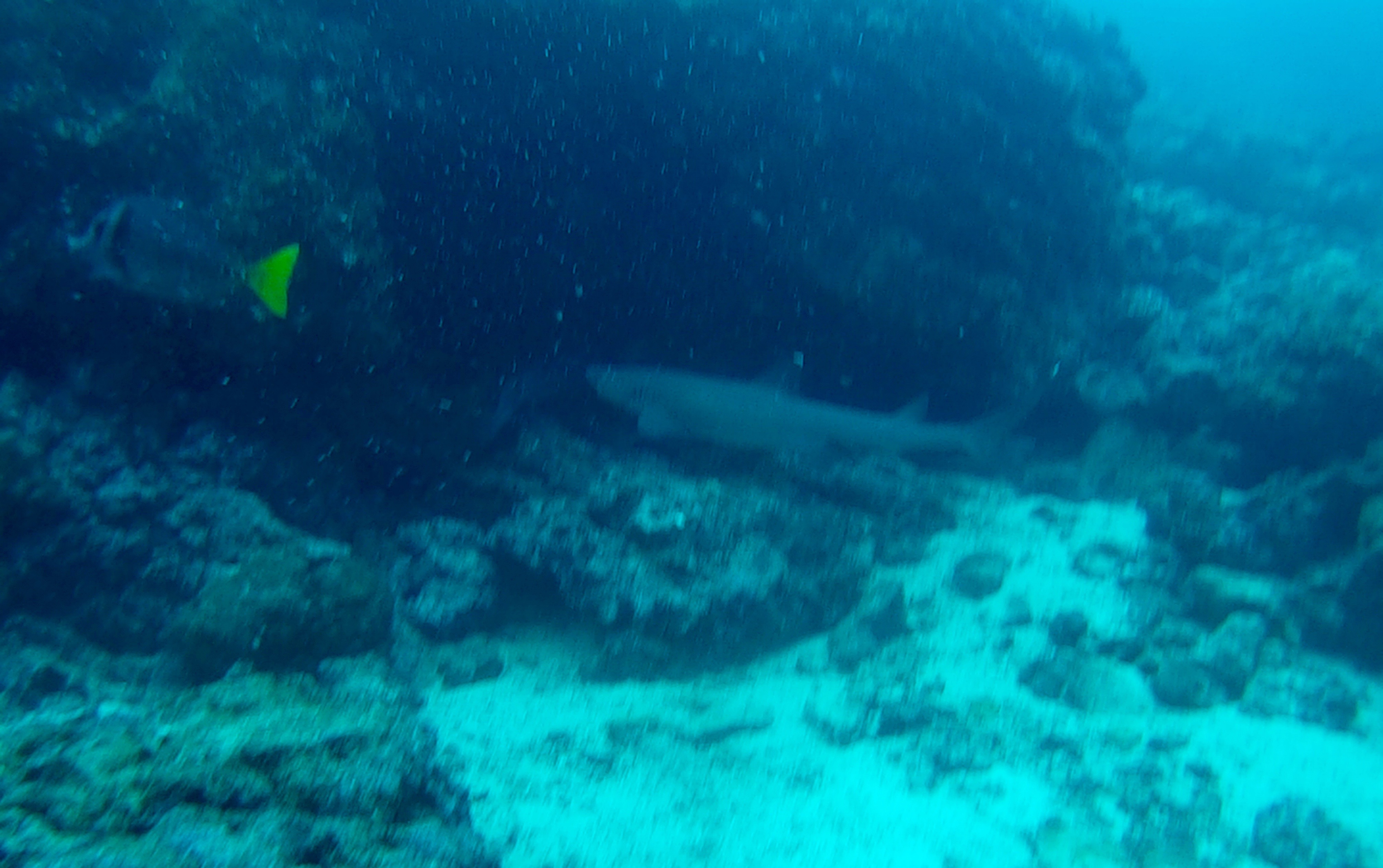 I’ll never be able to express the amount of absolute joy I felt looking at those sharks.  I got into diving to be able to see wonders like this, to be able to see sharks — calm, shy creatures and not the man-eating machines Hollywood has made them out to be.  And here they were, right before my eyes!

I could have stayed looking at the sharks until my air tank ran low but our instructors urged the group on and so we passed numerous large starfish and more schools of fish that were bright yellow and blue, others stripped like zebras . . . 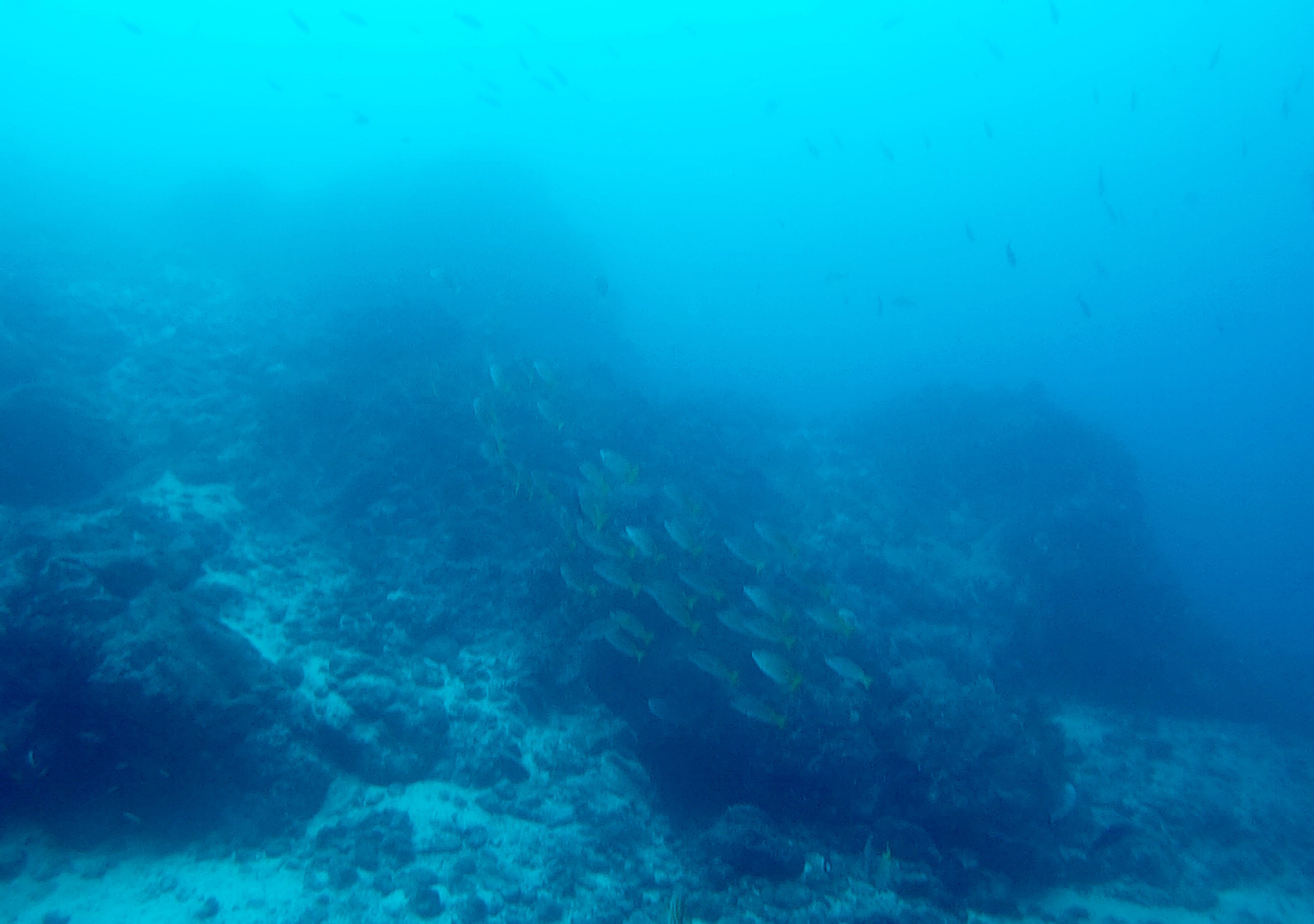 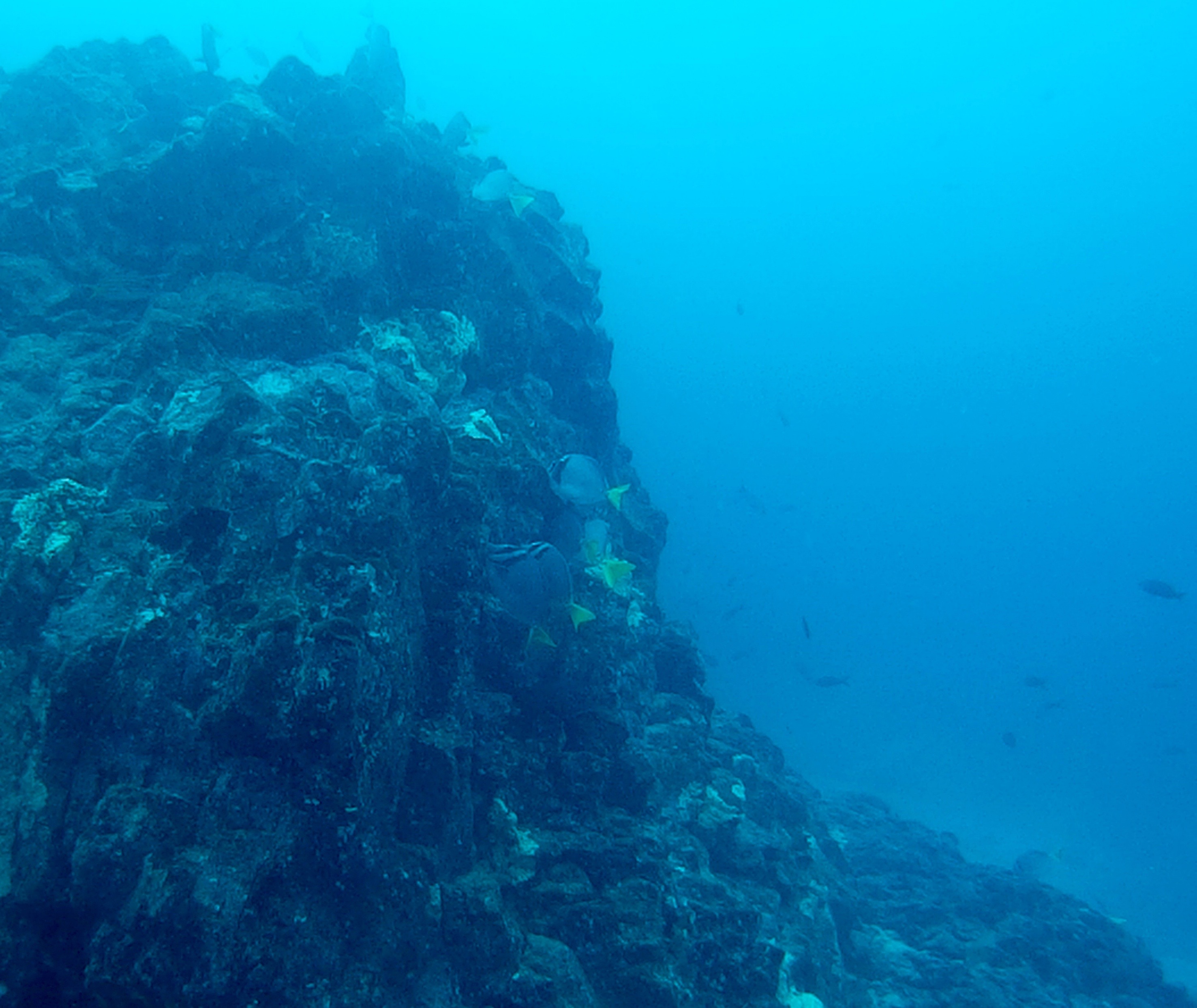 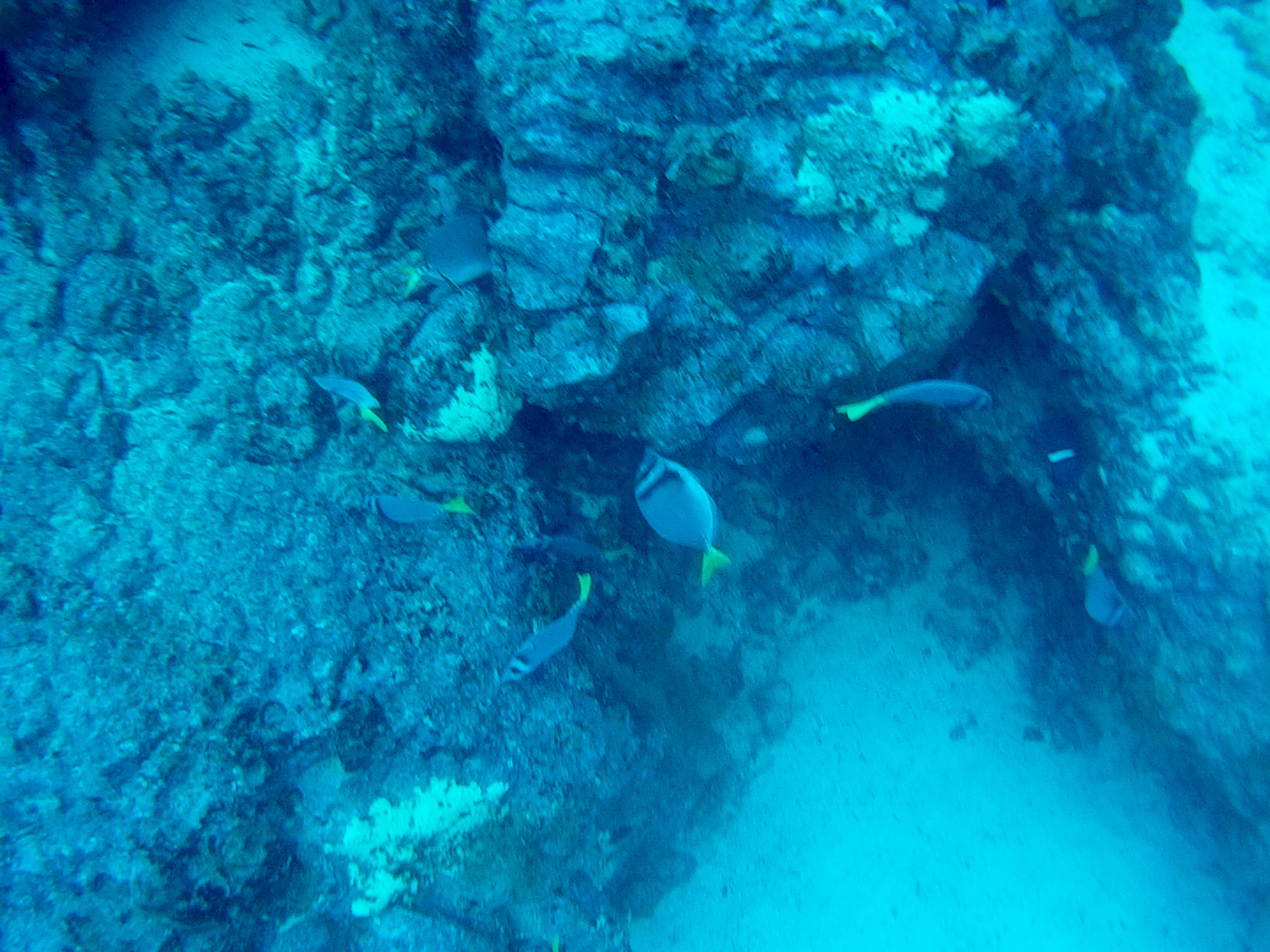 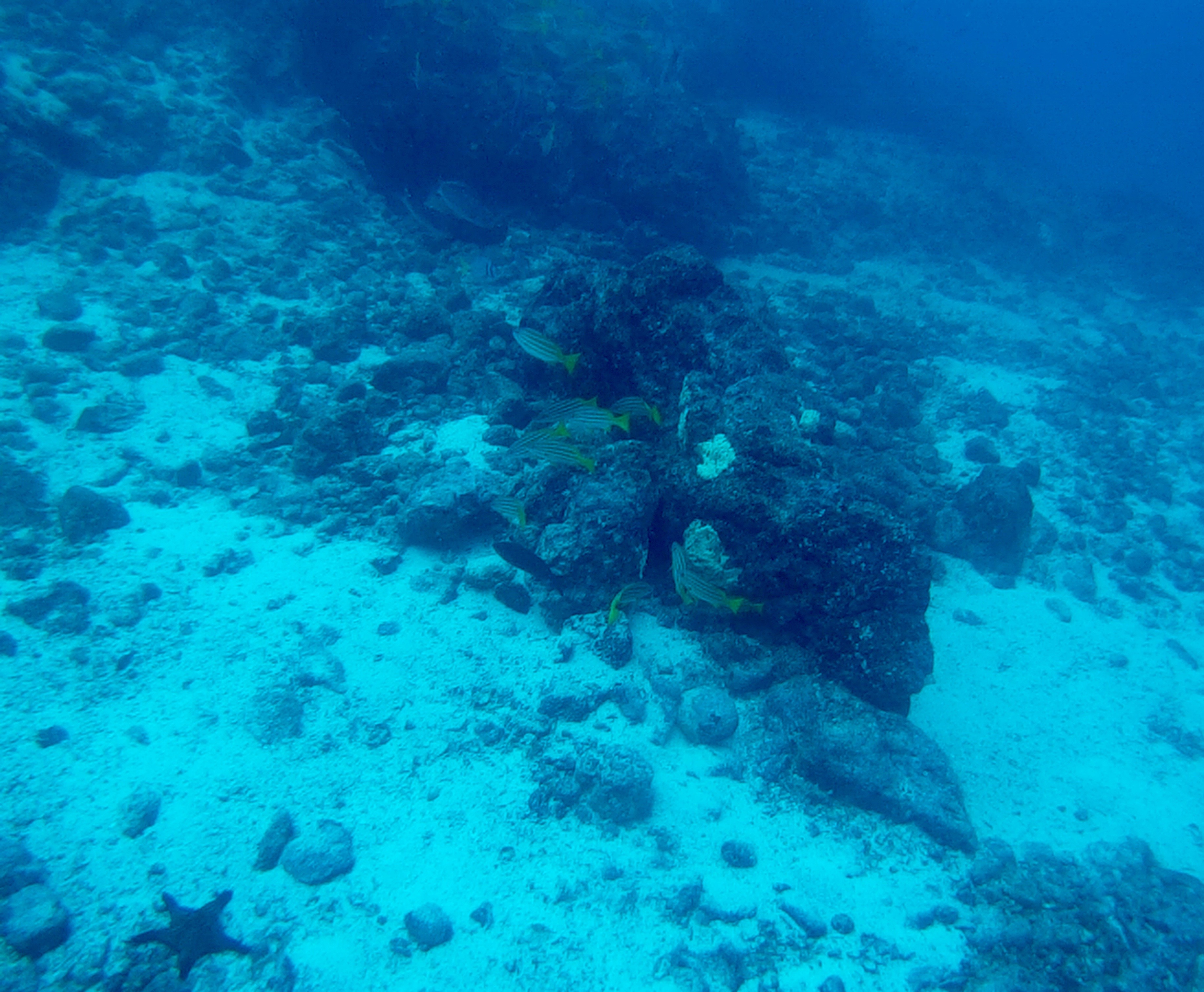 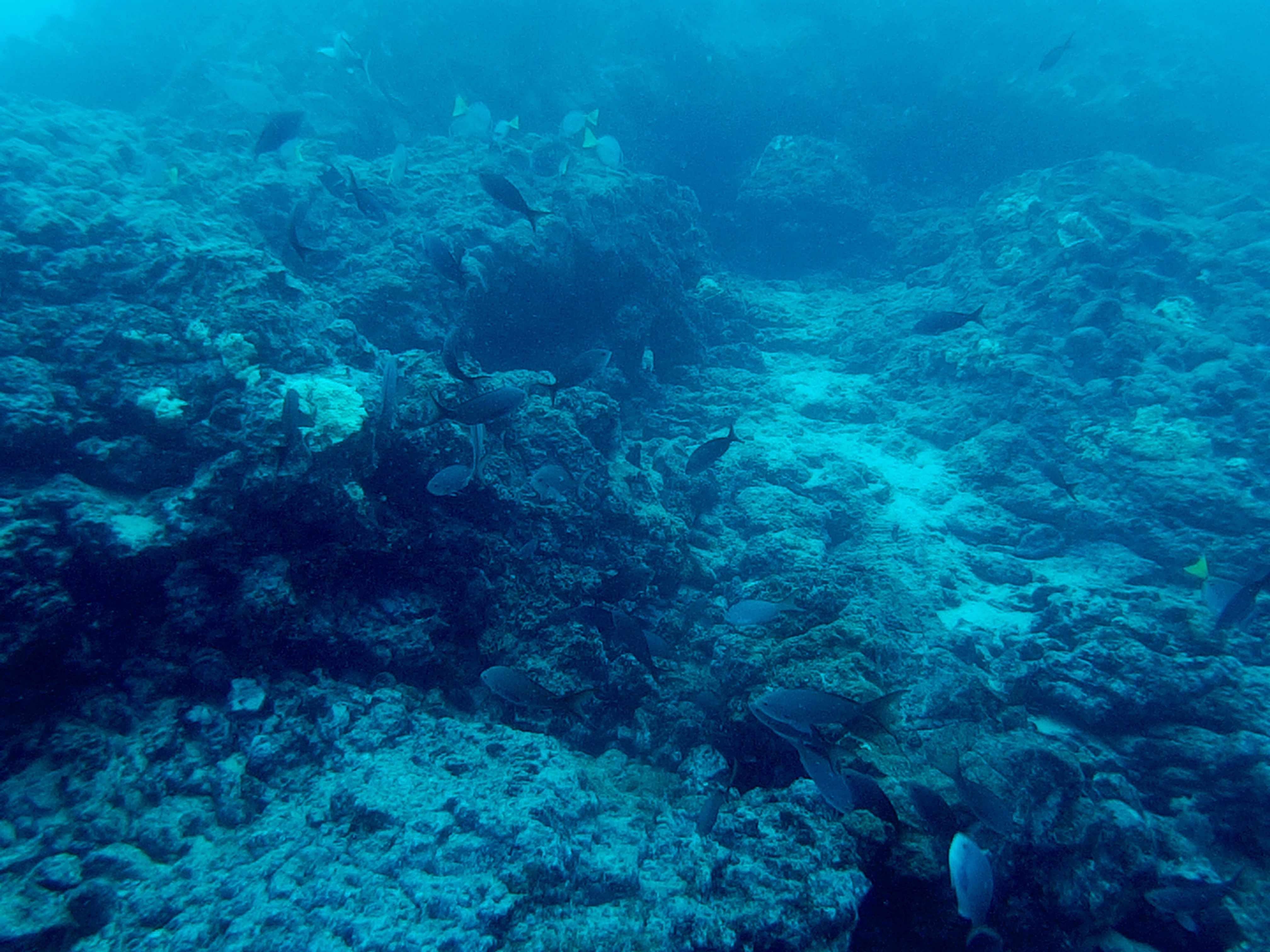 Deeper still we dove with the goal of seeing larger sharks.  It was around this time the instructor let go of my hand and went to point out some type of coral opening and closing on the rocks.  “Stay here,” he directed with his hands, “and do not move!” so I waited, patient, as he showed each diver the coral. 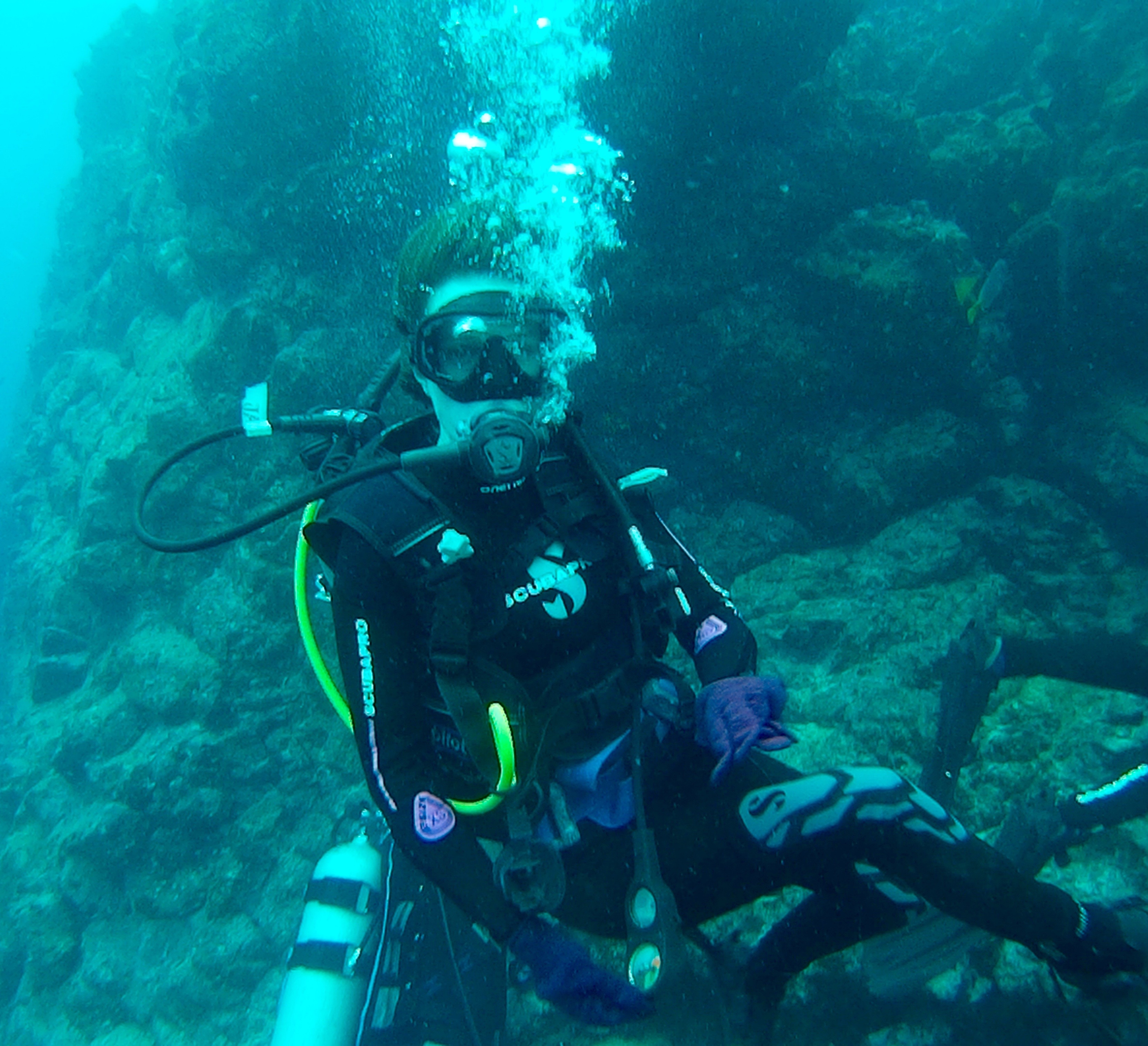 Soon the instructor returned, swimming back towards me and ready to take my hand.  That’s when I watched as his eyes suddenly went wide, as he pointed directly below me.  Nervous, I glanced down and found a large five-foot shark a few feet under my fins. 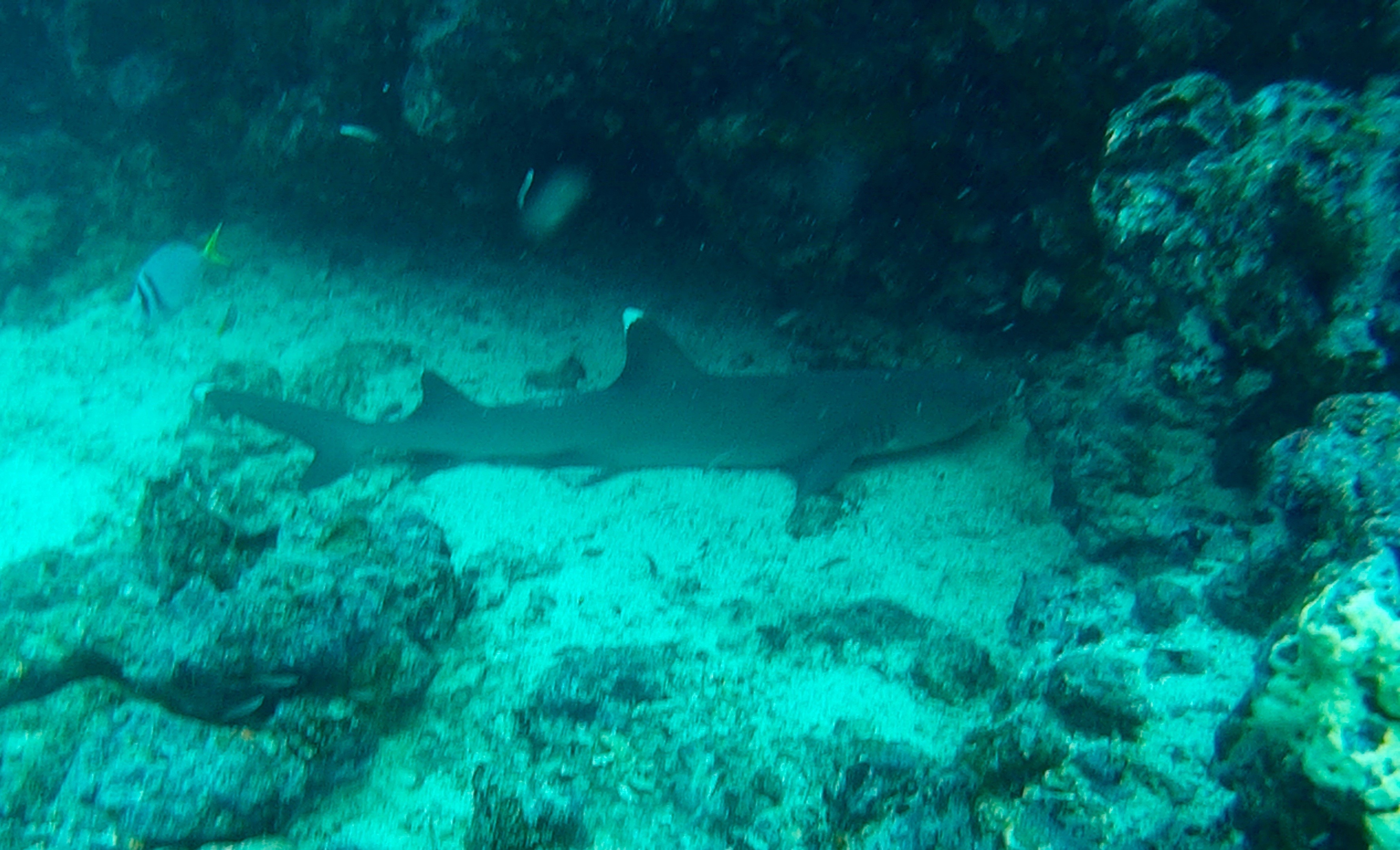 The white-tipped reef shark was easily as big as me and it immediately garnered attention from the other divers who wanted a look, such as this idiot who ignored the two meter rule and continued to get a closer shot with a GoPro. 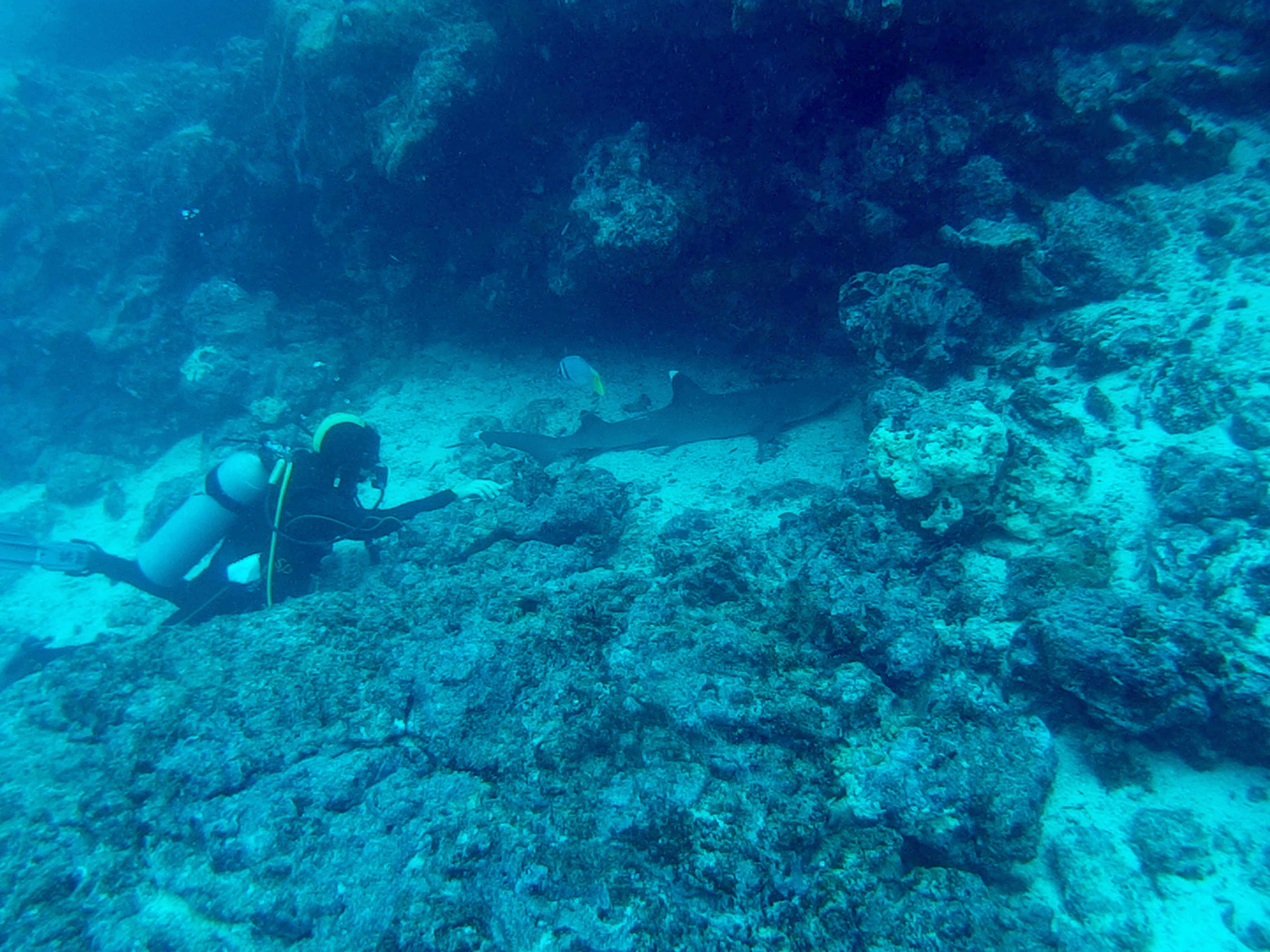 The instructor began to rapidly tap his tank with a piece of metal in his hand.  “Click!  Click!  Click!” the sound echoed, loud, through the ocean until the diver realized the warning to swim away.  Eager to move on and leave the shark alone, we continued to what is called the “Cleaning Station” where the fish cleanse each other by eating parasites off each other’s scales. 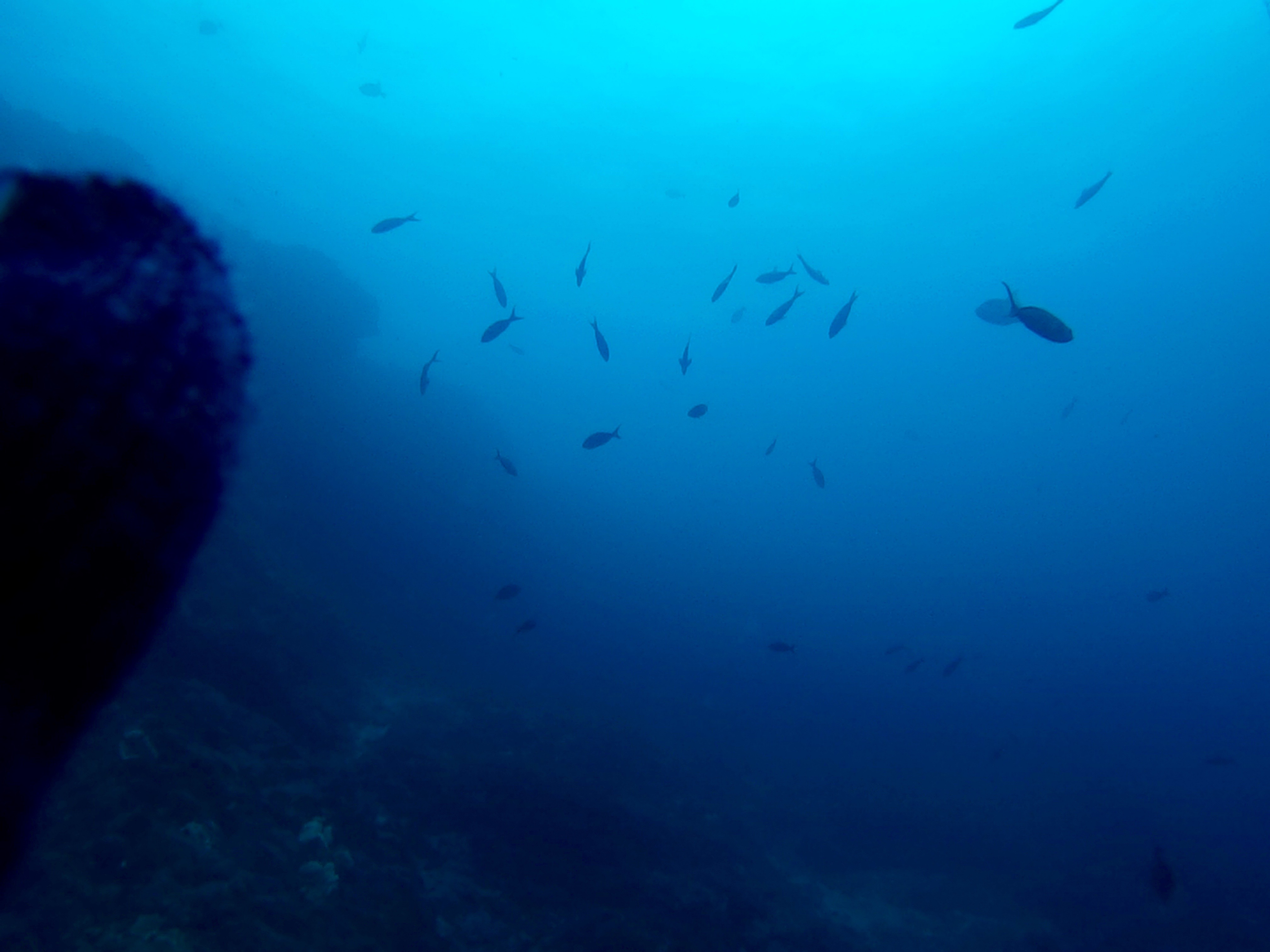 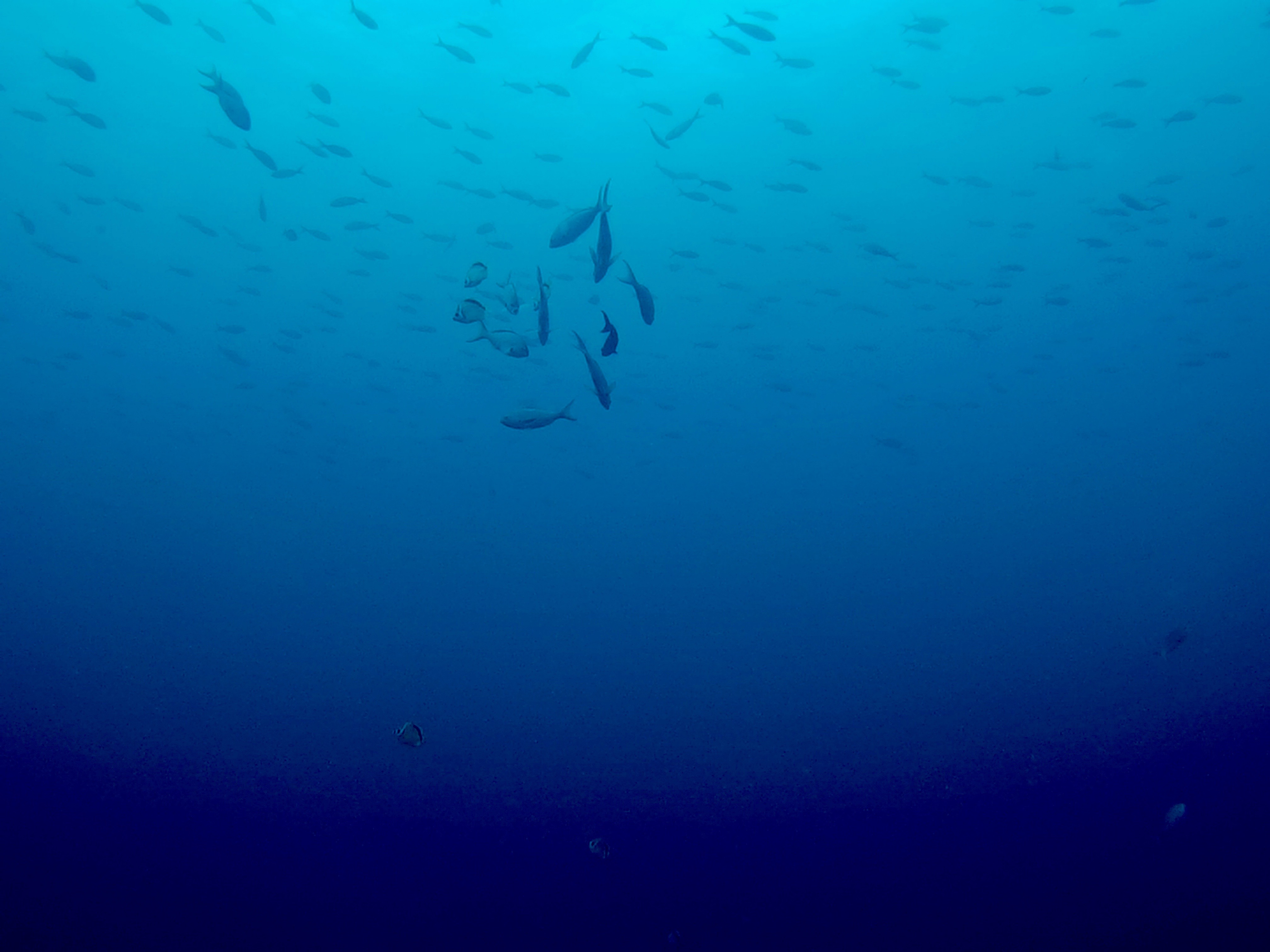 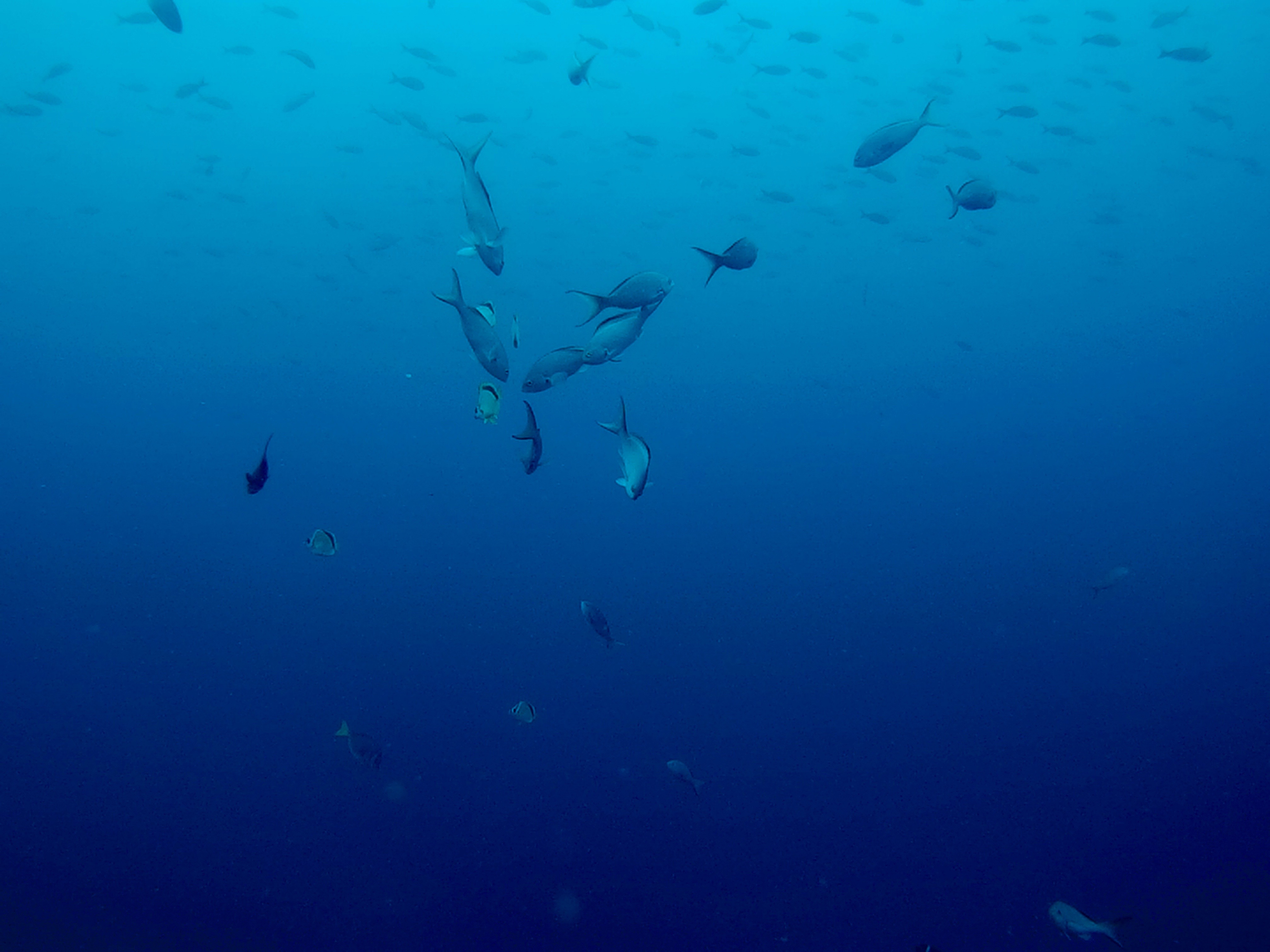 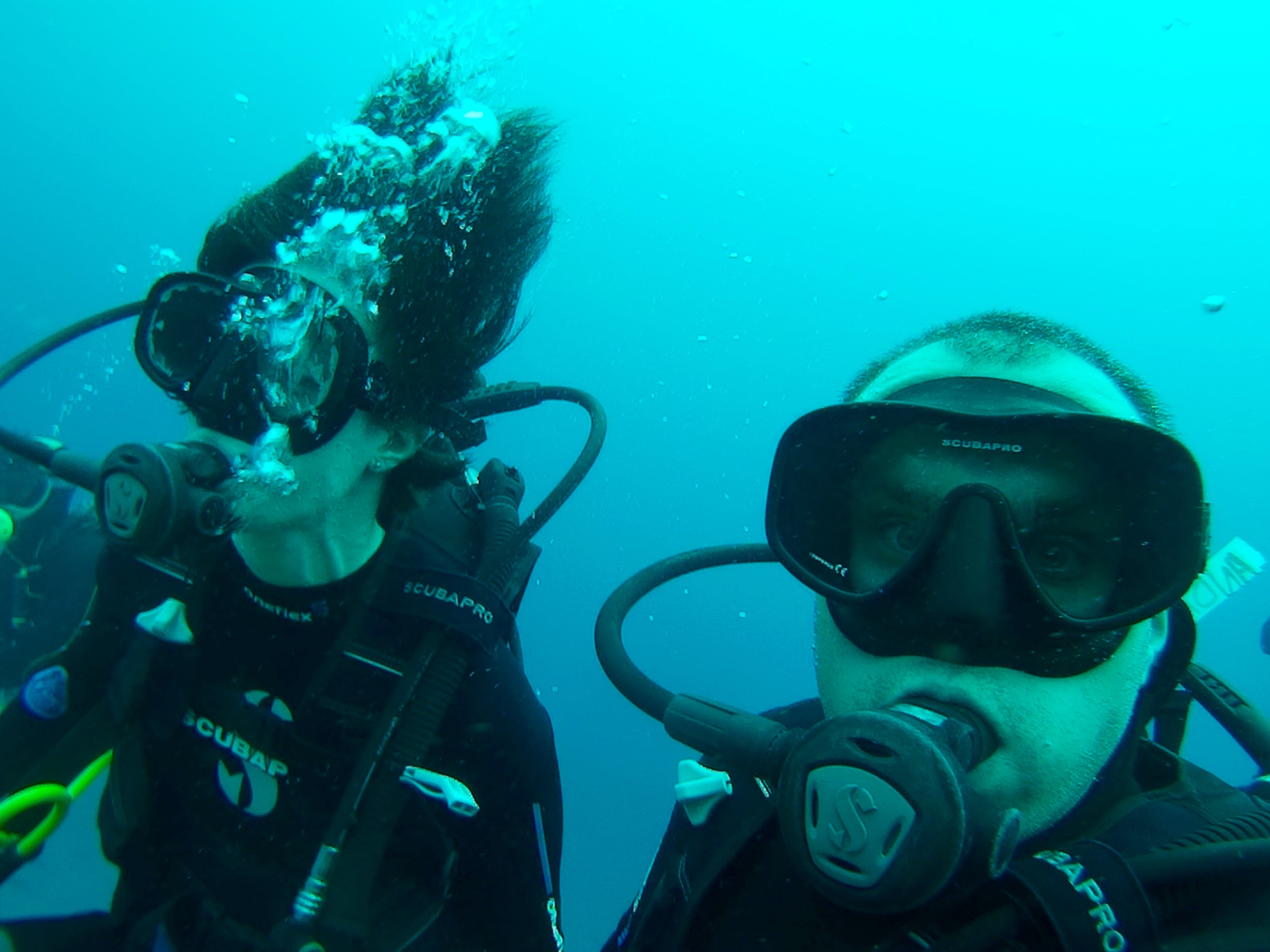 With the dive nearing an end, we swam a bit more, seeing schools of cornetfish, parrot fish, trigger fish, and more. 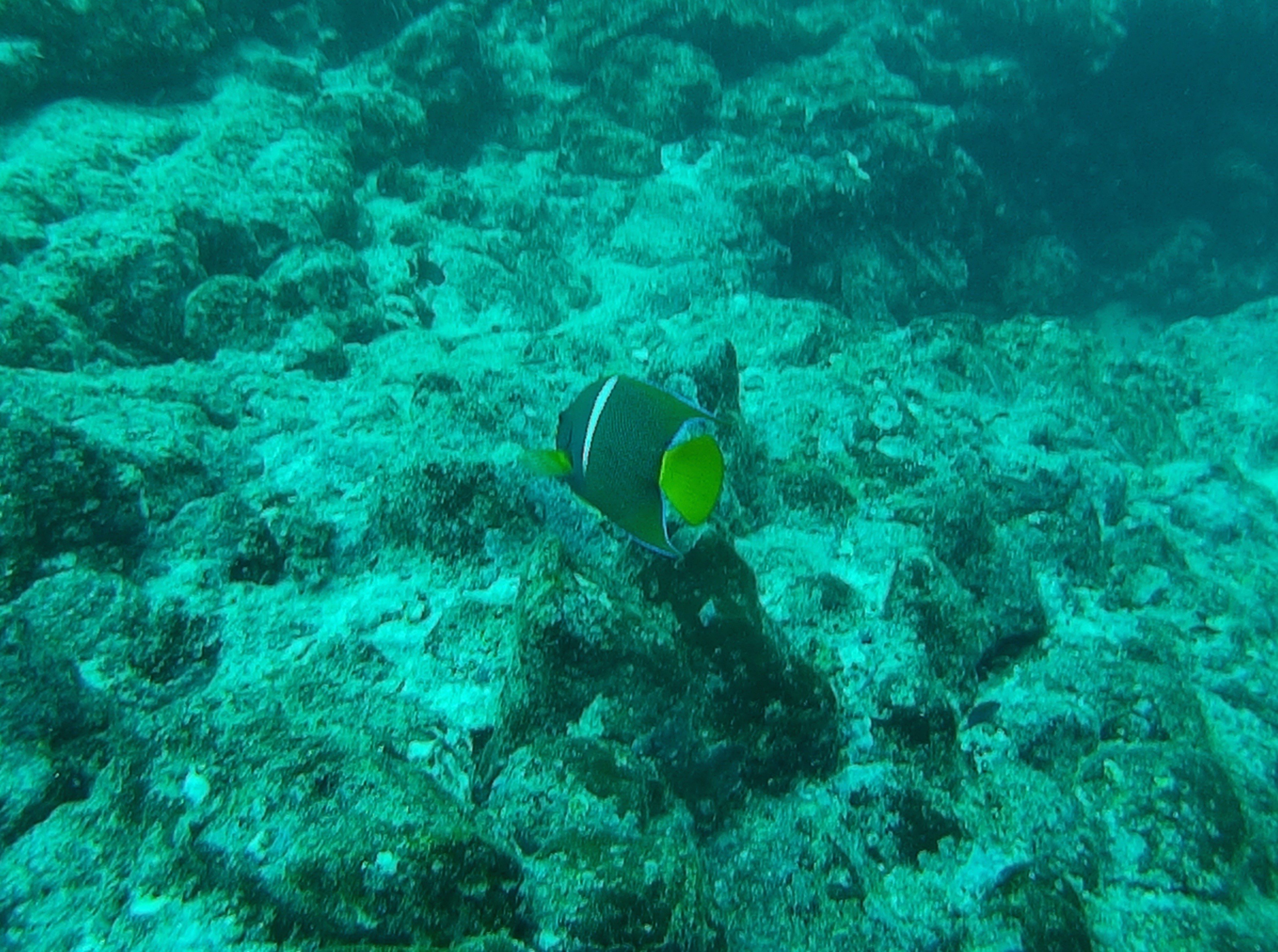 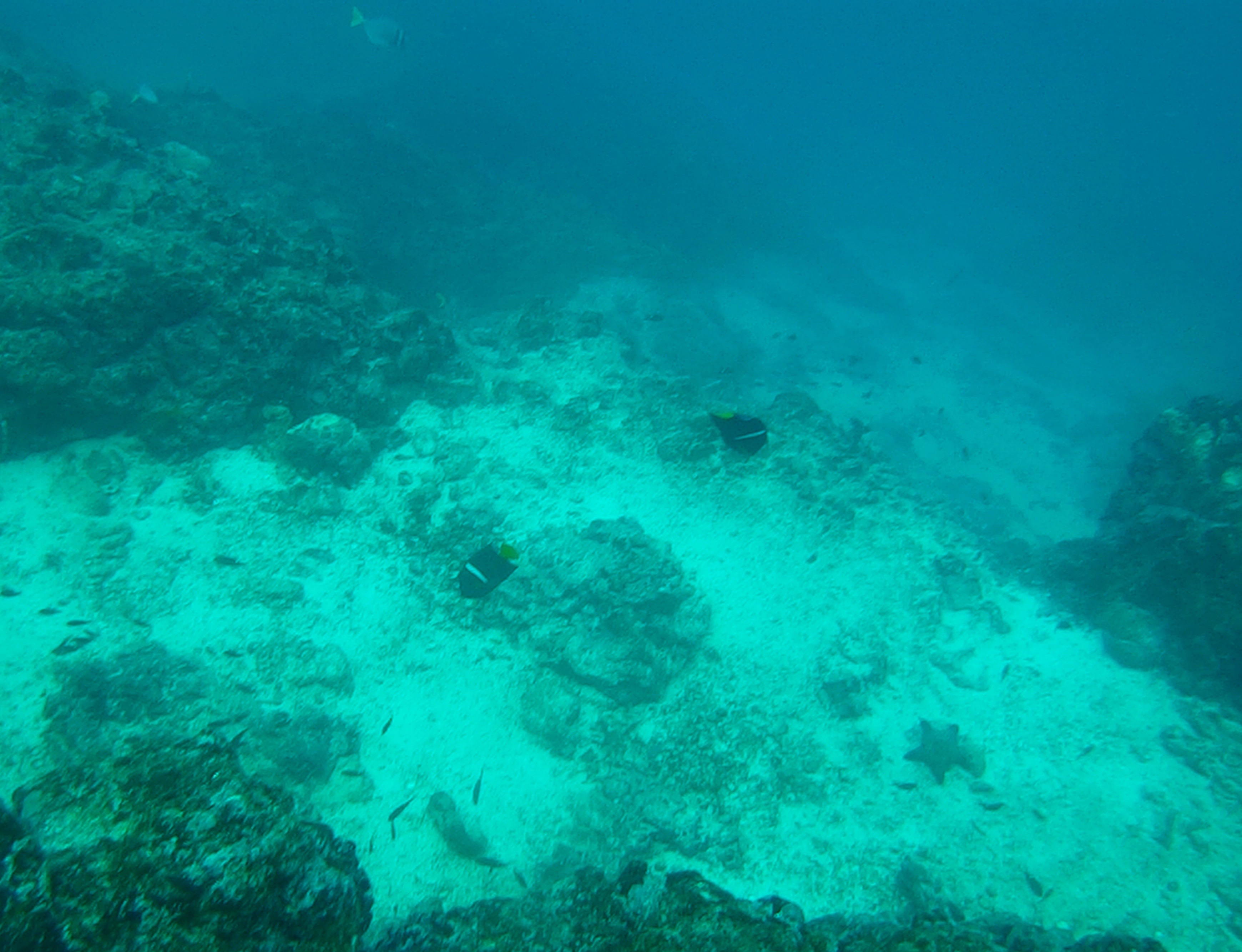 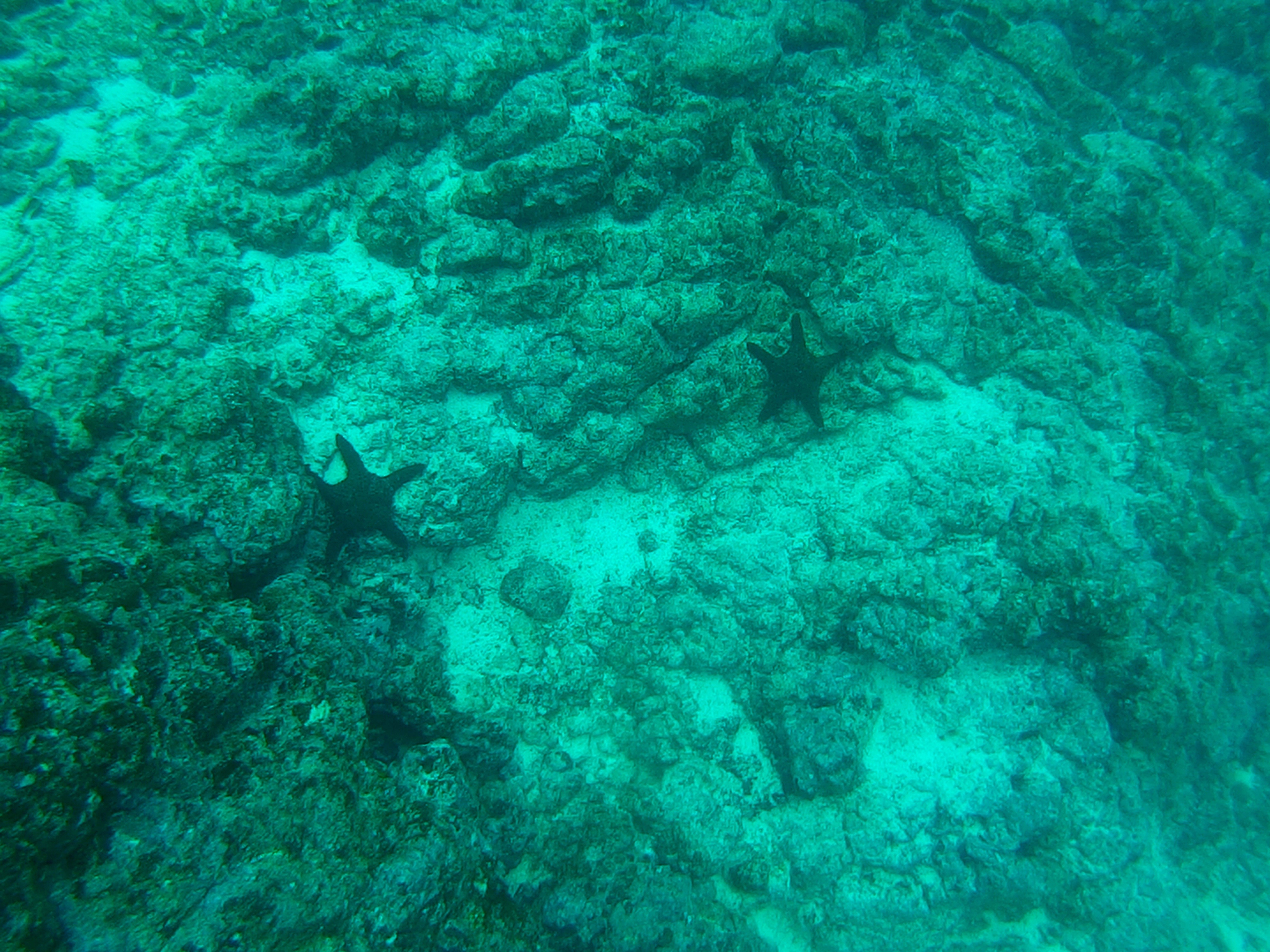 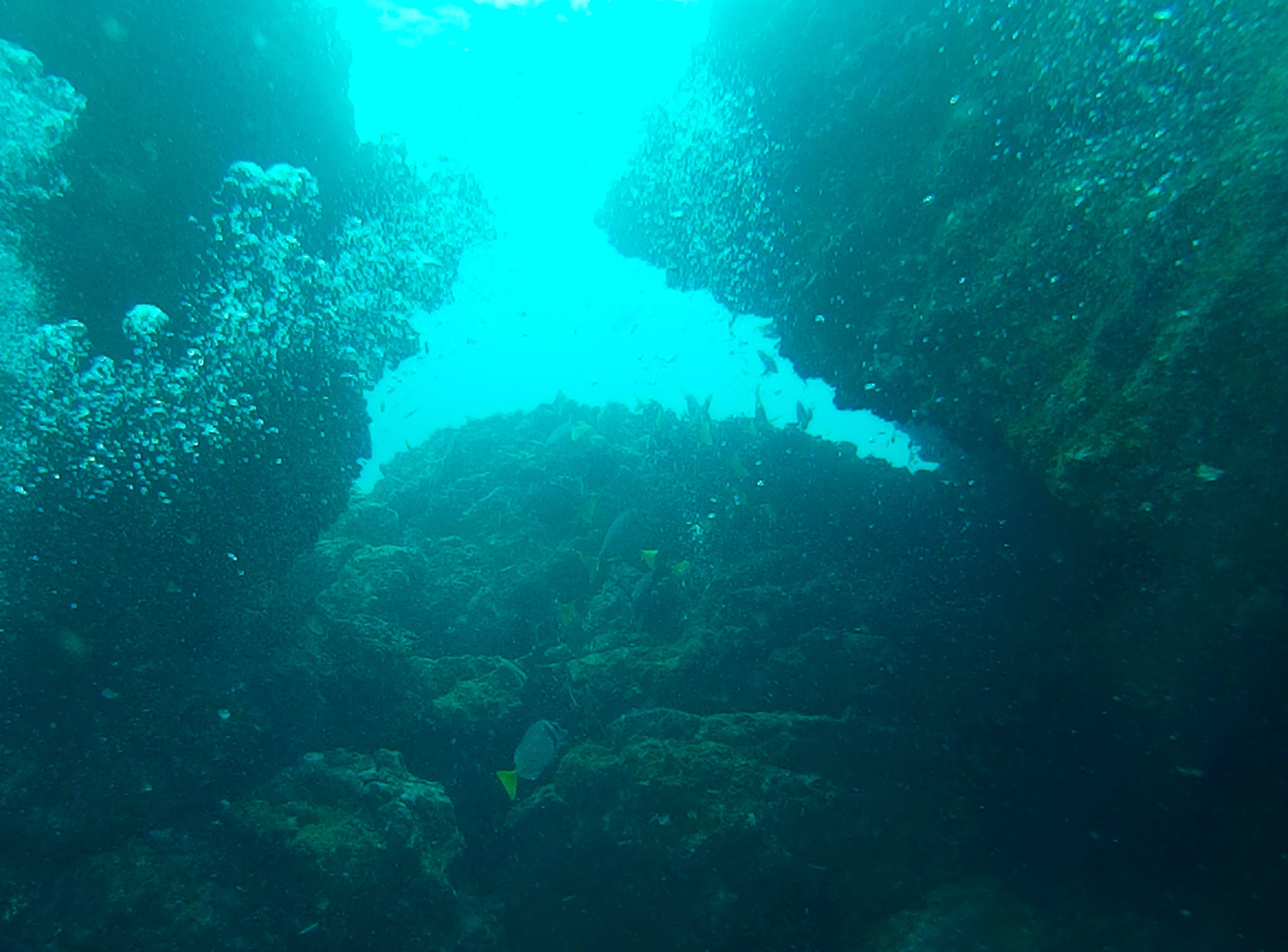 Before we realized it, it was time to go to the top so Andy and I made our way to the top with an instructor.  We had run out of air before the others so at the surface we waited . . . and waited . . . and waited for the boat, which was not in sight.  Our instructor continued to whistle and whistle again, loud and shrill, to get the captain’s attention but still no sign of the boat as we floated, bobbing in the water.  I’ll say here, I’m not scared of the ocean or animals inside . . . until if I am bobbing at the surface of water.  The image of Jaws — the first movie cover — with the massive great white racing straight up under an unsuspecting swimming woman appears in my head each time.  Truth be told that movie cover alone terrified me so much that I could never watch the movie or even look at the movie cover a second time.  So here, at the surface of the water like that swimming woman, I began to panic.  Inside my head I knew there were no great whites in the Galápagos.  Inside my head I knew I had just witnessed sharks, calm and far from aggressive, but still I was overcome with dread and fear.  I heard our instructor whistle again and again, and I thought This is how it feels to be lost at sea — the fear, the worry, the — and finally our boat was in sight!

Quickly climbing aboard, we waited while the other divers surfaced and got inside.

In the end, we did not go on the second dive this day.  I regret not going on this one too, but at the time I wanted to end diving on a high note: I hadn’t been sick, I hadn’t dry heaved, I had actually enjoyed myself.  I didn’t want to risk it.  Not only that, but the last dive was advanced so much so the instructors earlier informed us that we may not qualify for it due to lack of experience.  True, they said they did feel confident we could go but Andy and I agreed it was for the best to end ahead.  So at our instructor’s suggestion, the captain dropped us off at a dock where we got a taxi back.

“To the Red Mangrove,” we told a man herding taxi driver.  He pointed to a taxi and we got inside.

“Mangle rojo?” Our taxi driver had rolled down his window and was questioning other drivers, a look of confusion on his face.  Mangle rojo – What is that? I asked myself. Okay, ‘rojo’ means ‘red’ so what’s ‘mangle’? I silently worked to figure out the Spanish.  Mangle. Mangle.  Mangrove!  That’s when it dawned on me our driver was trying to confirm where we were headed. “Mangle rojo?” he asked again but no one looked at him.

“Mangle rojo?!” he shouted until someone turned and confirmed.

“Si, mangle rojo” I heard a voice echo my thoughts and off we zoomed from the sea.

That was my one shot at speaking Spanish — at not only understanding but communicating in regular conversation — and that shot slipped from my grasp, opportunity missed.

When we returned to the dive shop later that day to log our dive, we learned the one we did not go on was the most incredible of all — Hammerheads, a school of about fifteen adult hammerheads, swam above and below our dive group.  Hammerheads — the ones I had traveled all this way to see — now gone.  While I know it was for the best, damn do I regret missing that dive the most . . .