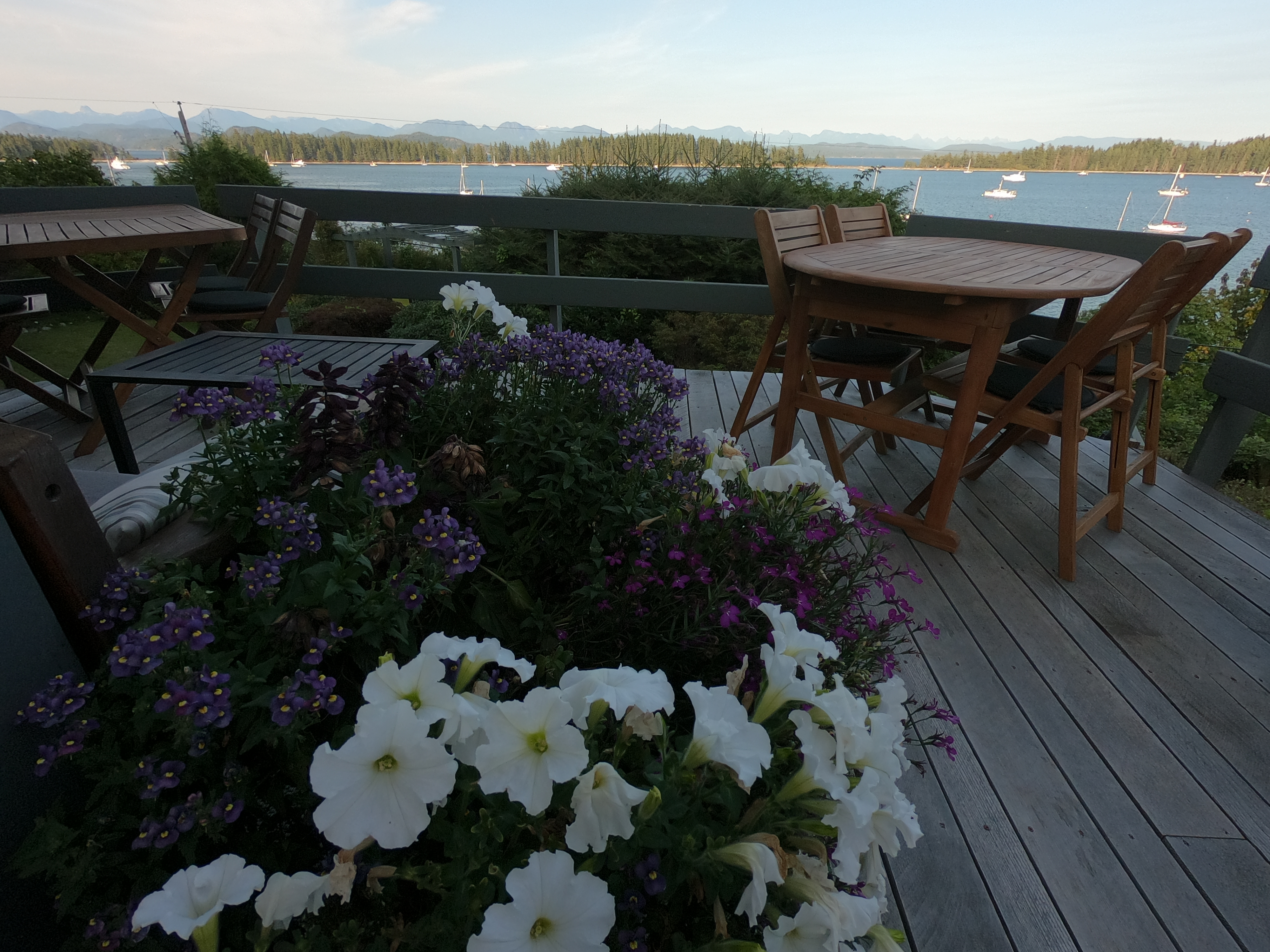 The vehicle’s engine hummed as we waited to drive onto the ferry to leave Telegraph Cove for Quadra Island — Both this cove and island were where we began our Canadian adventure and now where we were set to end it. The ferry line was long and the day, warm which only meant it was a perfect time for ice cream.

While our kayak guide Mike sat at attention at the wheel, Andy and I leapt from the vehicle, sprinting after our other guide Estelle who lead the way down the pier to my black cherry and coconut ice cream.

By the time we got back (with ice cream for Mike), the ferry line was set to move forward and so we did — away from where our trip started, away from our dream weeklong adventure.

Moments earlier, we said goodbye to the rest of our kayak group as the eight remarkable people were dropped off at their destinations before their journeys home. For the past week, the twelve of us had sea kayaked with whales by day and wild camped in remote island rainforests by night — every meal, every sunset, every moment spent together so that we had built a strong attachment to and a relationship with each person in our group.  And this also meant leaving them was extremely hard.

My ice cream dripped past the cone and slid down my wrist, allowing me — for a few licks at a time — to focus on my melting dessert and not on the different places we were from — Connecticut, Oregon, Arizona, different parts of Canada — The miles seemed too vast to meet again.

Isn’t it odd how strangers can come into your lives and shape you so dramatically but — in another moment — your lives will be separated again?

And so it was true for our last goodbyes to Mike and Estelle as they pulled up outside of British Columbia’s Harbour House — the bed and breakfast where Andy and I would spent our last Canadian night before heading home.  I admit — tears slid down my cheeks as we waved then watched Mike and Estelle drive away.  Until they, too, were gone.

The feeling of being tucked away in your own secret haven for days that stretched in the most happy, serene, and hopeful way — It is one I am struggling to describe.  Then the feeling of having your love beside you — standing hand-in-hand, breath held, and knowing one single step further would propel both back into society, back in the world — Backward.  That quick adjustment, that impossible time to cope — that, too, is one I am struggling to describe.

But we had to — I suppose, you always have to, and so we took that one step forward.  Then another.  And another.  And soon, we were at the wooden door.

“Welcome,” the softest spoken woman said with the warmest and most genuine smile as she gestured in a breezy way for Andy and I to take off our shoes before we entered her home.  Her name was Susan, and I could not think of a better person to greet us after our secluded wilderness adventure.

Entering her house felt as if we had stepped into a protected shelter, and I breathed a sigh of relief as she glided across her floor and spoke slowly of our room, her house, the back porch, breakfasts, and more.

Entire walls were lined with glass windows, and outside white sailboats hovered in place over the blue of the ocean so that this, too, felt like tranquility but somehow in a completely different way.

“Please make yourself at home,” Susan said in an airy way that made me lean in towards her.  I had the feeling wanting to her to stay near me and so I asked about the history of her home and her past.

I learned Susan had spent her past thirty-five years on Quadra Island, with twenty-nine of those years in this house.  Having an avid interest in architecture, she designed the house herself then raised her children — two daughters and three sons — here.  Her house has been featured in a number of places, such as England’s National Geographic Magazine in an article called “100 Quiet Places to Book.”  Once her children moved out, she told us she wanted to open her home up to guests to enjoy, and the way she told this last part made me feel as if I had a special invitation to stay.

But Susan did not want to intrude on our time and so she finished with a motion to where the towels were and a recommendation of restaurants for dinner and a chat over a breakfast time and food.  “There is another couple — they are not here right now — but they are staying below on the main floor.  They do not have access to the entire house so you have the house all to yourself.  I only ask that you please lock up at night.”  Then, before we knew it, the door had closed and Susan disappeared.

“We’re here,” I whispered to Andy.

Turns out, we sat in the most comfortable silence at Susan’s kitchen table, watching the leaves rustle in the breeze and the sailboats ever-so-slightly rock side to side.

“Know what I want more than anything?” one of us said.

“A shower,” we both answered and so as Andrew had his first shower in a week, I went onto Susan’s wrap-around porch and took pictures of her stunning view.

Then I watched as a deer below nibbled on the neighbor’s flowers, and I listened as the birds chirped in song.  This is how beauty looks and how beauty sounds.

Andrew had re-emerged, clean and a new man, and so I went into the bathroom to take the best shower I have had in my entire life.

Before, we had grand visions of exploring Quadra Island, of renting bicycles, of seeing and tasting our way through this tiny portion of Canada . . . but we were also drained mentally and physically so we settled on dinner, which meant a walk to a nearby restaurant that sat against the shore.

As we arrived, the sun was setting so we spreading our legs before us and sat on the dock enjoying the fact that we had nowhere to be.

After dinner we stumbled back to the inn, utterly exhausted and anticipating the best sleep on an actual mattress . . .

The following morning, we woke early to be greeted by Susan and a delicious fresh breakfast before our early afternoon flights back home . . .

Thanking Susan for the wonderful breakfast, for opening up her home, and for her hospitality, we said our last Canadian goodbye before she called a taxi for us to leave for the airport . . .

and, as if British Columbia stay could not get better, this happened:

Meet this furry little puppy that was full of smiles and sunshine who bounded into my lap the moment the taxi door opened.

Listen, I don’t need to explain how I felt to cuddle a puppy the entire way to the airport — That feeling is all over my face . . .

His (rational) answer: “You do realize that not every taxi driver will have a puppy that wants you to love it, right?”

Canada is more than puppies in taxis.

Canada is wild and fresh and breathtaking.  Canada is alive and vibrant and has an energy you can feel as it courses through your veins.  Canada is adventure and serenity mixed in this bundle that is hard to describe but easy to experience.  Canada is not rumored to be the words “friendly,” “open,” and “passionate” but instead it lives by these definitions.  Canada is pure freedom in the most beautiful and simple way that can only be experienced underneath those grandfather trees or by the shore when filling your lungs with air as you breathe in.  Canada is all you need and yet still finds a way to brim with the ‘more’ that you only found you needed when you arrived.  But finally, Canada is also puppies in taxis and let’s be honest — Is there anything better in the world than all of this?

Back home, our plane landed and I felt both a bit empty and brokenhearted.  Already our trip seemed a dream.

“Oh wait,” I told Andy as we moved to pick up our bags.  “We can’t forget — We need to give Jeffrey our postcard.”

Jeffrey was our airline angel — He was the sole reason our venture was possible and so we walked back to the Delta desk and asked if the representative wouldn’t mind sliding our postcard into his box.  We knew it was a super small token, but we hoped it showed that we remembered his kindness and for that, we are incredibly thankful.

PS — A few months later, Andy flew out of the same airport on a business trip and he told me he saw Jeffrey.

“I remember you,” Jeffrey told him.  “And I’m glad you made it to Canada.”

Disclaimer: Due to COVID-19, I want ensure all reading know this trip was in August 2019 before the virus.

2 thoughts on “British Columbia’s Most Tranquil Bed and Breakfast”