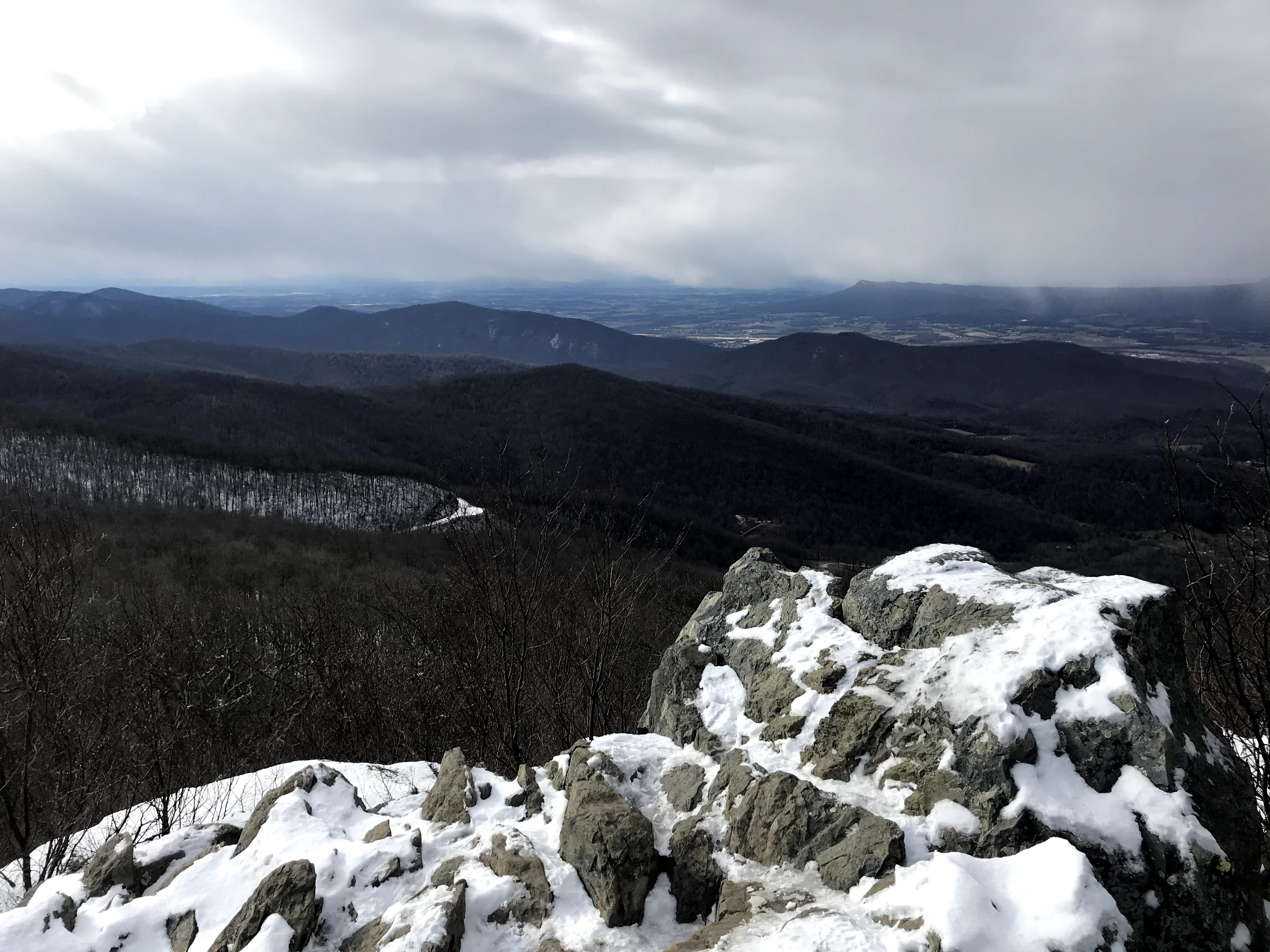 When I began hiking, my first trail was Hightop Mountain in Virginia. I still remember it clearly, too — The thick summer air, the inability to breathe, the fear I would die on the mountainside, the concern that I was born without knee muscles; and all of this somehow overshadowed by the fact that my hiking partner was Athlete Extraordinaire who felt the entire opposite of what I was feeling.

Vinayak was that first hiking partner, and we ventured out together on other hikes (namely ones where he literally pulled me up the mountain) but we sadly seem to have gotten separated on different trails. I still message him or hear from him occasionally — He is, no doubt, thriving as super-athlete — but I blame COVID for missing hikes with him.

Anyway, I loved Hightop Mountain (when I was at least able to get some gasps of air in my lungs) and I’ve wanted to go back, particularly because Andy has never been. Plus, I have this lofty goal of re-hiking all favorite hikes but in different seasons. With these two thoughts in mind, I take you back to January when it was snowing in Virginia — which means the perfect contrast to July’s stifling heat and my first venture up this mountain.

In truth though, when and Andy and I set off for this trail, it was a bit rushed — It was Martin Luther King Day and we heard of snow in the mountains so we packed quickly and set off for a hike that not supposed to be this hike — which is an echo of what I said earlier for our first hike of 2021. This was supposed to be Lewis Peak, a less popular trek with incredible cliff views. In our haste though, we did not pause to wonder if Shenandoah National Park would be closed on holidays and, as it turns out, it is. Without the ability to even drive on the park’s Skyline Drive due to locked metal gates, we pulled over at the entrance to discuss our options — We had already driven about two hours so we could venture to neighboring trails that did not require national park entrances but finding that hike would take time. Our other option was, of course, to turn around. Looking out from our car windows, we were both pretty glum and that’s when I saw a trail marker.

“And, that’s the start to Hightop Mountain. Interested in doing that instead?” and here I told him the facts:

This seemed to appease him and so we set off on the white blaze Appalachian Trail.

It seemed dozens of other hikers had the same ill-thought-out drive up and then idea to continue the one trail with access because numerous footprints had compacted the snow so much that it was thick ice instead.

“We had to bail,” two hikers heading towards the parking lot admitted to us the moment we got on the trail. “It’s too treacherous to continue with the ice.”

We paused. We talked. We debated — Questioning the whole while if we should continue. The trail was literally an ice rink and I found myself skating in my hiking boots far more than walking. Yet, we had time — There was no rush and if we, too, found it too dangerous then we could simply turn around also.

“Thanks — We will see how far we can get!” Andy said as we continued to skate our way up the path.

The day was cold but not that biting-bitter cold and once we reached the top of our initial incline, the mountain leveled off to clearly place our next ascent in front of us . . .

It was around here we realized the numerous hikers who originally started this trail did end up turning around because the rest of our journey up was secluded. Even better: This meant the snow was no longer heavily walked upon so it turned to a soft powder . . .

Up and up we continued, mostly without speaking and instead listening to the sound of our steps in the snow. All around us was silent and beautiful in the most simplistic way . . .

Soon, we arrived to our summit snow-covered view . . .

I learned there is history to this hike: In 1716, the Virginia Lieutenant Governor lead an expedition here after pressure from the British to expand the colonies. His group — which consisted of fifty other men and seventy-four horses — traveled west over the Rappahannock River and Blue Ridge Mountains. This trek was the first one over the Shenandoah Valley.

For Andy and me though, the whipping wind at the cliff edge did not welcome newcomers for long and so we said goodbye to this beautiful view and continued a little bit further up the Appalachian Trail.

“I’m just happy to be outside away from everything,” Andy told me, and I couldn’t agree more — The snow made the air fresh and pure and even though we had no destination past this, it felt good to simply walk . . .

Yet, the AT heads all the way to Maine and while Andy and I have talked about thru-hiking the white blaze one day, that day has not found a way to arrive and so we stopped at some point to turn back around. By then, the snow had melted and our trail turned to mud.

It is often hard for me to believe how far we have traveled, and therefore, it is remarkable the distance that can be scaled by simply continuing to walk . . .