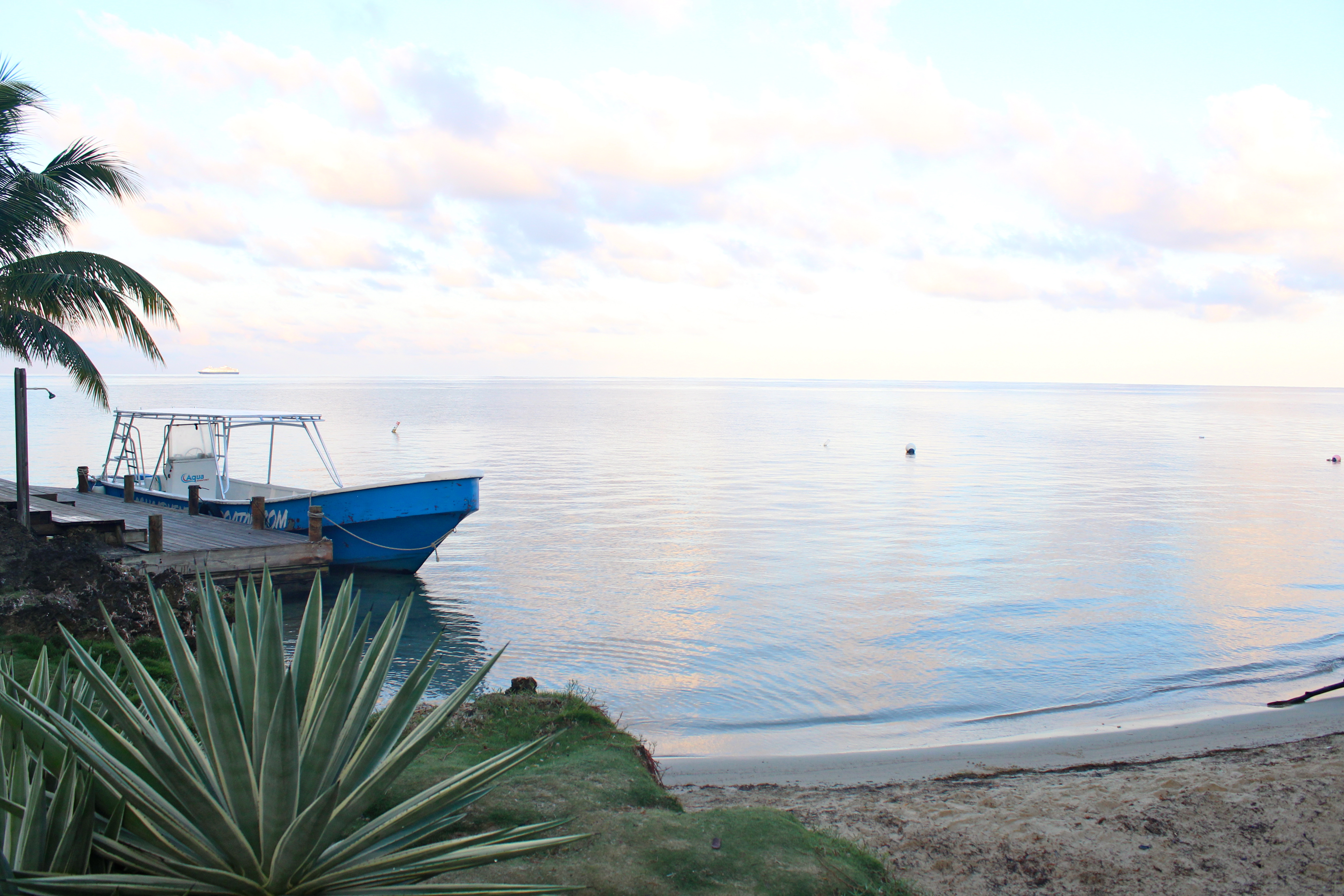 With the magic words of “right now,” Andrew and I raced to our bungalow to change into our swimwear because we were going scuba diving! This is me — beyond elated; and this is Andrew — petrified.

Then we were off, darting back to the dive shop . . . filling out forms that signed our life away . . . before following a woman we knew nothing about . . . into the ocean . . . to go diving.

“We will get in here.”  She pointed by the dock and boat.  “This is where we will go over basics.”

After a few minutes of information — “This is your regulator.  You breathe with this in your mouth.  Take a full, deep breath in followed by a full, deep breath out.  I will model first, you will watch me, then you will try and I will watch you” type-of-thing — we loaded into the boat and set off from the shore, cutting across the calm water.

I turned to Andrew — full of excitement — only to see him appear the complete opposite.  “You okay?” I asked.

“Whatever we do, I just don’t want to go first.  I’m scared to go first,” Andy confessed and that’s when it dawned on me that I was dragging him far out of his comfort zone.  Year One knowing me: Surprise skydiving.  Year Two: Surprise scuba diving.  Poor chap doesn’t know what to expect.

“Him.”  I pointed at Andrew, forgetting what he had told me minutes ago.

“I’m scared!  There could be sharks or something, Andy!”

“WOT!!!  Bloody hell, L!  Sharks?!?!  That’s what you wanted!!!” and without another word, he puffed and waddled in his fins, under the weight of his air canister, towards the ladder.

“Good luck!  You can do it!” I yelled from my seat before he cast a horrid glare my way.

(Let me say here — While I am writing this, I realize Day Two was not filled with my most shining moments.  I realize now I essentially forced one scared Englishman to go scuba diving . . . and made him go first . . . after I frightened him about sharks below.  Andrew, chap, I realize my errors and I do apologize!)

“Whenever you’re ready, take one big step into the water,” Anja told Andy from his side.

“Unnn ssshhhep,” he repeated, or at least I think repeated because he was biting down on his regulator so hard he could not be understood.

“Un shep.  Righ.  Un shep . . . ”  I was scared to glance at him for fear of another evil look but I took the risk only to see his flippered foot shaking in the air above the water before he’d return both flippered feet side-by-side.  “Un shep . . . ” He moved his foot back over the water, flipper quivering again.

“Chap?  You okay?” I asked.  I was nervous for him.  I did care.  I also did feel guilty because it was around here I realized he had said he didn’t want to go first.  “Want me to go first?”  Again, a nasty gaze.

“Unnn shhhep . . . Shish hs harer shn skhi-ivin!!!” he declared, which I took to be “This is harder than skydiving!!!” which also made me laugh because he was maybe three feet above crystal clear water on a smooth ocean and — let’s be honest — didn’t have a Navy Seal strapped to his back throwing him into the air.  “Righ!” he suddenly shouted, appearing to regain confidence as he did — what was that? — miniature squats because he couldn’t jump up and down with the weight of the air canister.  “Righ!  Un a cowt uhf shree!”

“Okay!” I said but only because Anja seemed more relaxed with his words.

“Unnn!” he whispered, mini-squatting again, shaking his fists in front of his chest at the water.  I wondered if he was about to fist-pump his chest — American-style.

“Righ . . . ” I heard the deepest inhale I have ever heard before a more guttural, deep growl of “SSSHHHREEE!!!”  Then — with a quick one-step — he fell into the ocean. Gone.

“ANDREW?!” I yelled after him, worried some unseen horrible event would happen to him and I would have to live the rest of my life knowing I forced him to go first on an extreme sport he did not even want to take part in.  How would I explain this to his parents?!  But then — as I was going through answers in my mind — I saw his head pop back up.   “Andrew!  Are you okay?!”

“Your turn,” Anja called to me, waving her hand in my direction.

“Right,” I told her, waddling to where Andrew dropped into the ocean.  “On three — One, two, three” and in the water I fell without a moment of hesitation, which I think is the reason why I prefer him to go first.  When I see him fall to his potential death, I have this massive guilty feeling that I should not have allowed the activity and the only way to rectify the situation is if I follow him — suicide-mission-style — into the air or, in this case, out of the boat.

“Hey!” I said to him the moment we were in the water beside each other.  “You okay?!”

“HAVE YOU LOOKED INTO THE WATER YET?!  Through your goggles!  LOOK INTO THE WATER!” and his face plunked into the water before popping back up.  “IT’S BEAUTIFUL!!!” and down his head went once more.

Thank God, I thought, feeling my heart relax.  He actually likes it!  So without another word, we waited for Anja before dropping under the water.

Our first dive at Seaquest Shallow left us speechless.  The water was calm and clear, undisturbed.  Not only that, but we saw a host of animals: lion fish, barracuda, lobster, and a massive snapper that stayed a couple feet away to swim beside us due to the fact that some divers bring bits of food for them.  Overall, it was incredible to say the least.  Andrew thoroughly enjoyed himself too.  “It was like swimming in a gigantic aquarium!” he — the-guy-that-loves-aquariums — gushed.  “It was absolutely amazing!”  You’re welcome, Englishman.

Anyway, that solidified it — Once we were out of the water and able to talk, we were going to become fully-certified divers.  We were going on that shark dive.

“To be certified, you need a total of at least four dives,” Anja told us.  That cut it close to the shark-dive date, which was Friday — six days away.  That meant if the weather was bad or the waters worse, we couldn’t afford to miss days.

“Right,” we said in unison and evidently on the same page now.

“Let’s start on the paperwork” and with that, Anja passed more forms for us to complete.  “Know if you say ‘Yes’ to any of these questions, you cannot dive.”  She said this simply, honestly, then disappeared inside the shop.

“Pst,” I whispered to Andrew after spotting a question further down.  Do you take daily medication? it asked.  “What do I do about the medication question?”  I knew if I checked the ‘Yes’ box due to my multiple sclerosis medication, it would cancel me out of diving; but I also knew if I said no and lied, it was my own health that was gambled.

“I was just wondering that myself . . . ”  His look was one of concern so we called to Anja.

“It is because some medications react to the pressure change,” she told us then peered at me and grabbed the first form we completed.  “How did you get away with this for your first dive?” she said more to herself.  That was because the first form asked something about medication for a specific illness.

Her shoulders slouched as if the forms let her down.  “Listen, it is your health.  I would contact your doctor” and she was right. I wanted to be certain Aubagio would not negatively affect me if I went diving.  We wanted to enjoy our time here — not return with more health issues.

Needless to say, we were stuck — stuck between paying a-dollar-a-minute for long-distance international calls to my neurologist and stuck because my doctor didn’t pick up whenever I called.  I even enlisted the help of my family, pleading in emails for them to obtain a letter of approval.  Until I got that letter, diving certifications and a shark dive was all a waiting game.

Not knowing if I’d get a written statement during our trip, we left the office and walked down the beach, enjoying more scrumptious food and drink until the sun exploded in color then slipped into the sea.

Full physically and mentally, we headed back to our cabana in the dark, attempting to dodge massive crabs that jittered over our toes.

To me, crabs are essentially enormous spiders — though harder to kill due to their shells so in terror, I flung myself onto Andrew’s back and forced him to shuffle our way back as we laughed the entire way.

And here’s proof of our antics: We didn’t mean to take this picture.  Andy meant to get a shot of the crab but, because it was so dark, he didn’t realize the camera direction was wrong until the burst of light illuminated us.  I secretly love this image because it isn’t posed so it captures how happy we truly are.