It was November as Andrew and I drove to the Shenandoah Mountains and watched as the bare brown trunks of trees blurred past our car windows.  Leaves that had once been bursting with color were now drying on limbs before slipping to the ground. 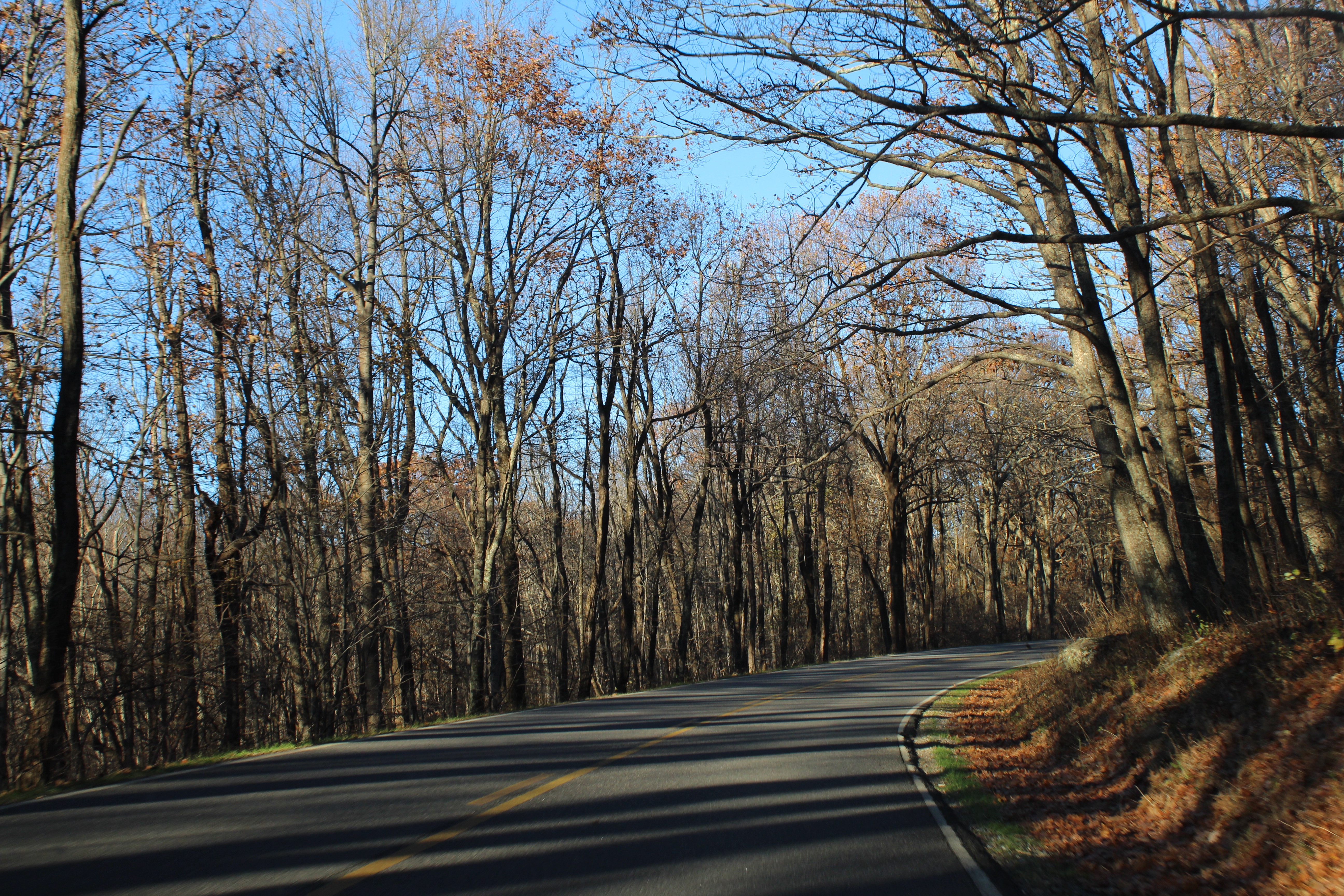 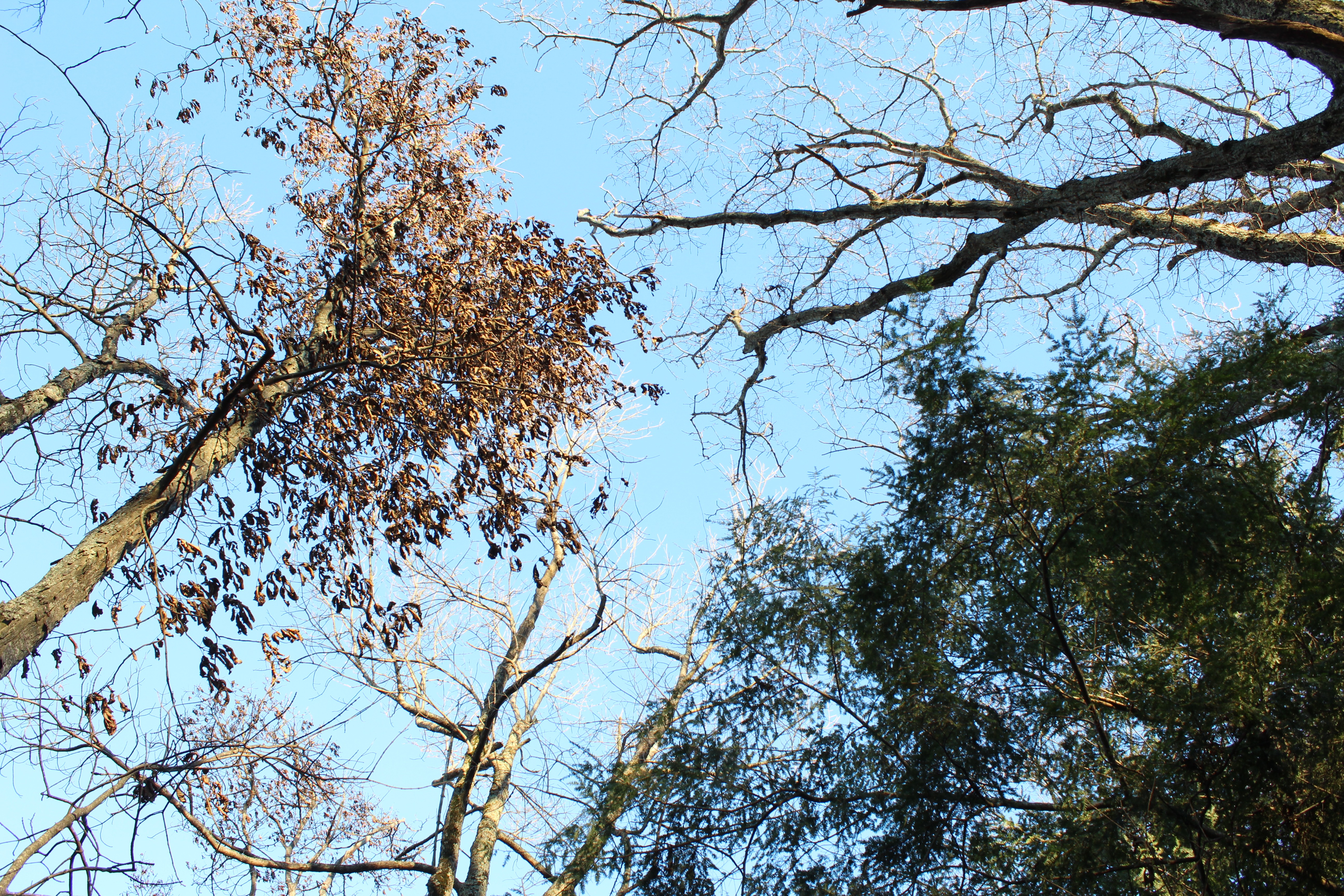 It was cold, too — a frigid day for a hike but the sky was blue, clear.  And that is the reason we came: We were seeking a sunset.

The Blue Ridge’s Bearfence Mountain is one of the most popular hikes in the area due to its incredible 360-degree views at Bear Church Rock.  Plus, it packs this easy trail:

It’s not often we come across hikes we feel would be simple — We often irrationally push ourselves and our will to survive outdoors.  However, with the drastic drop in temperatures, we were more than happy to set off late for a short-distance hike and be rewarded with this mountain’s fabled sunsets.

It was the afternoon when we arrived and the sun cast burning yellow and orange rays on our steep blue-blaze Bearfence Trail. 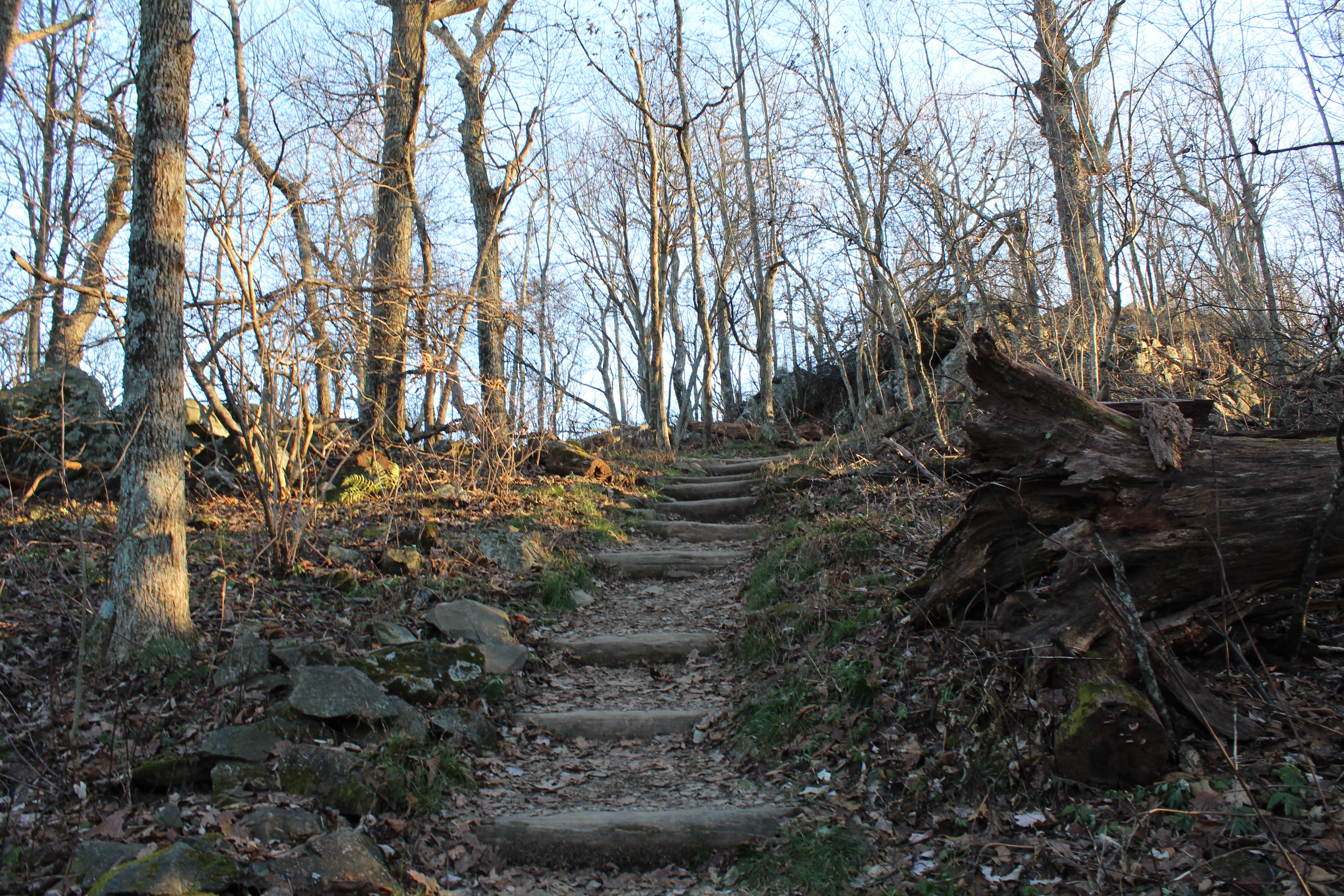 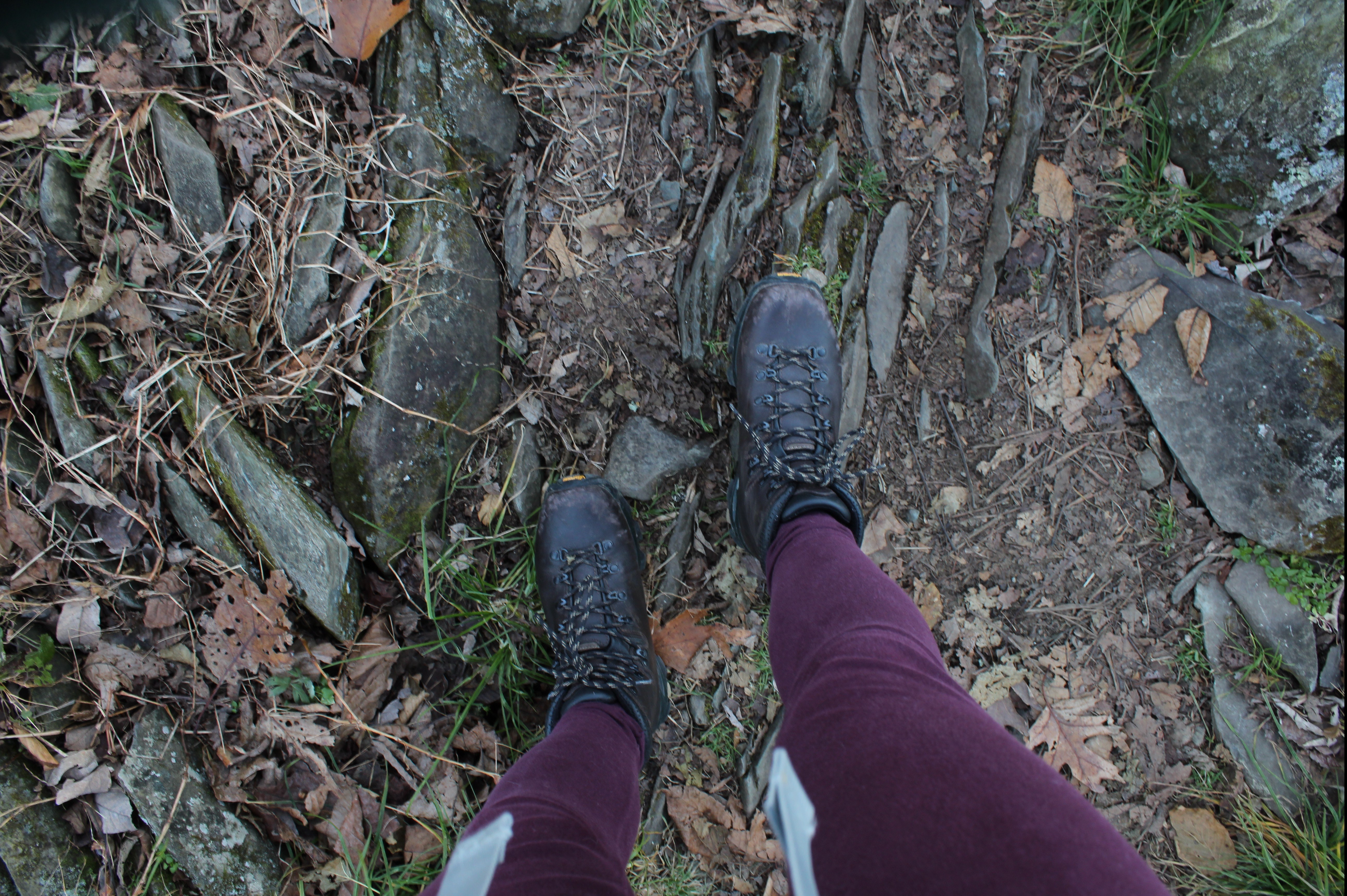 The naked trees allowed us to peer past and see the neighboring sun-kissed mountains. 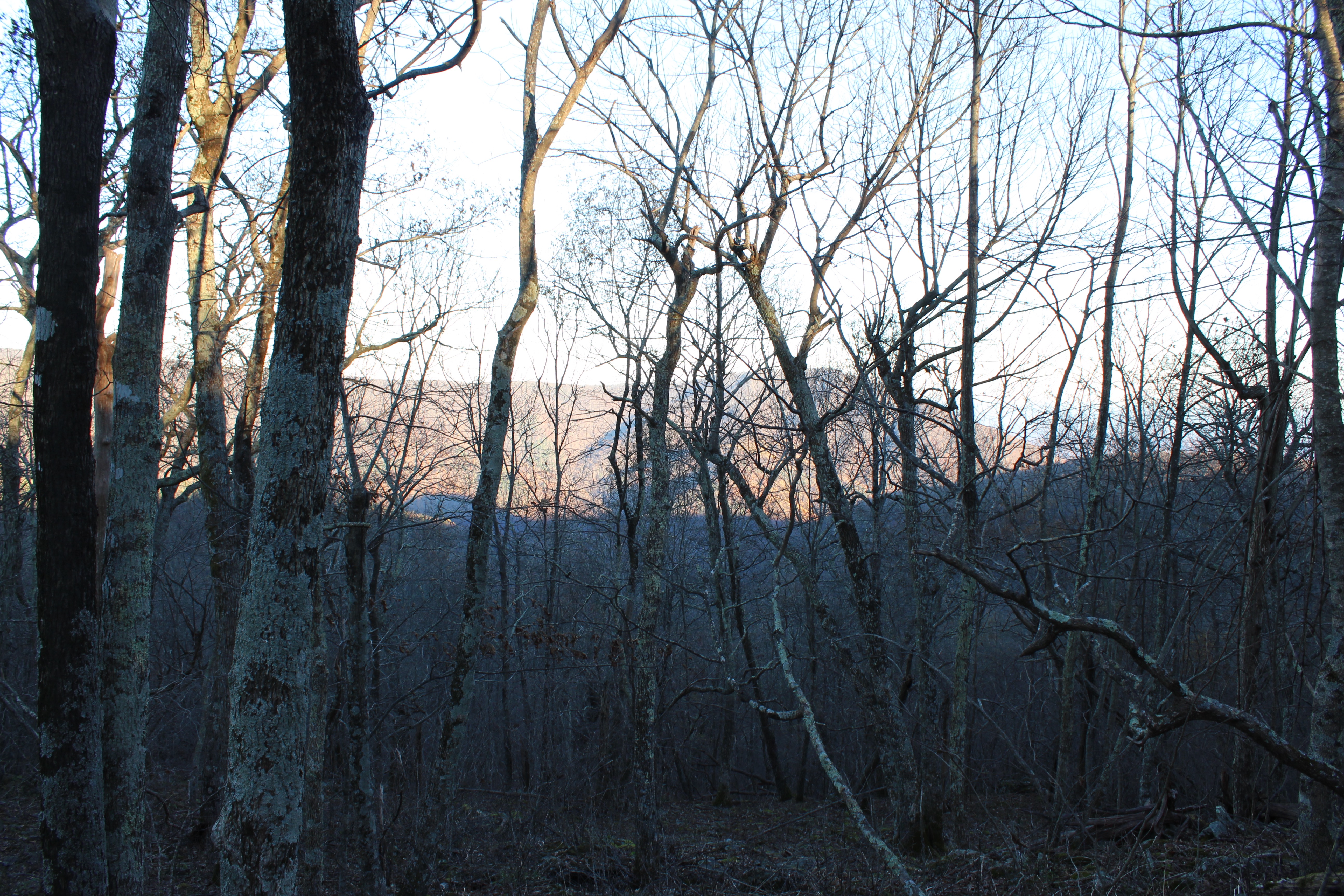 After a short while, our hike turned into a rock scramble as we raced to climb the summit of Bearfence Mountain, chasing the colors in the sky.  The higher our elevation became, the more air grew cold around us.  Bundled snuggly in layers, we moved our gloved hands towards our faces to tuck our buffs under our hats for more warmth.  Only a sliver of skin showed as my eyes peeked through to ensure Andrew was okay and continuing to follow me. 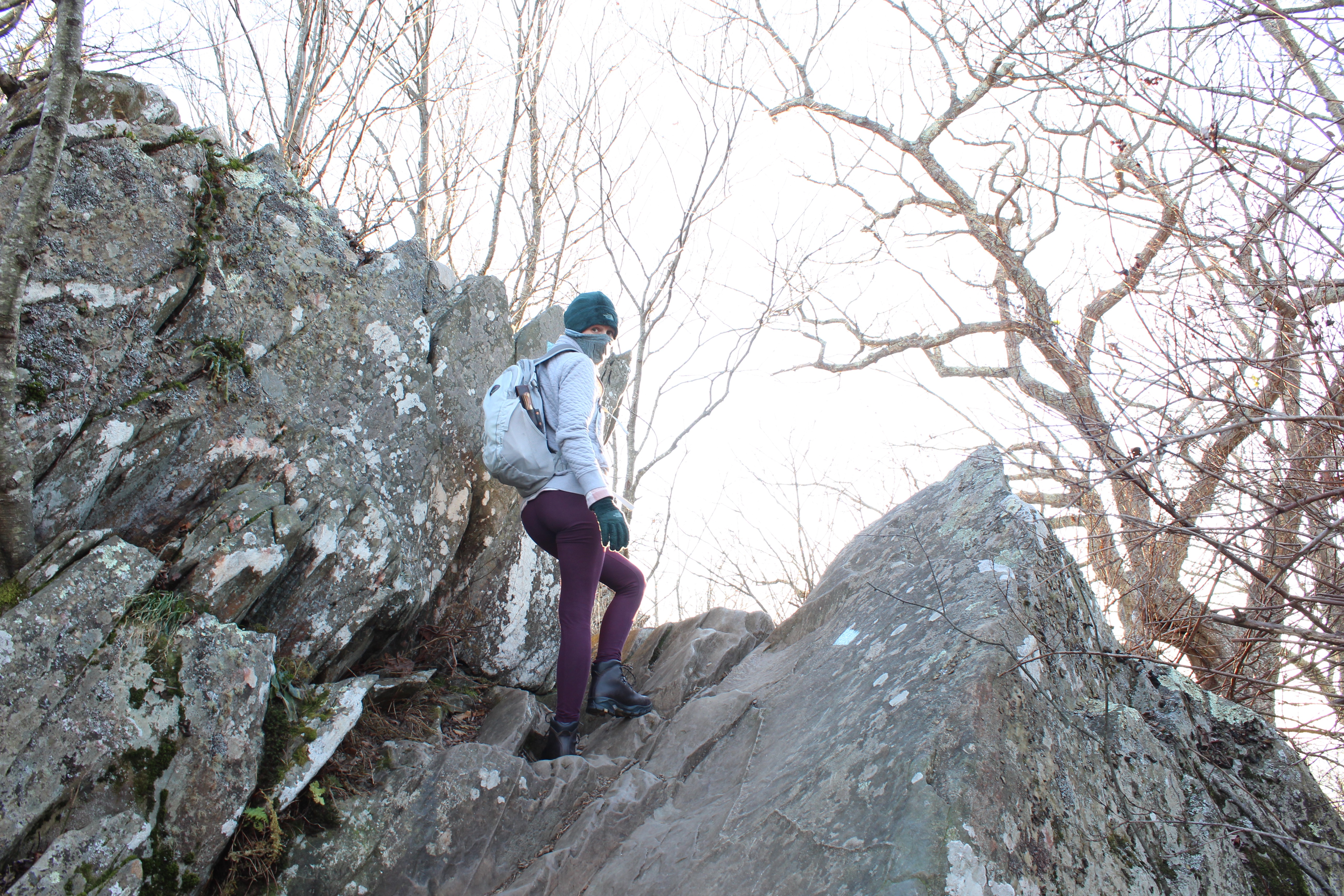 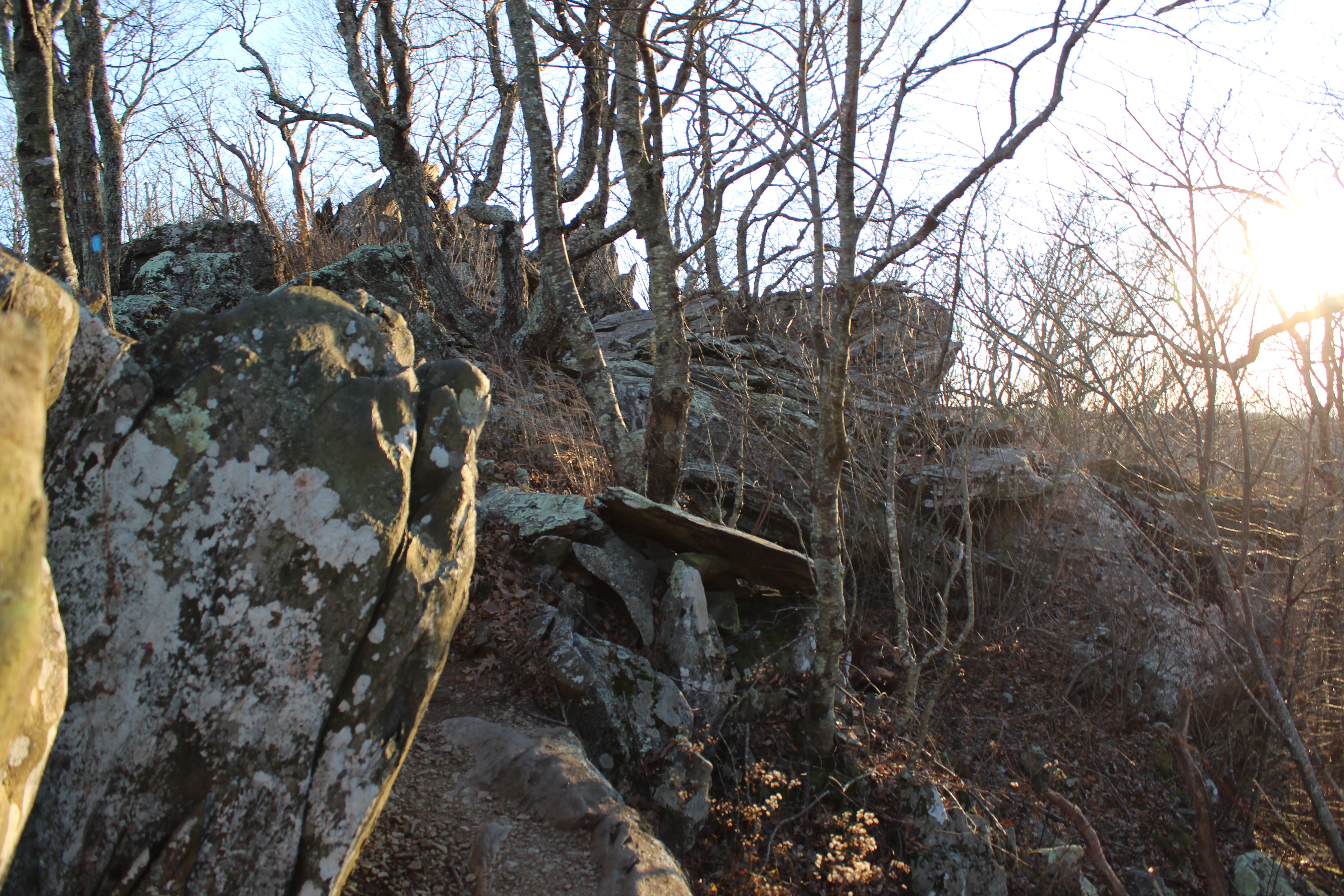 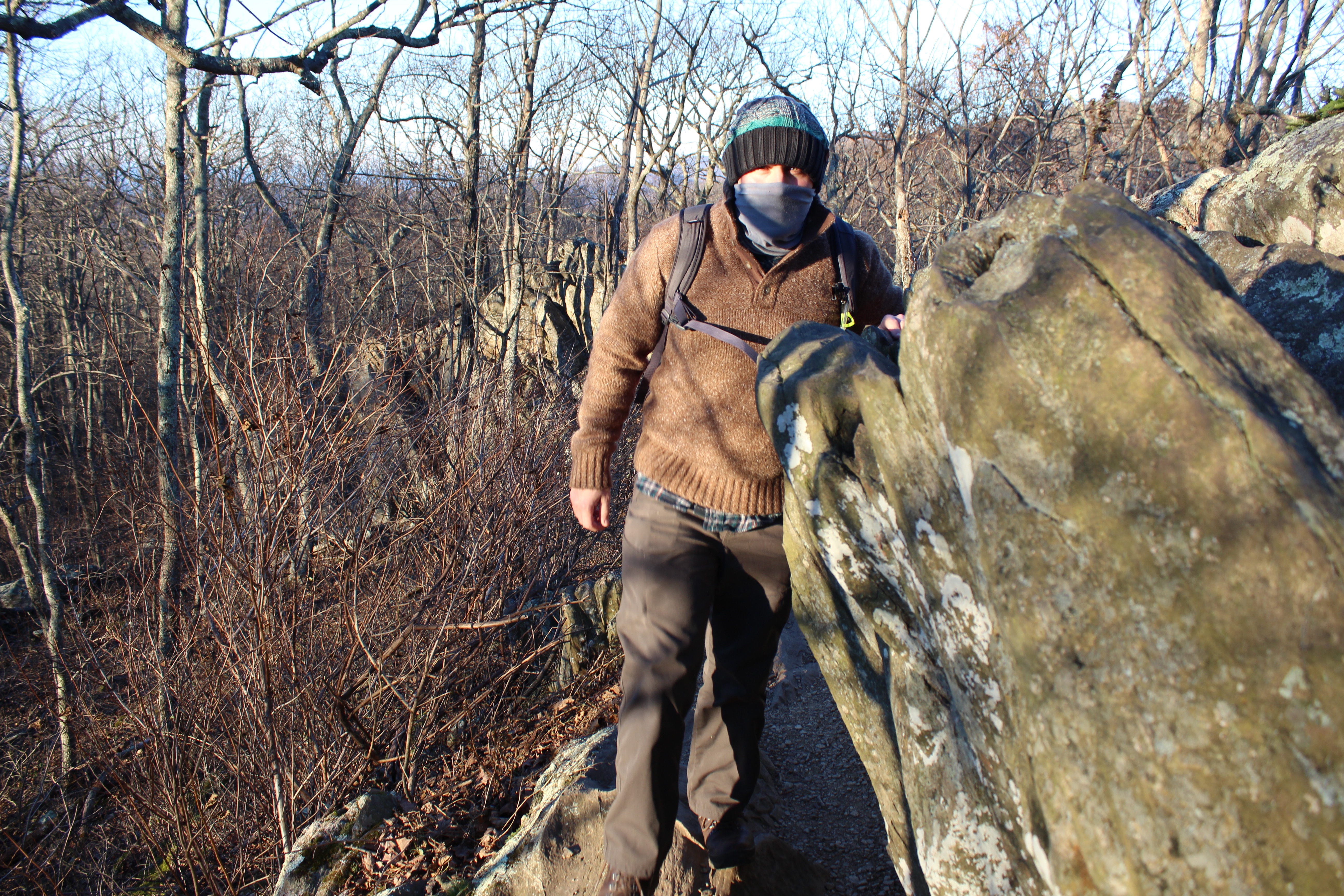 Blue blazes were painted on the rocks, encouraging us to continue to climb higher . . . 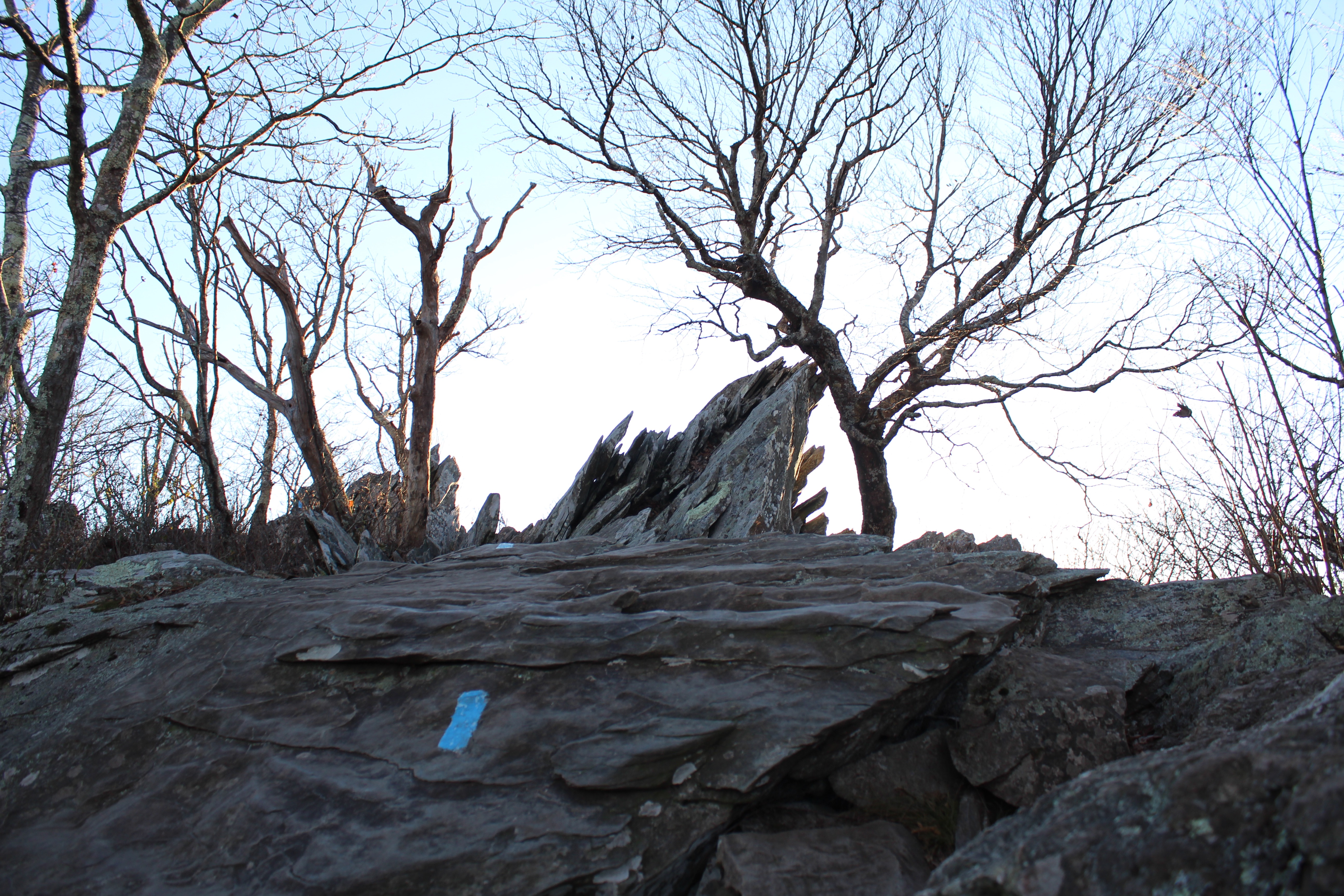 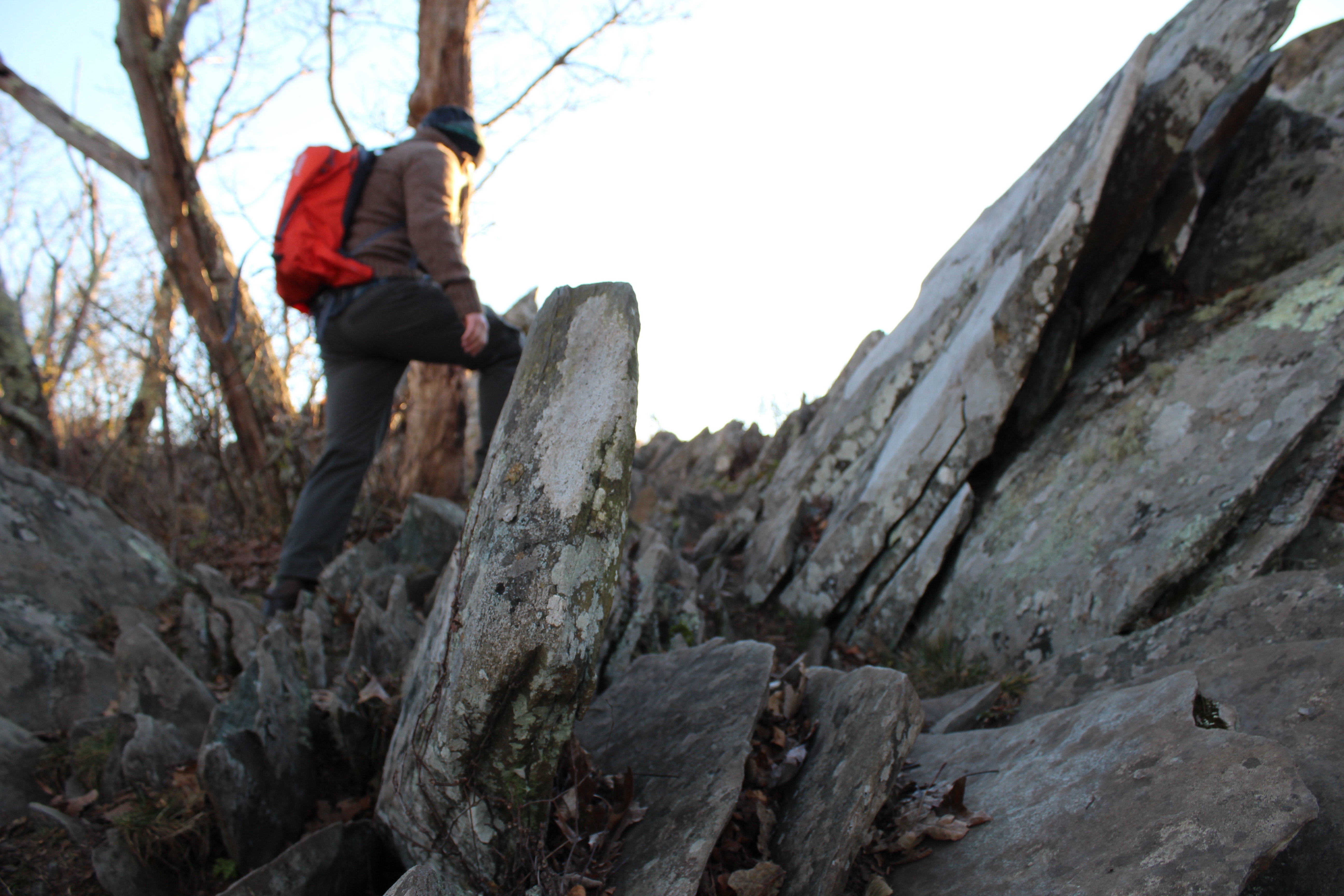 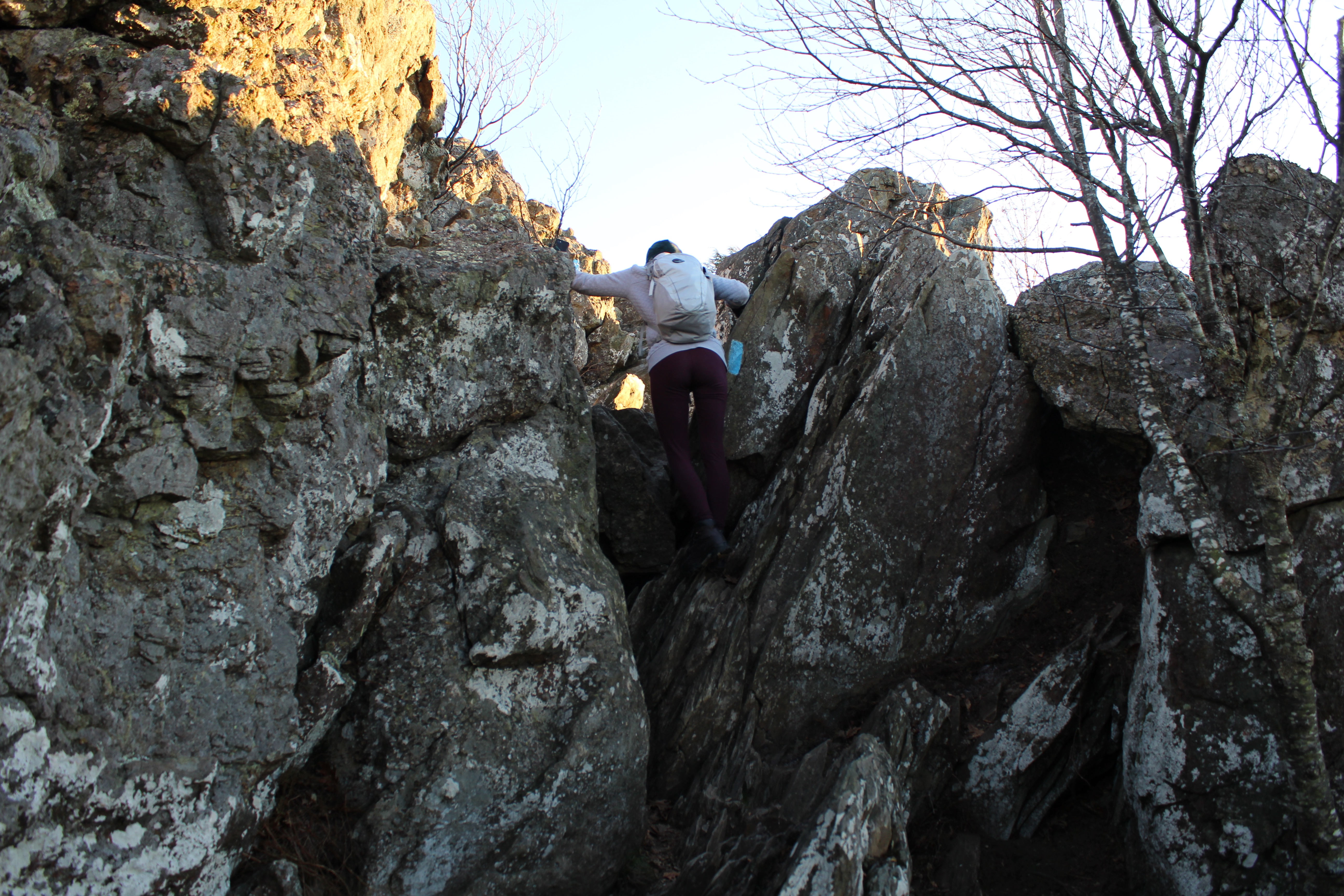 until all too soon, we stood at the top of the summit where golden sunlight welcomed us by warming our bodies.  There, we dipped to sit on the rocks and look out at the view. 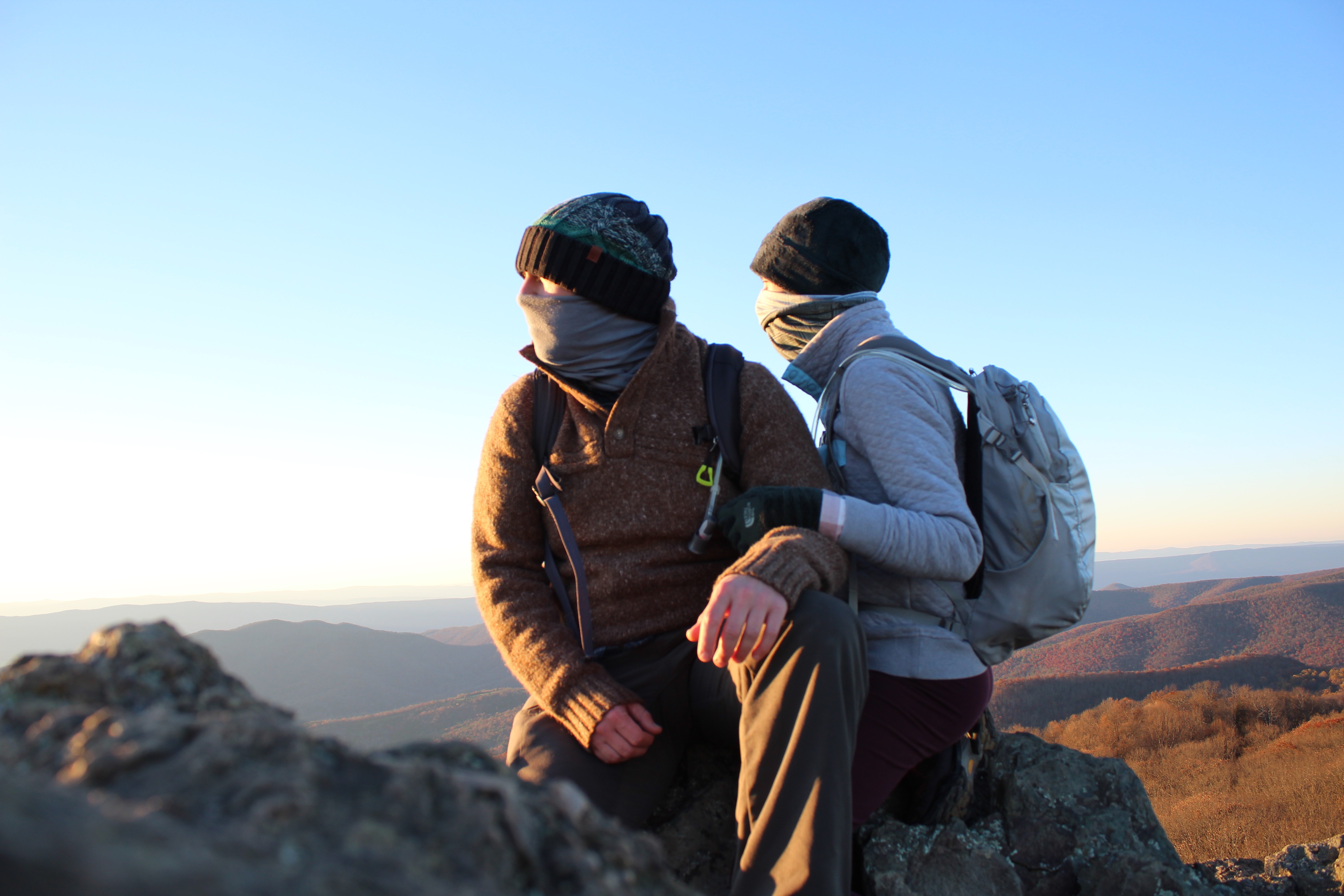 This is reportedly only one of three summits that has a 360-degree view, and words will never be able to describe how breathtaking the sunset was — The darkening mountains appeared to cast off a yellow glow that faded into the blue sky and the forest around us took on a vibrant crimson and burnt-orange color. 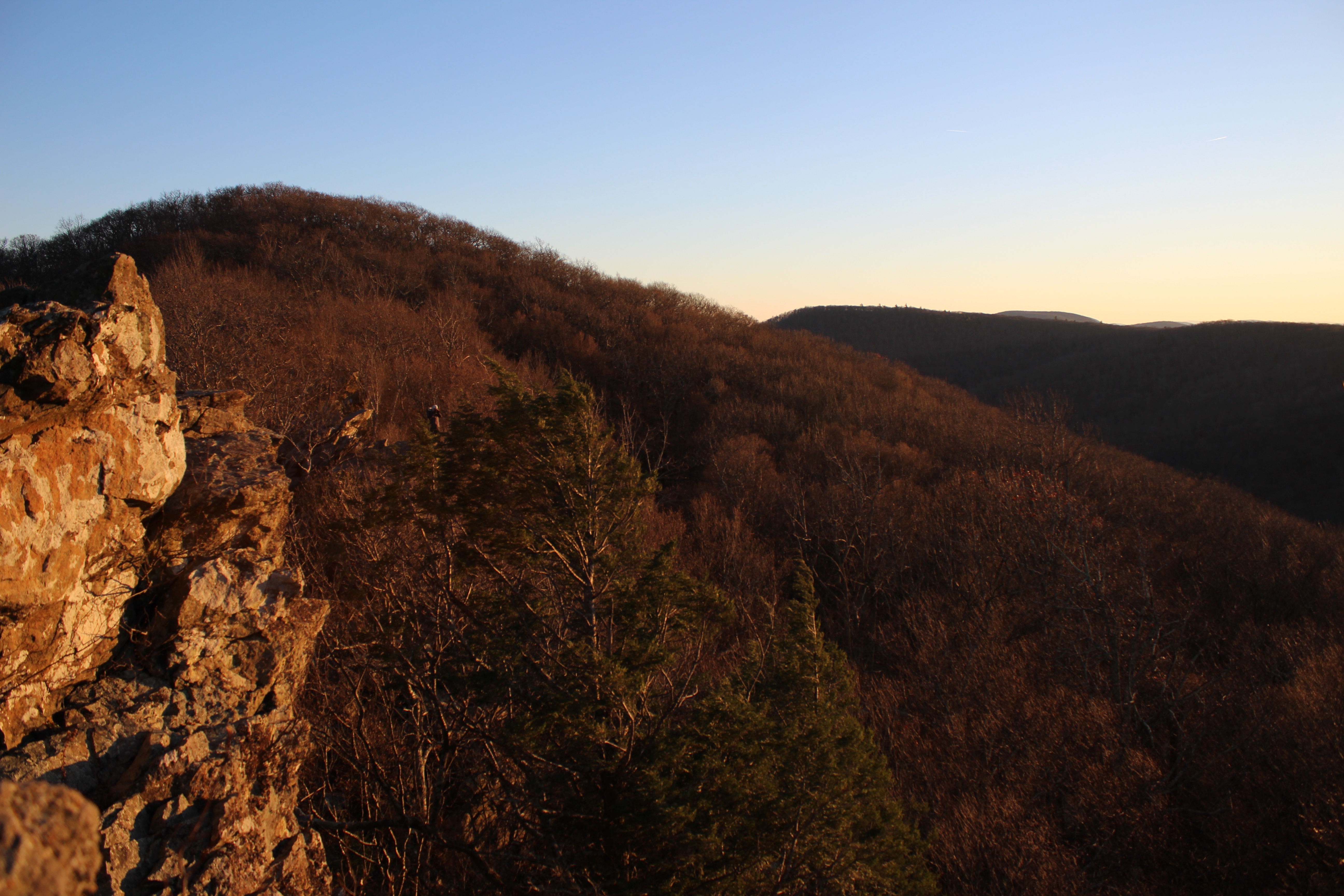 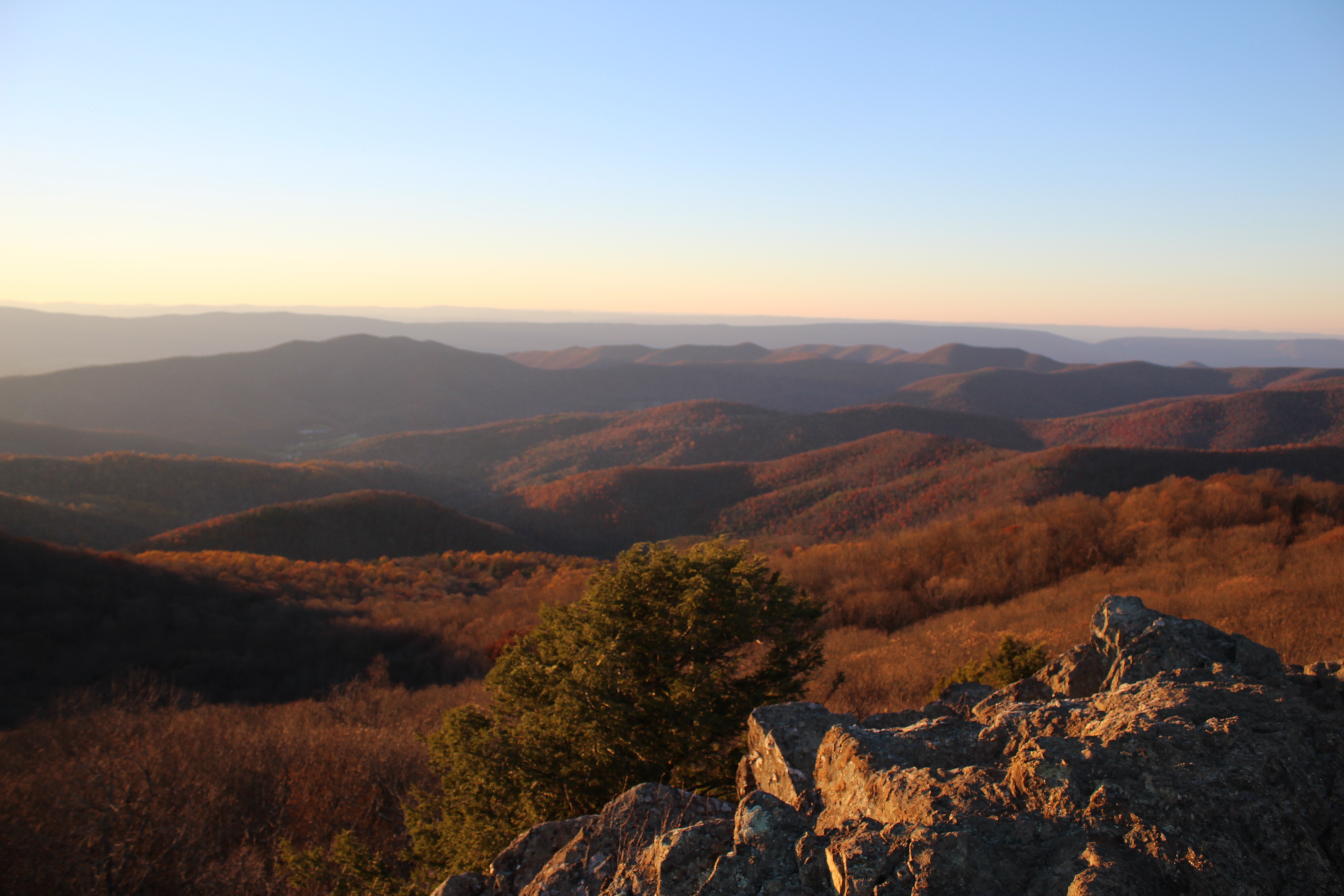 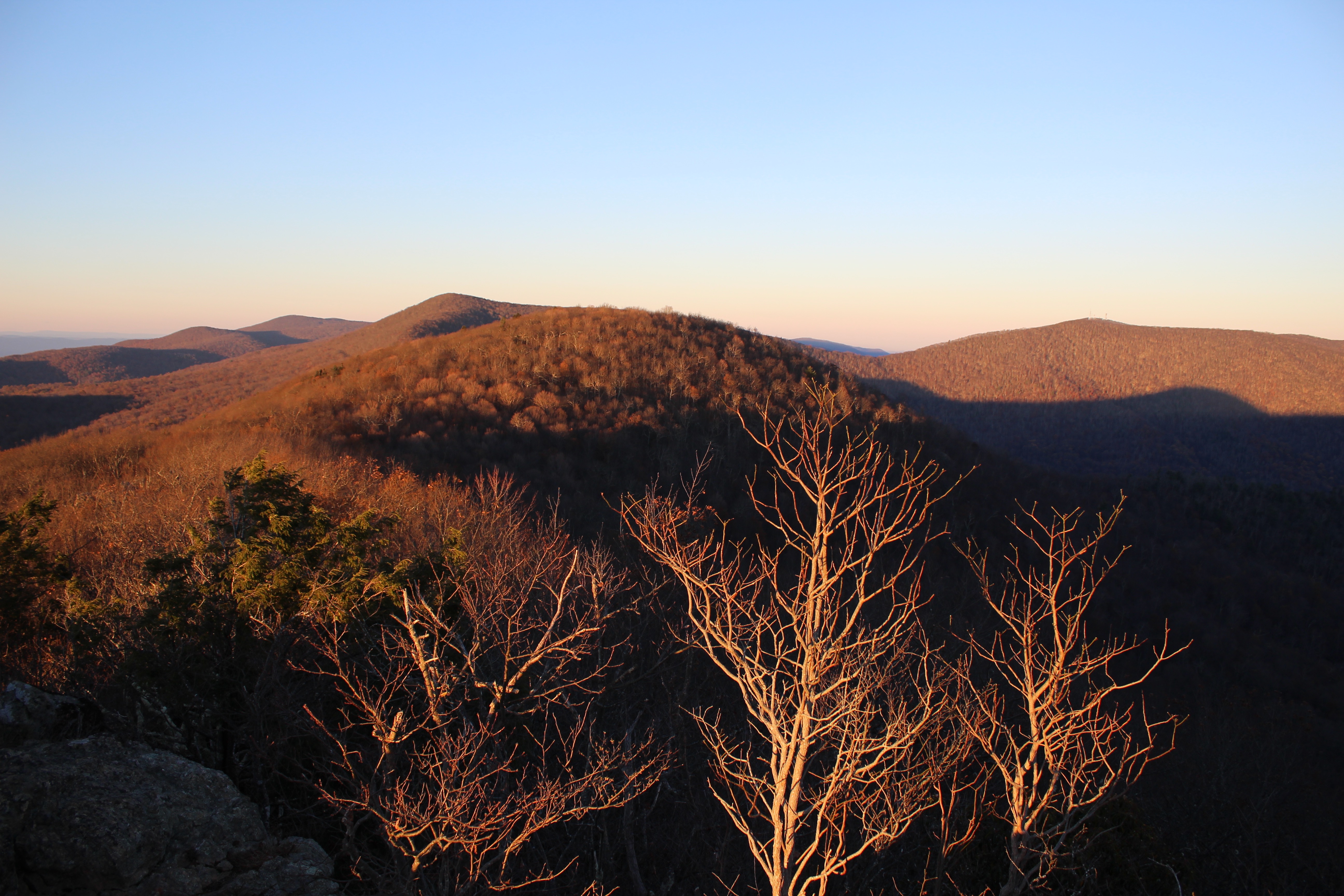 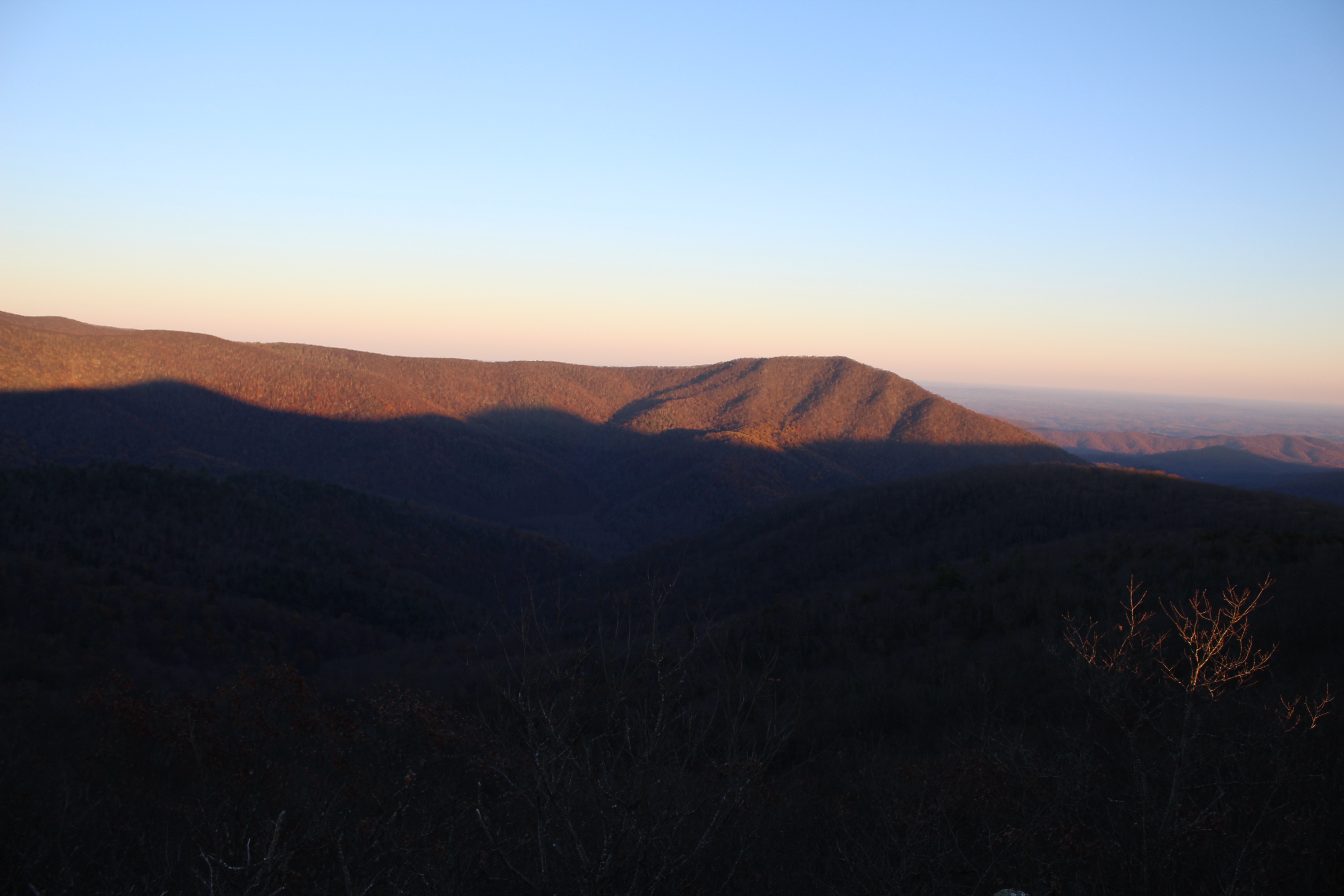 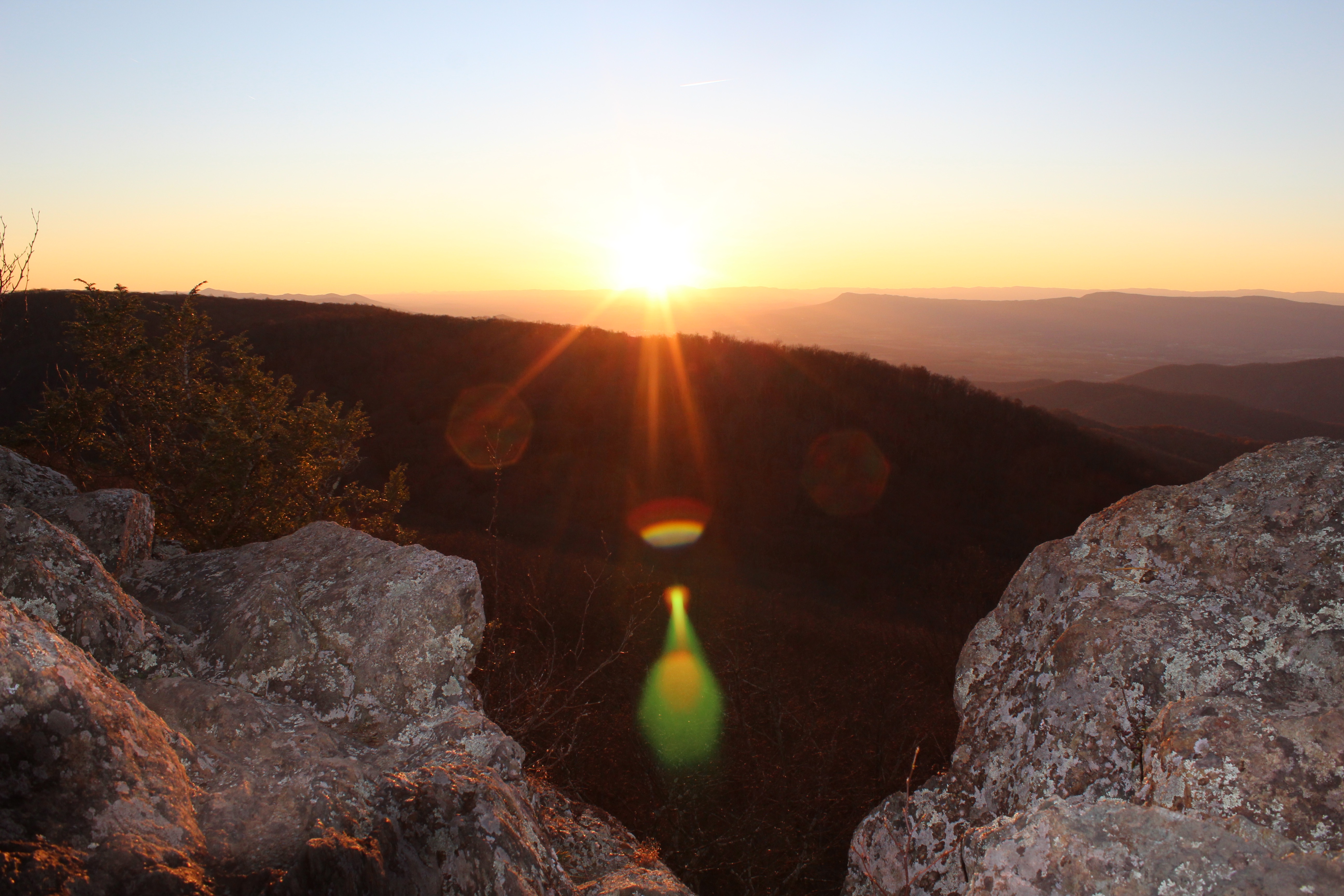 The distant mountains began to turn from blue to purple to pink while the sun continued to sink still, burning, burning, then exploding. 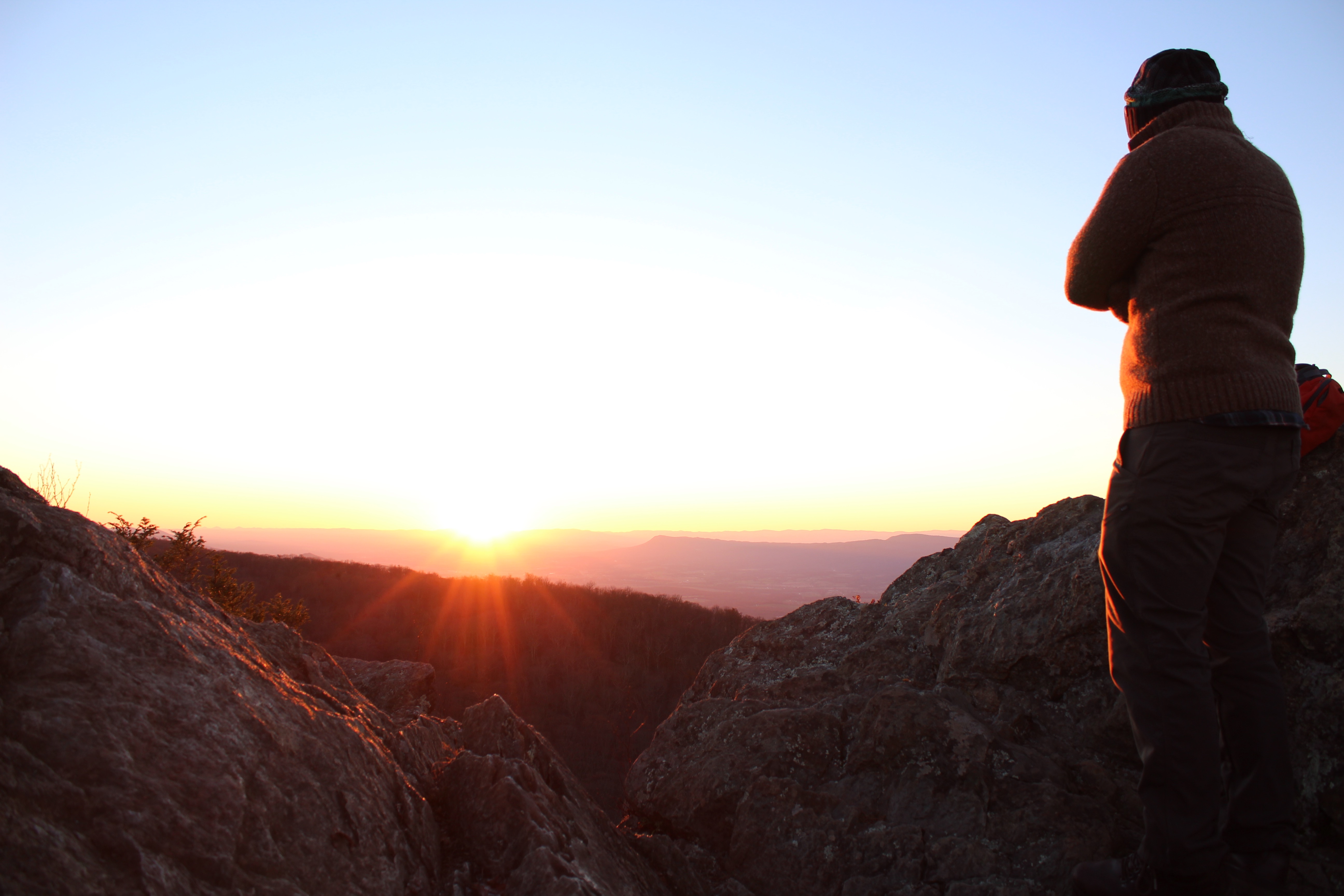 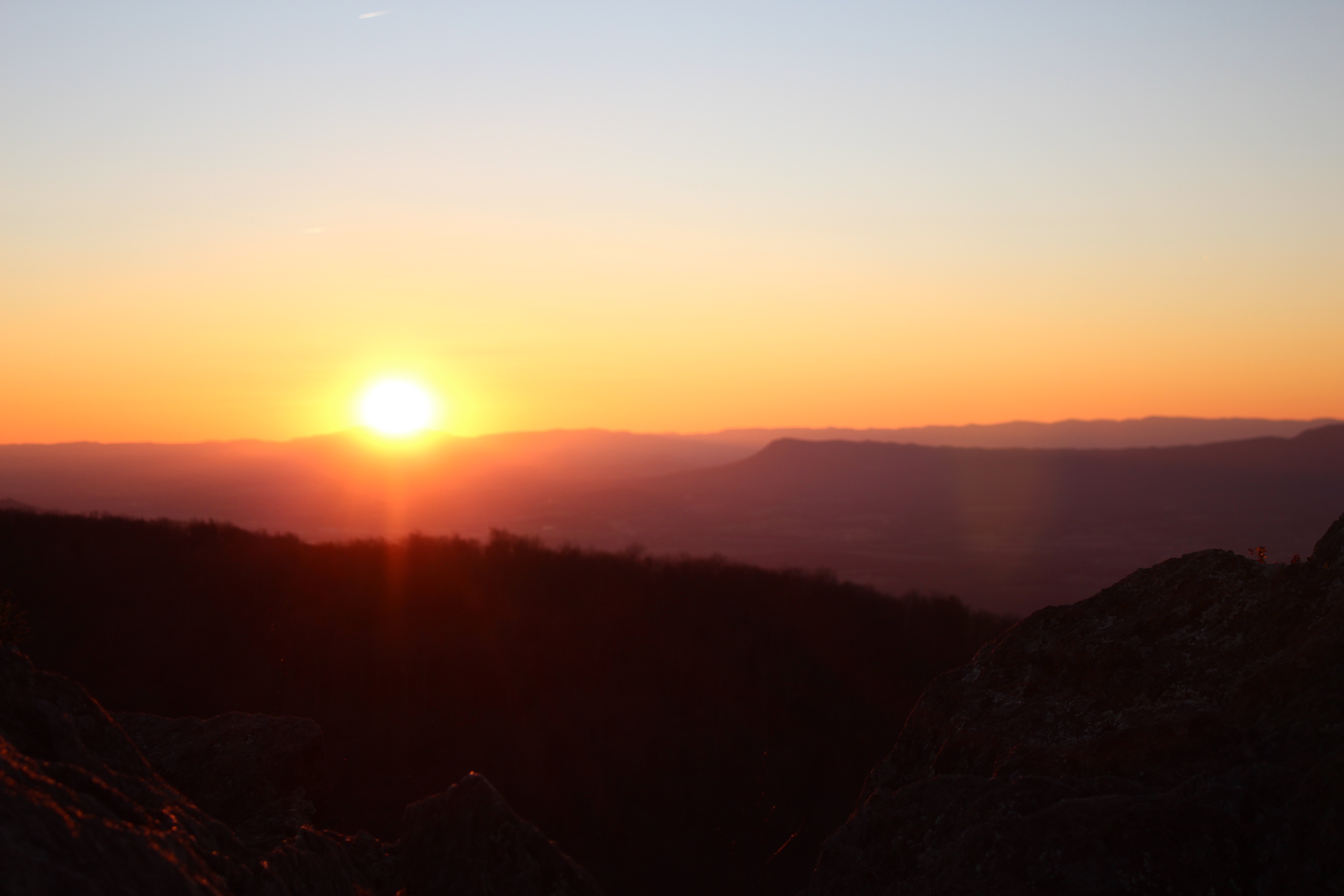 Above our heads, planes glided in the evening sky as shooting stars.  One, two, then three zipped and zoomed as I closed my eyes, imaging a simple world where wishes could come true based off of the puffs of jet vapor trails. 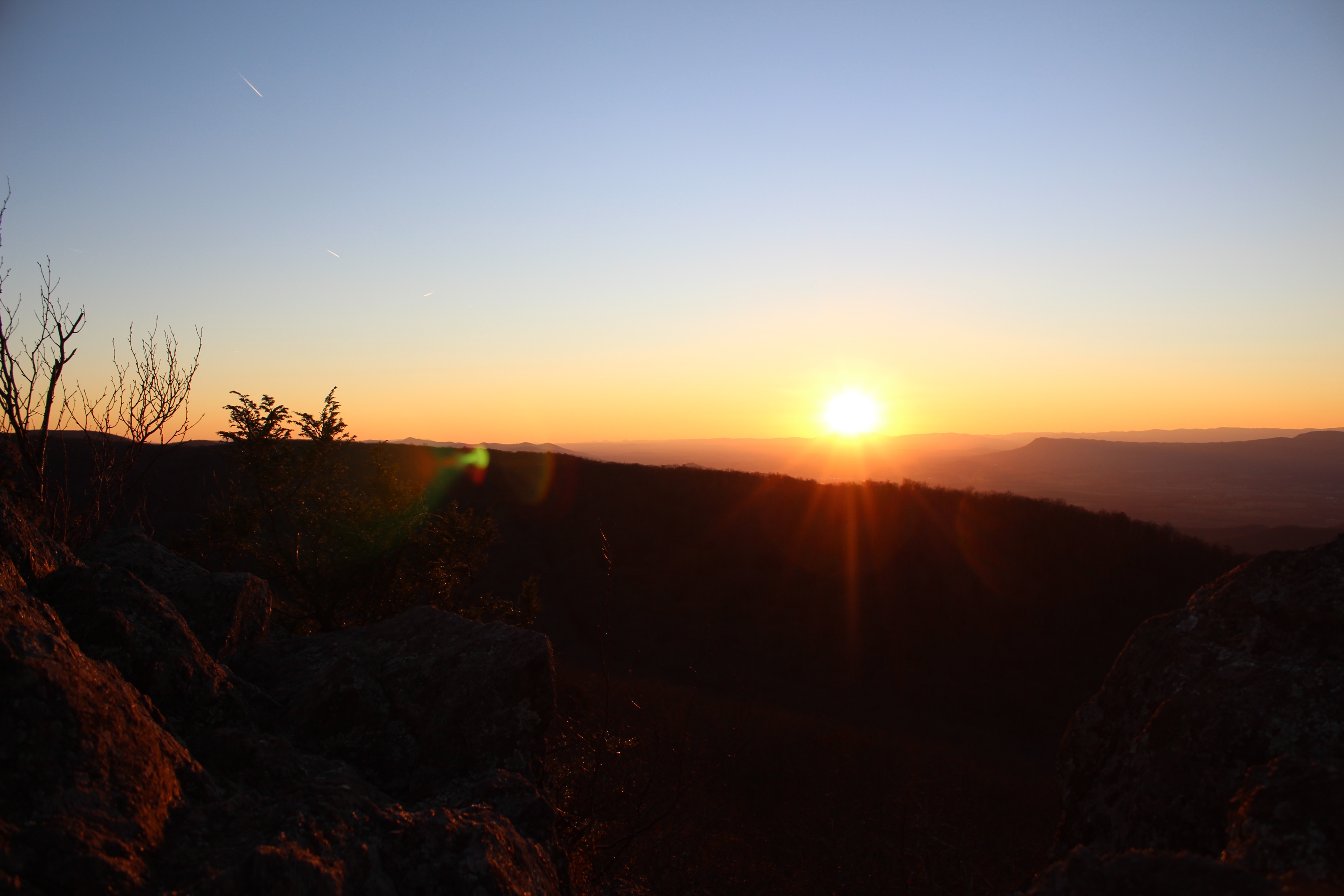 We watched for what felt like hours but was mere minutes — a blip in time — until the sun disappeared behind the peaks, illuminating all in one final fit of glory.  And then it was time to go — to find our trail again and leave.

“Com’on,” Andrew called ahead of me, encouraging me to continue dipping down the mountain too but I couldn’t stop turning back to look at the colors. 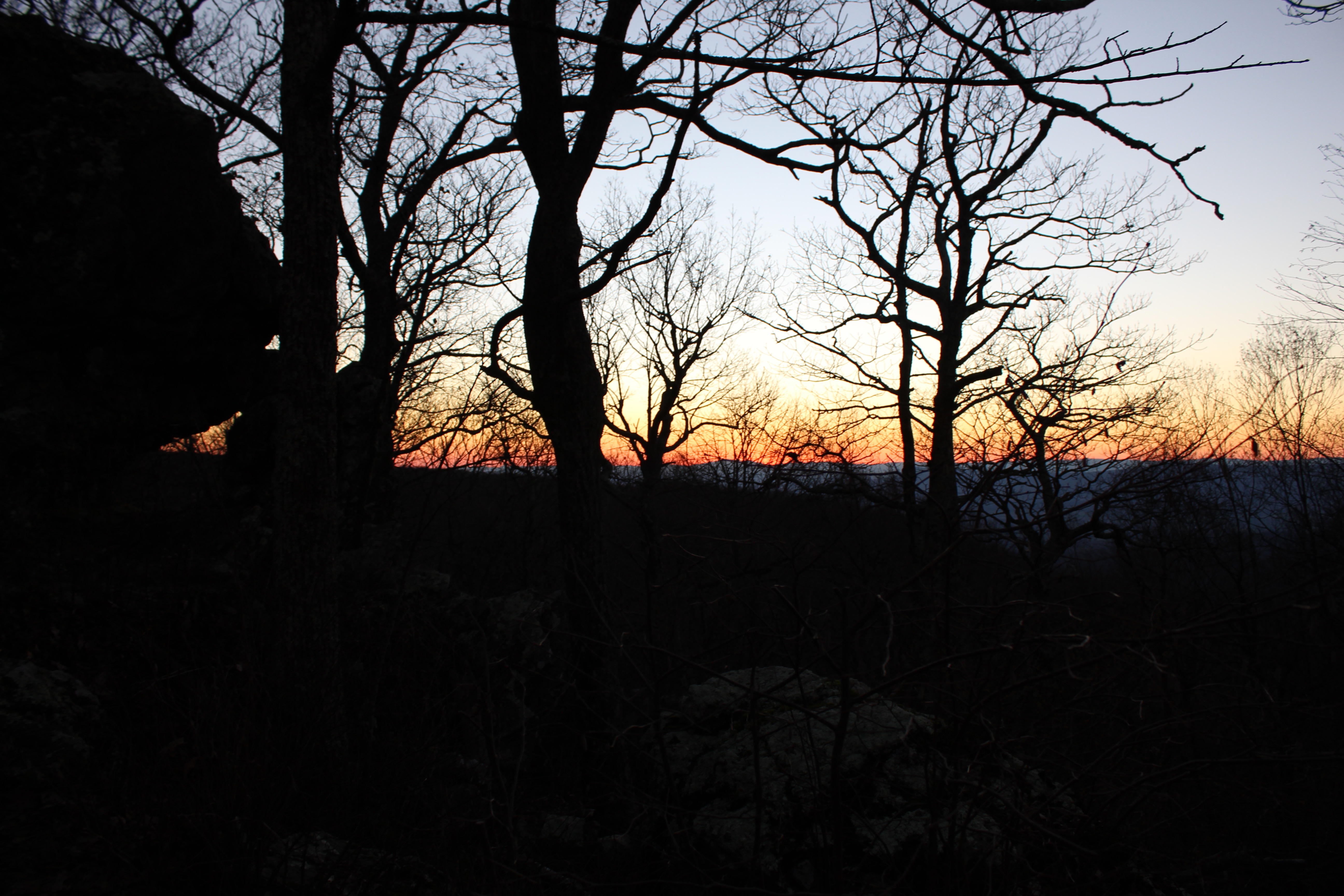 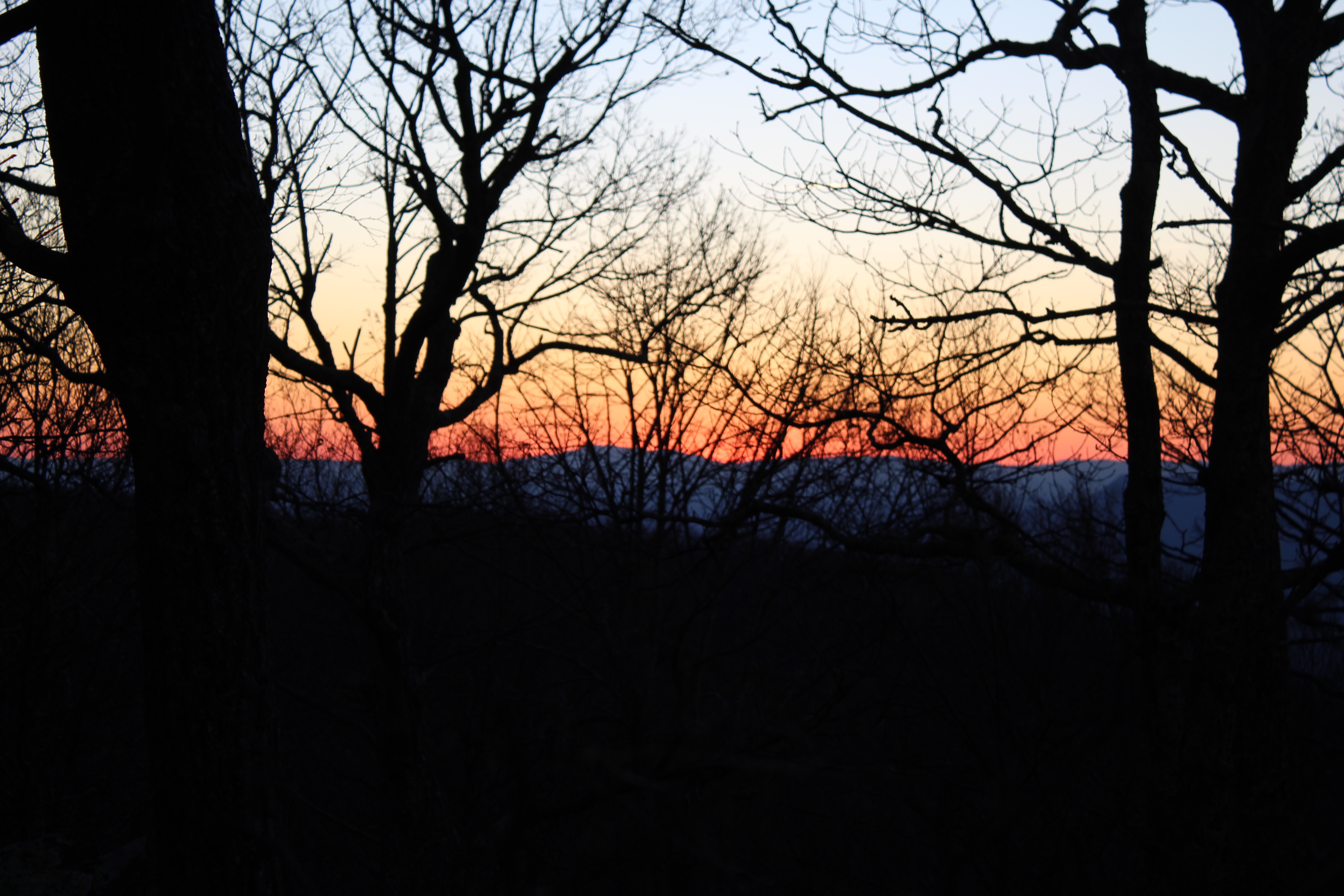 The sky was on fire and I was addicted to watching it burn. 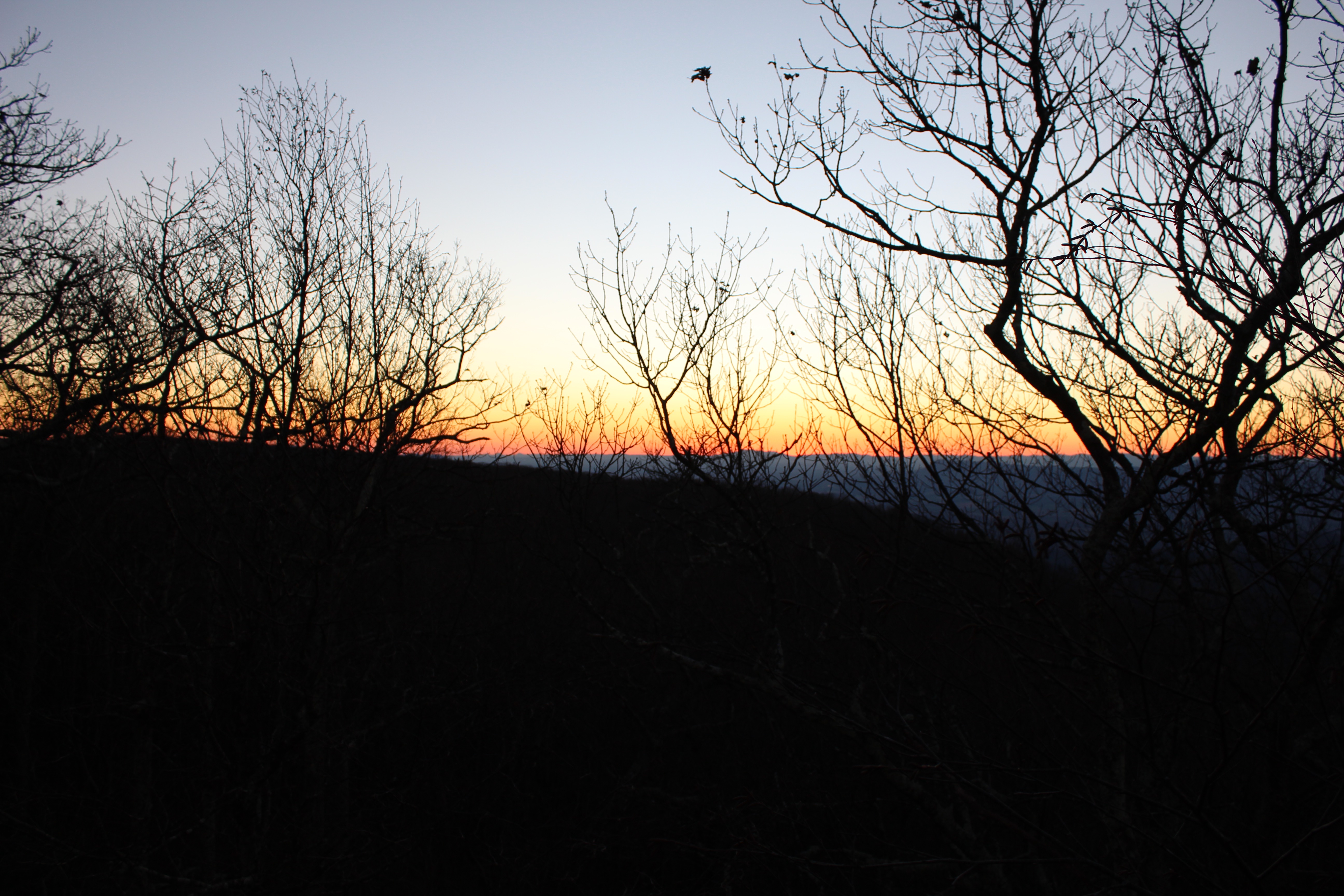 By the time we got to the car, night had settled in and a sliver of the moon beamed against the midnight sky. 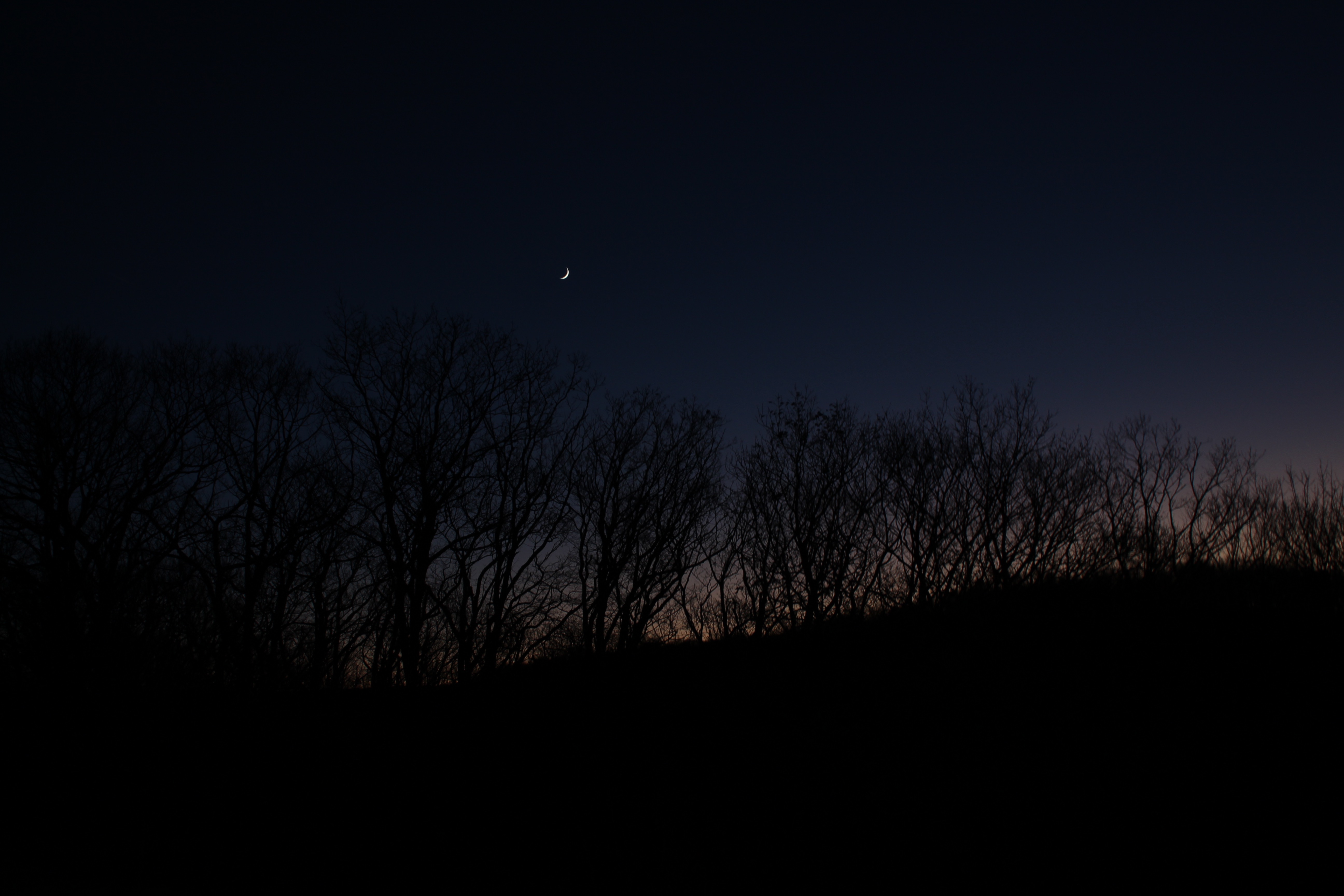 “Pull over,” I begged again and again of Andrew as we raced, twisting and turning through the dark Shenandoah Mountains.  “I just want one more shot” and I’d lean my body out the window into the freezing night air for one more picture then one more still. 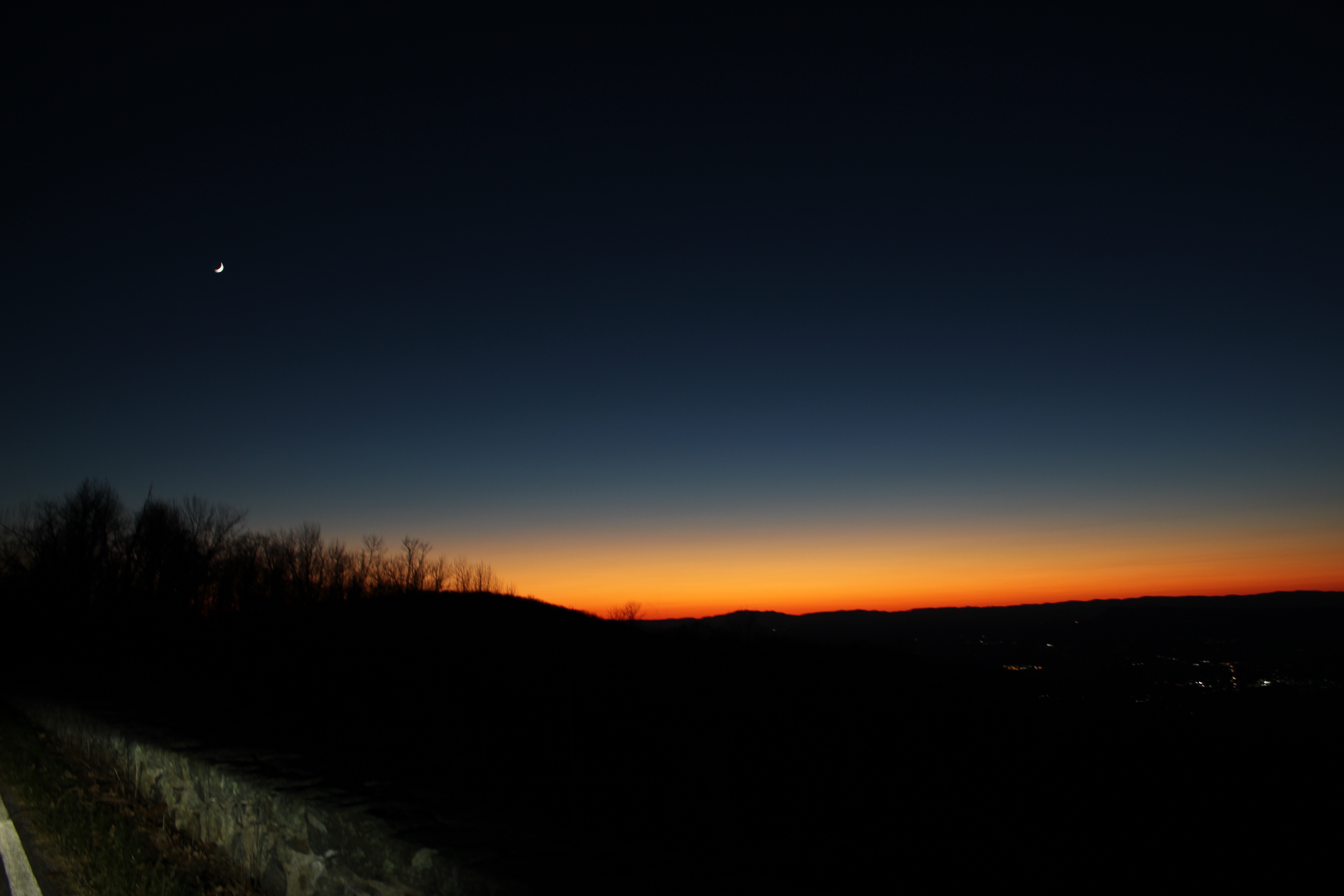 Andrew laughed the whole way.  “One more?” he said, but he didn’t mind.

This is our home.  This is where we feel most comfortable — where the sun and moon shine together and where colors are at their prime.  This is where the world stands still but also blurs by and we grasp — keep trying to grasp — that moment where we, too, can freeze in time. 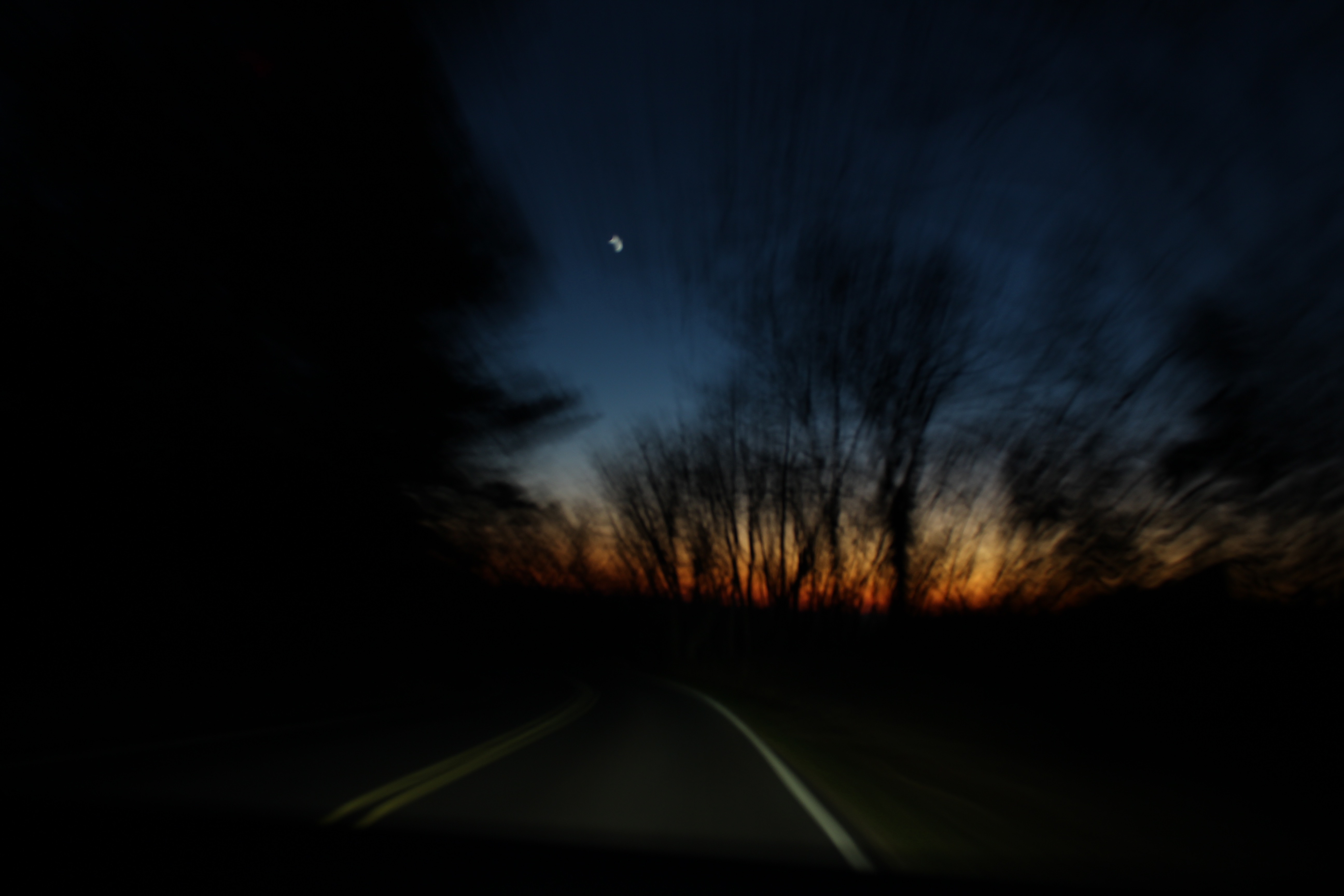