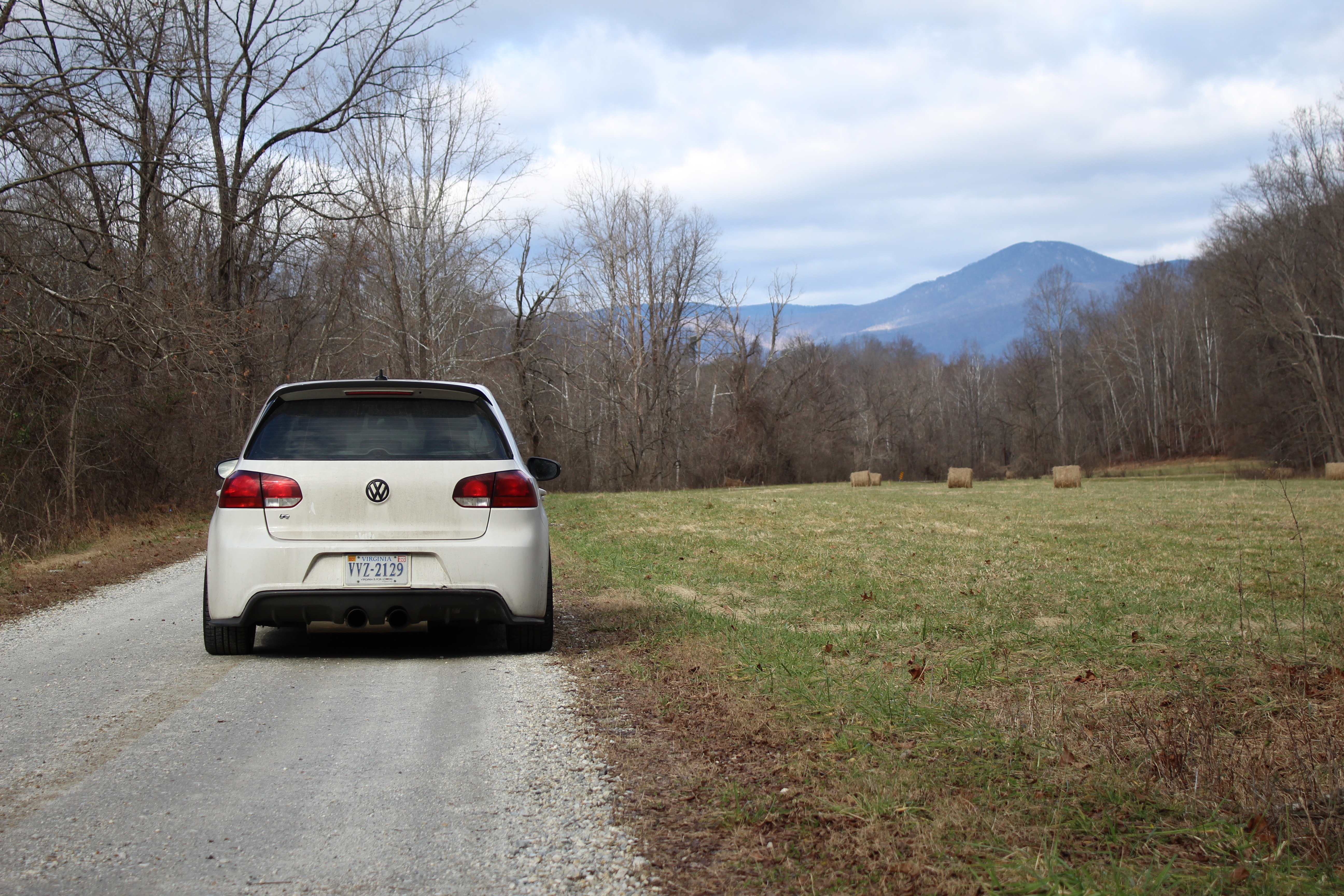 Temperatures were continuing to drop as Andrew zig-zagged down one-lane gravel roads towards our mountain.  In the distance, the blue of the ridge was dark against the sky.  The color was a cold blue, and I shivered despite being in a heated car.

“Below freezing,” Andy said to me, as he always does, my meteorologist.

Our hike was a short one and well-known in George Washington National Forest, which is why we felt going in the middle of winter — to avoid crowds — was a smart idea.  Here, we were on our way to Mount Pleasant:

When we arrived, there was only one other car in parking lot and our trail appeared even more empty, without a hiker in sight.  The naked trees let out occasional creaks and moans around us, as if they too were trying to adapt against the cold, but otherwise the forest was silent.

“Let’s go,” we said together and began walking with footsteps that seemed too loud as they crunched dried leaves.  I felt I was shouting in a holy place, and I became eager to hear birds, bugs, animals — something — but all had vanished.  We were alone.

In the distance, the mountain’s ridgeline peeked between the many spaces of leafless trees.  Andy began to lead the way, passing bright green moss that lined the trail. 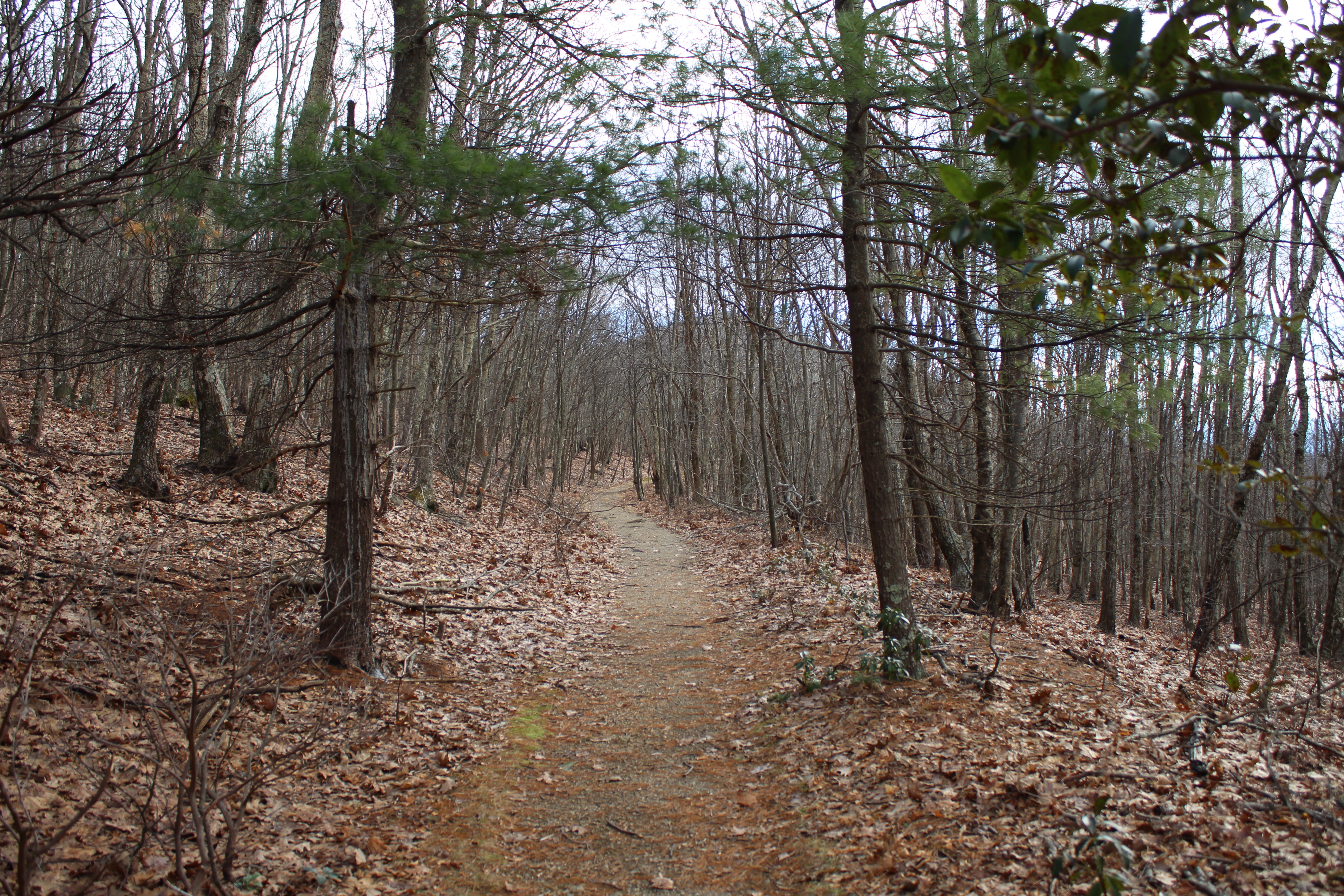 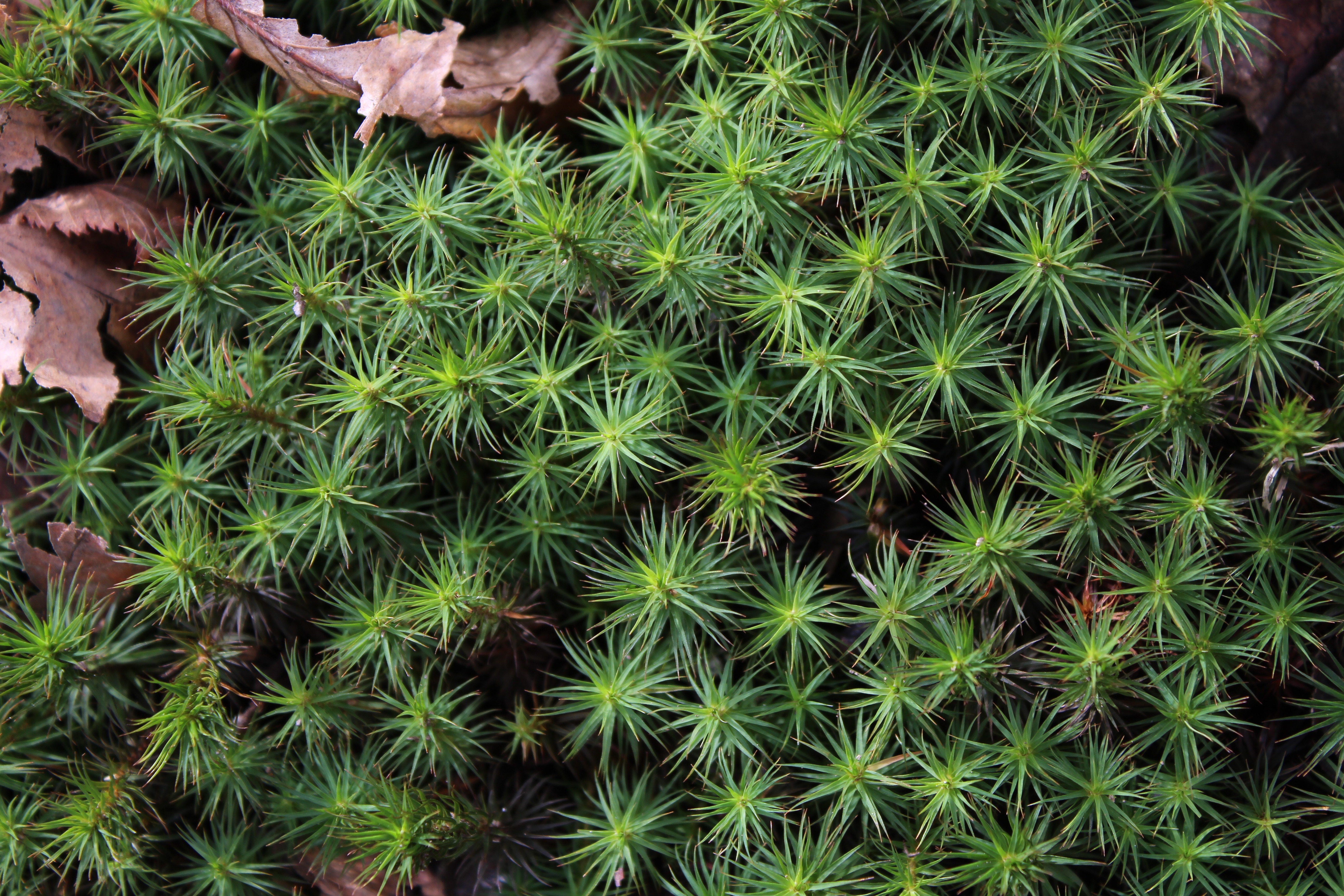 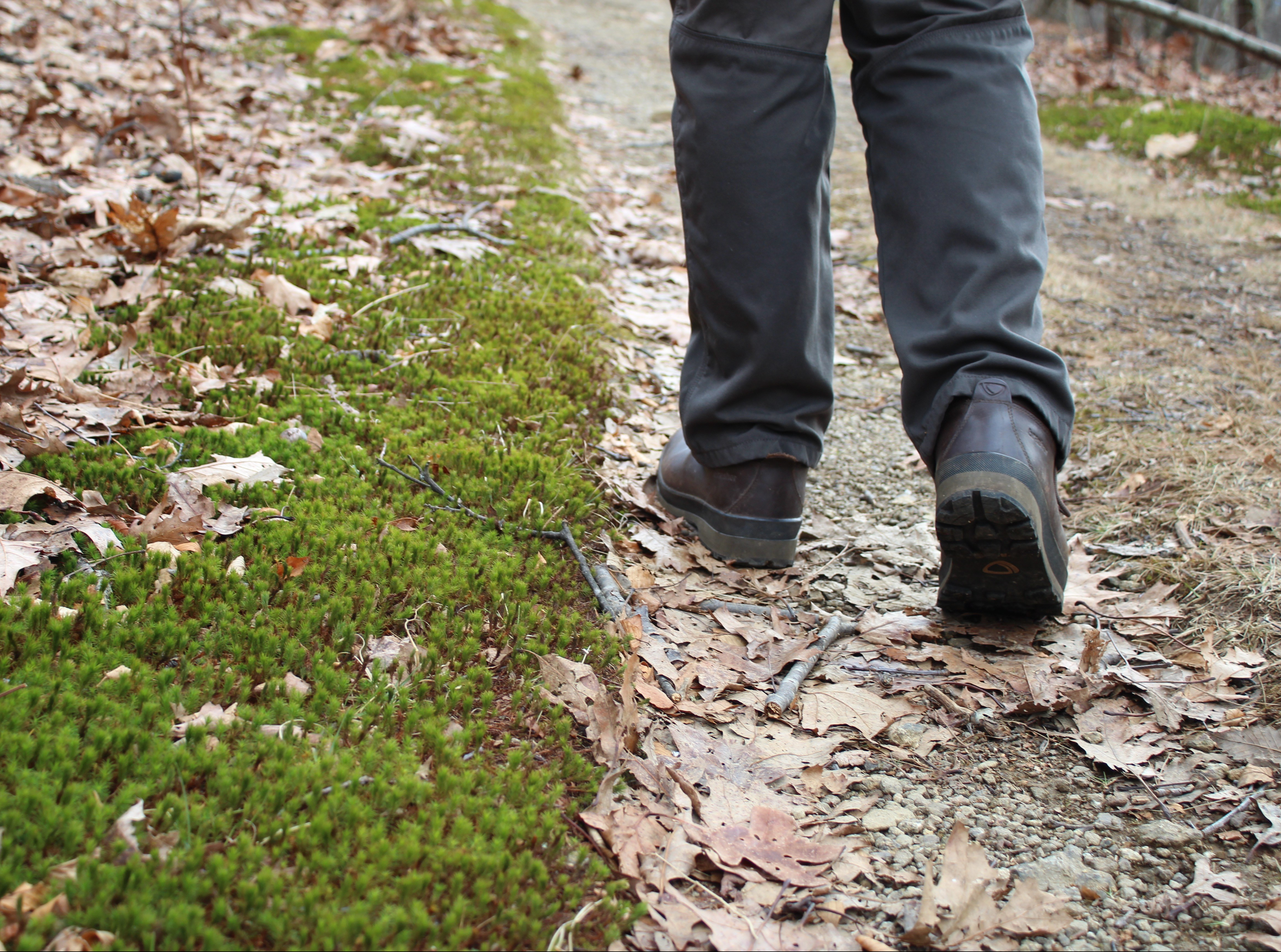 Soon, the trees opened more, allowing us to see the mountains’ curves and we would stop each time to take in the beauty of a distant frosted forest. 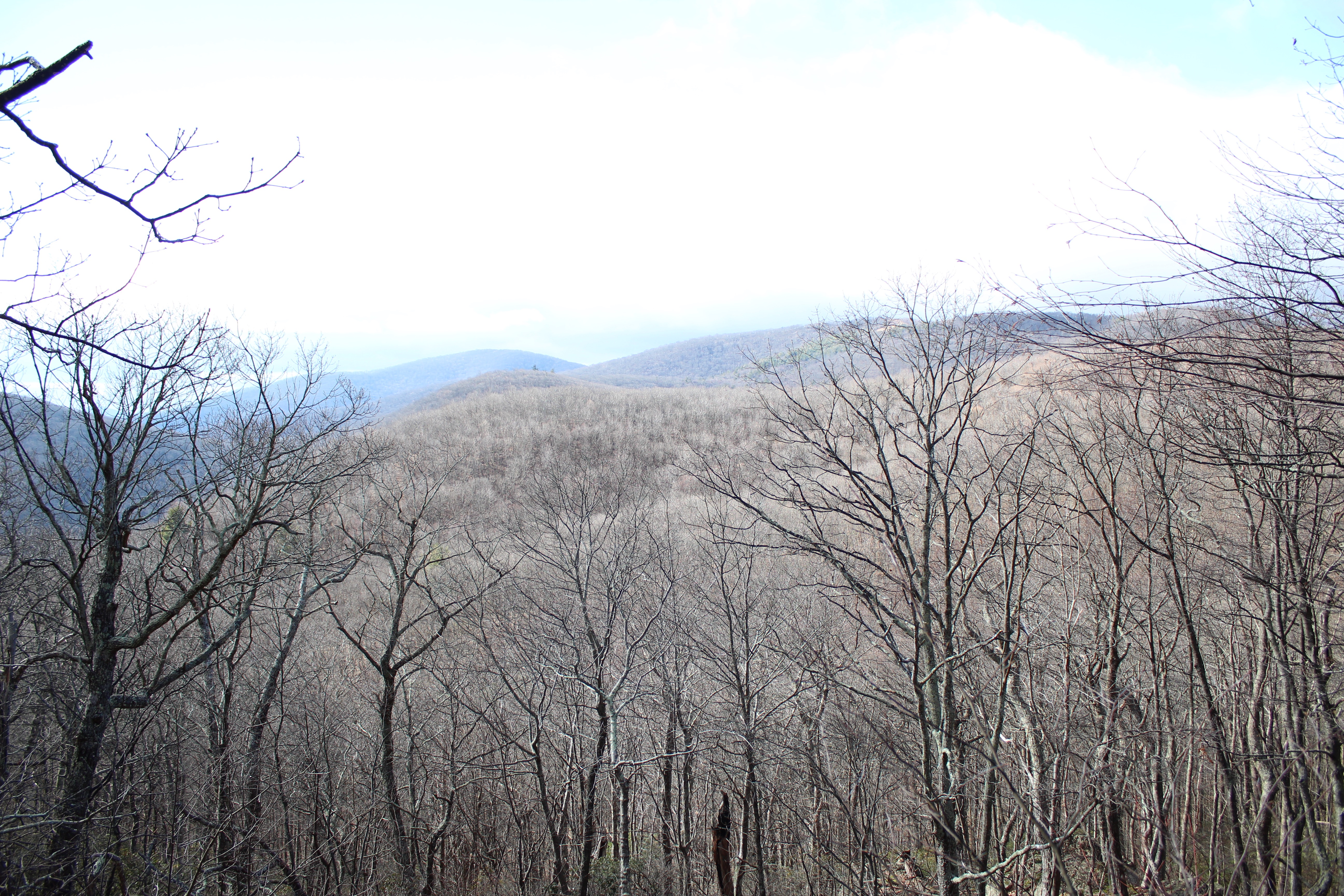 And there was much beauty to see — What little color exists pops in the winter, bright and proud, it glows against brown. 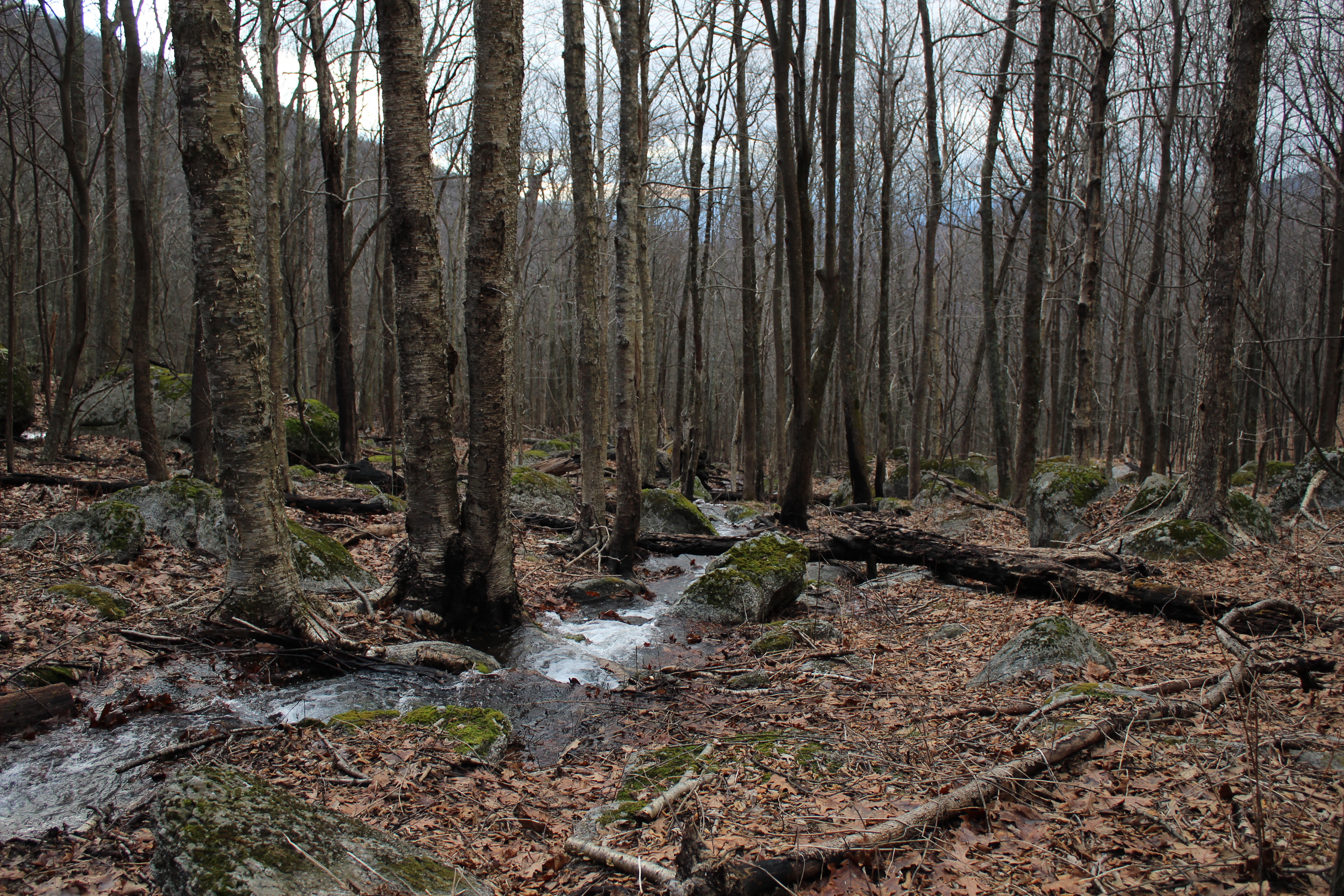 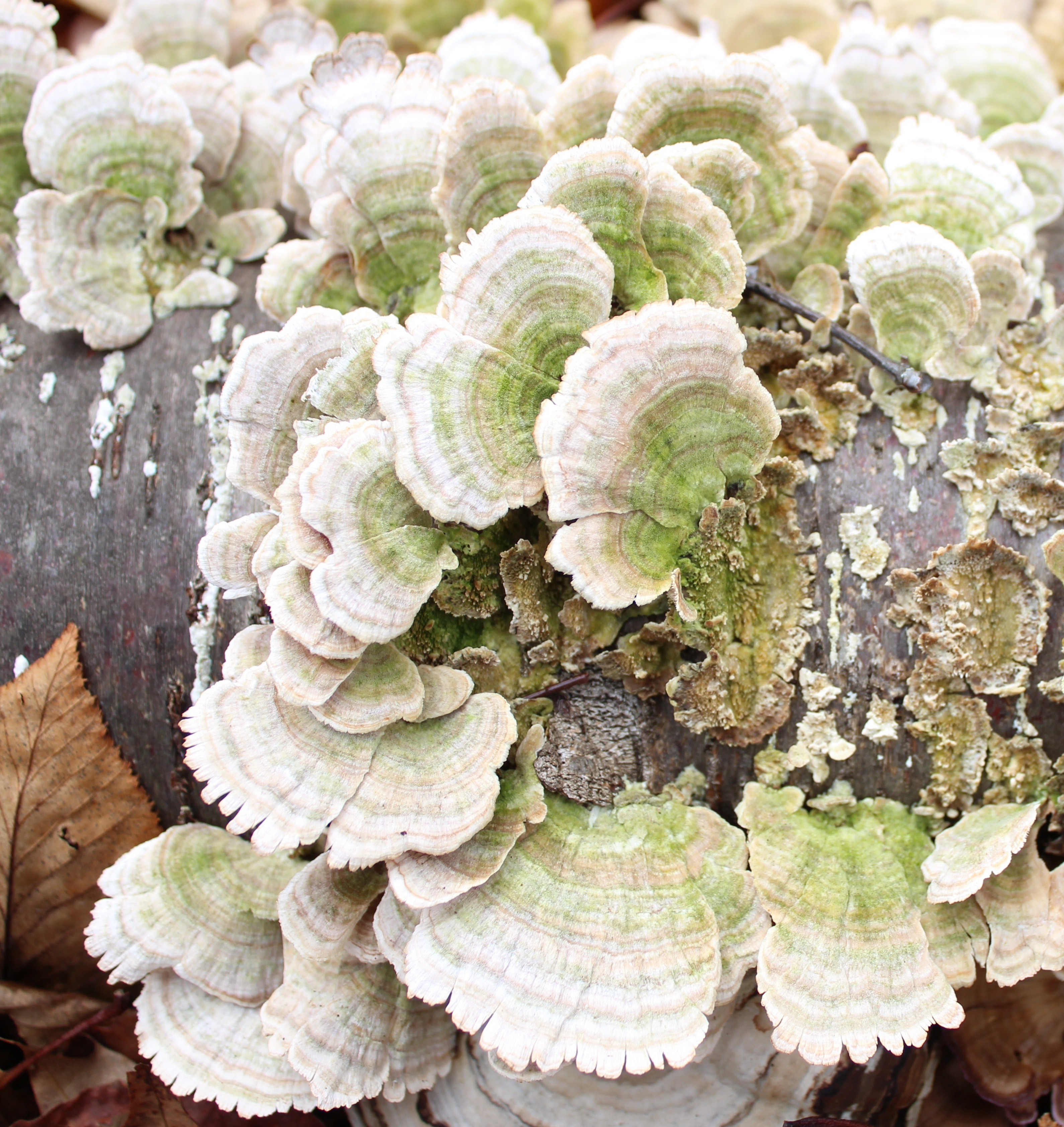 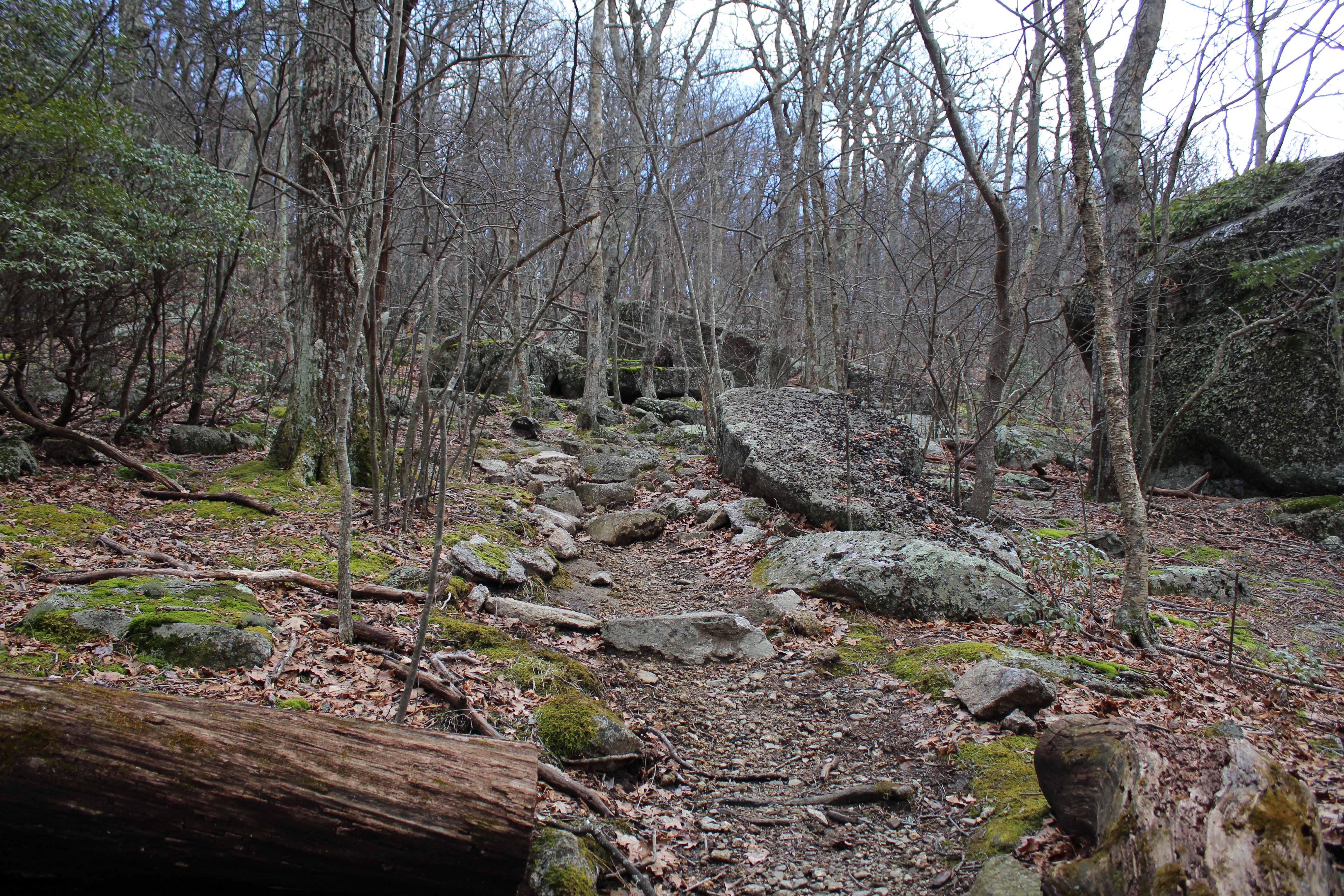 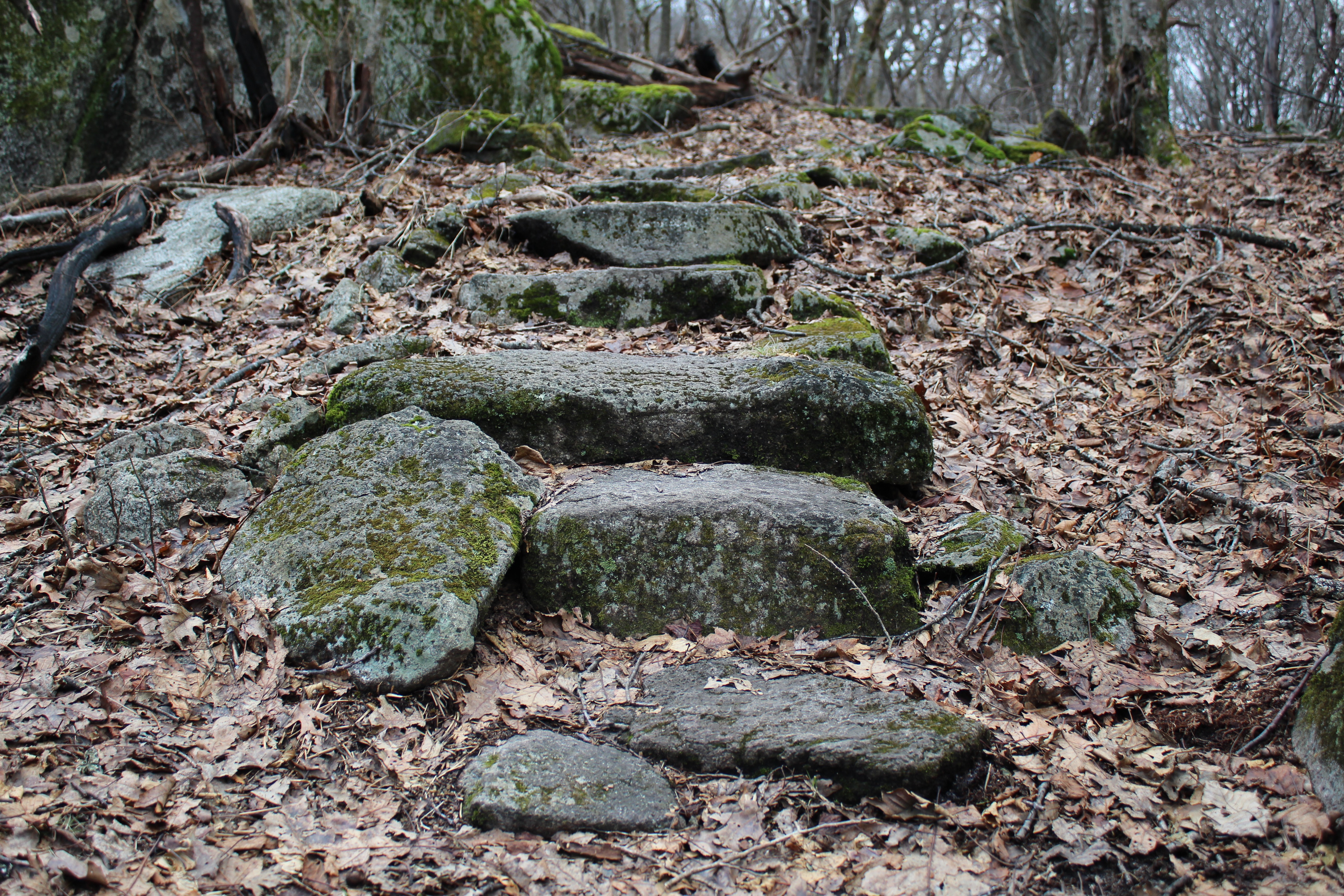 The trail began to twist like the trees’ gnarled limbs above, and hoar frost crunched under our weight.  Soon, our trail gave way to a thin layer of ice, which cracked with each step, making me feel careless, breaking nature’s delicate glass. 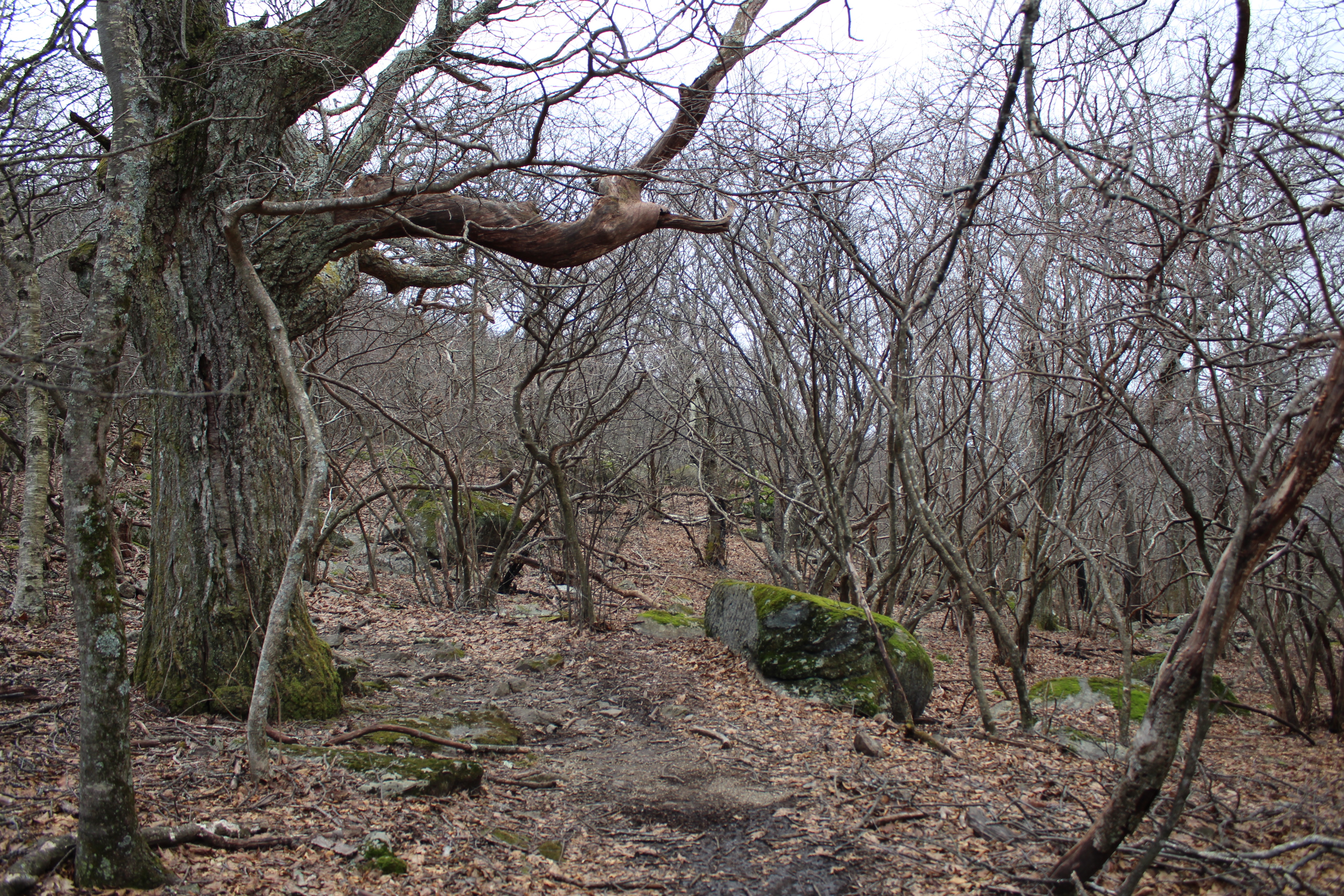 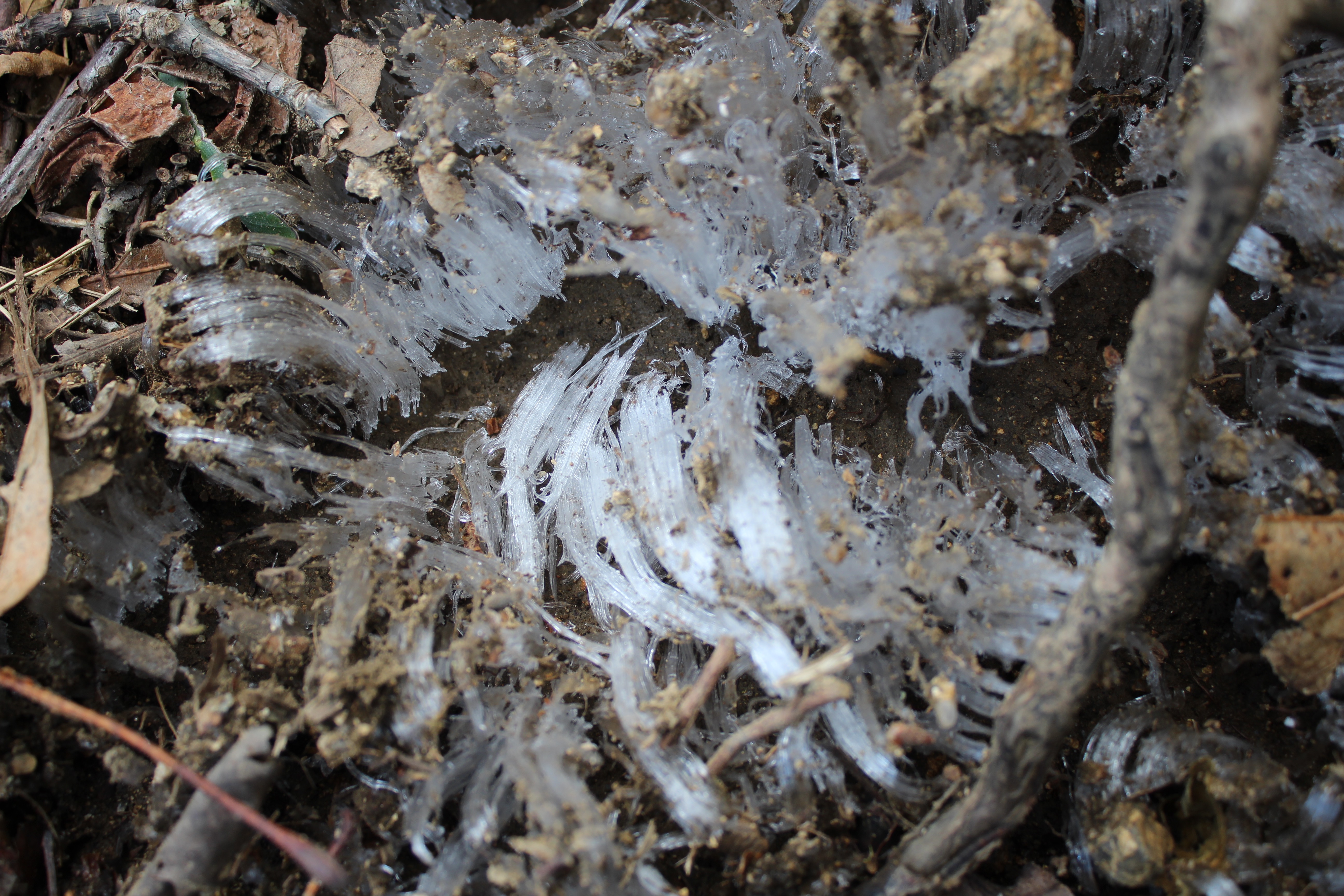 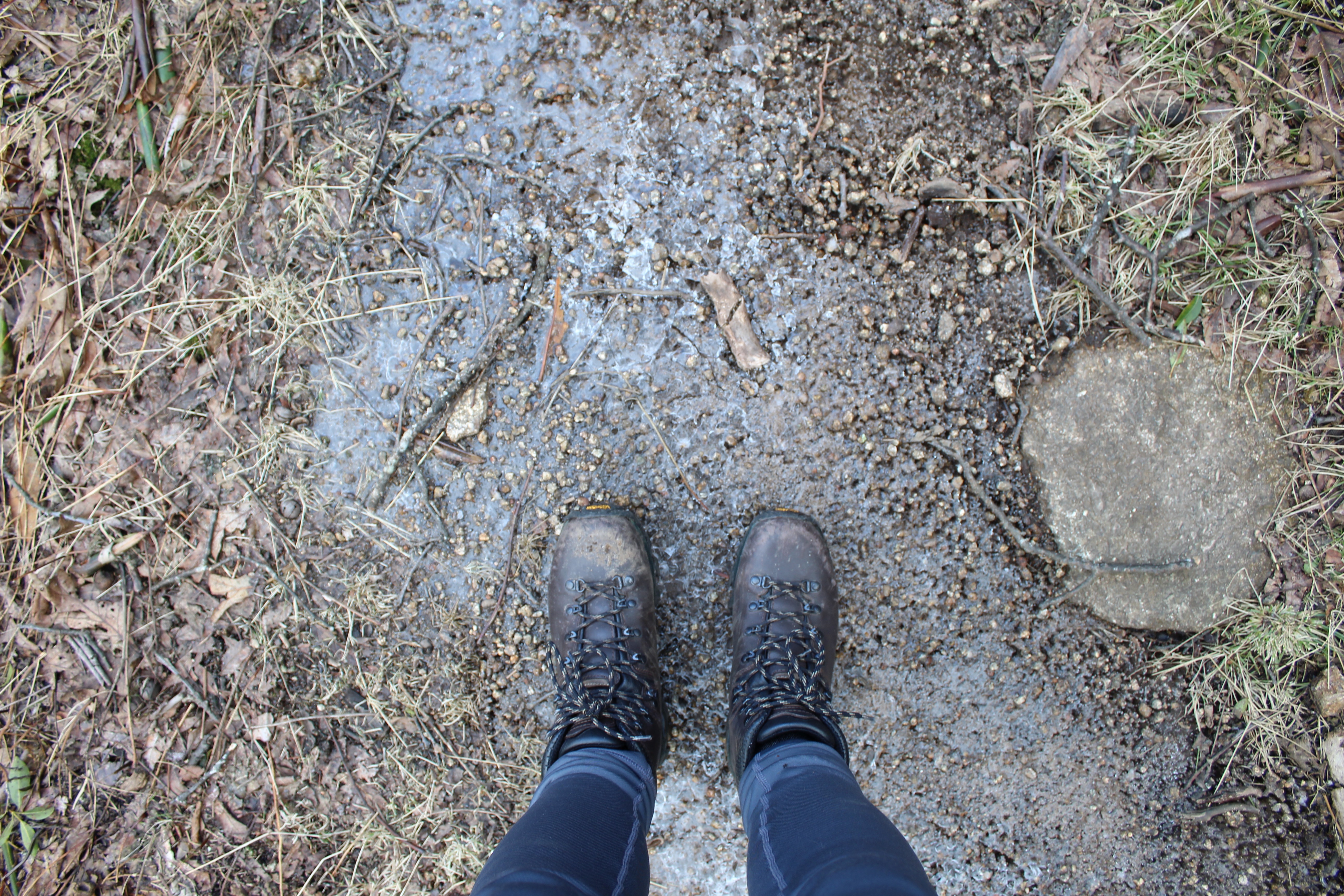 But we had to keep going.  There was no time to stop in a place like this where my fingers were stiff with the coldness and my nose, numb.  So up the mountain we climbed higher into the blue sky. 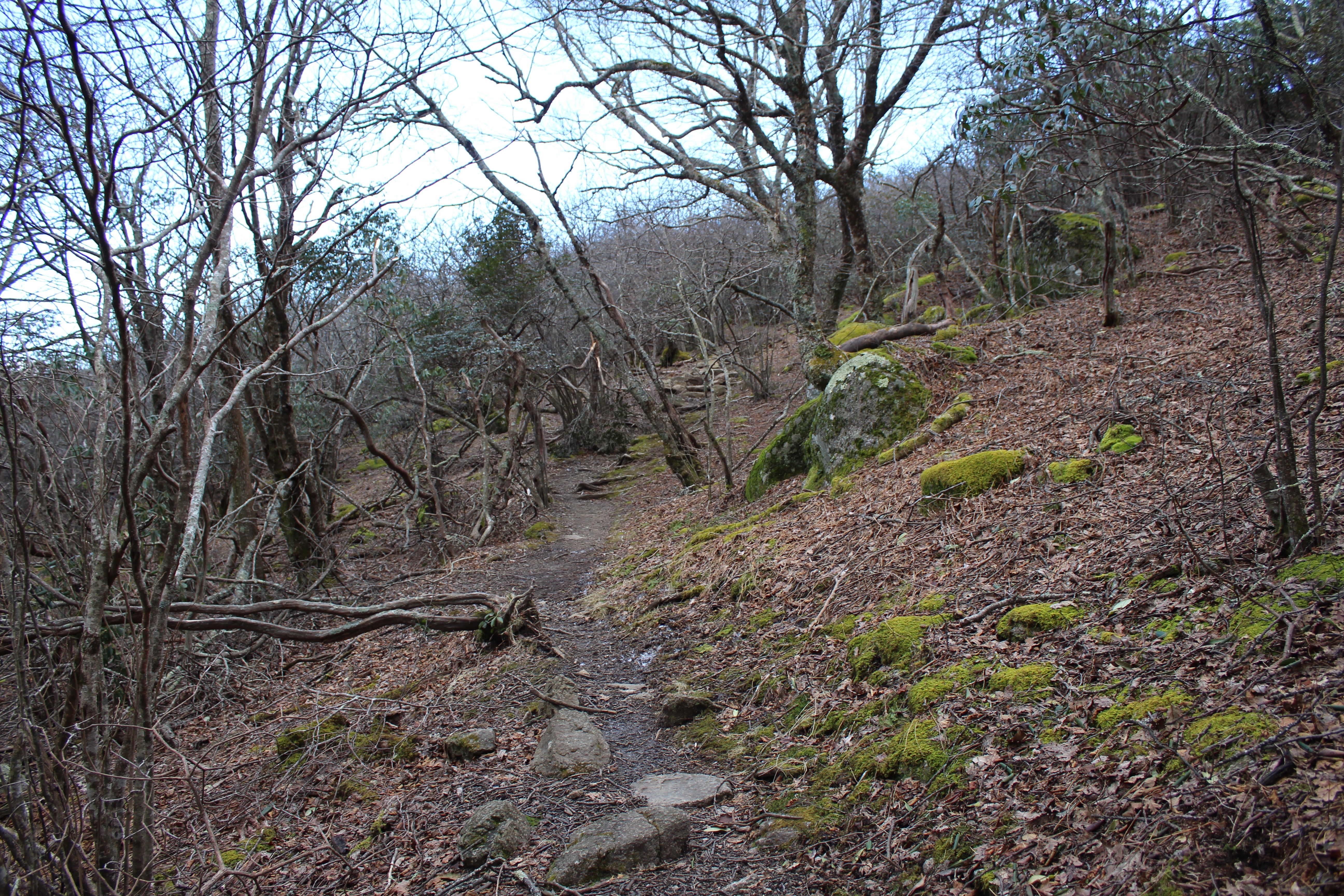 This is the steepest part of the trail, which only lasts one mile.  At the top is a saddle between two peaks: the northeast and the west where both render amazing views.

First we headed towards Pompey Mountain, the northeast summit, where a rock outcrop awaited.  Here, it felt a mighty battle between gods for light and darkness.  Deep grey clouds suffocated the sun and loomed over the blue valley while the sun struggled to pierce through in broken patches of light.  What felt hundreds of miles away, the sunlight in the horizon glowed — part was so bright that it turned all white, and the other half displayed faint pinks and yellows to appear more as a sunset. 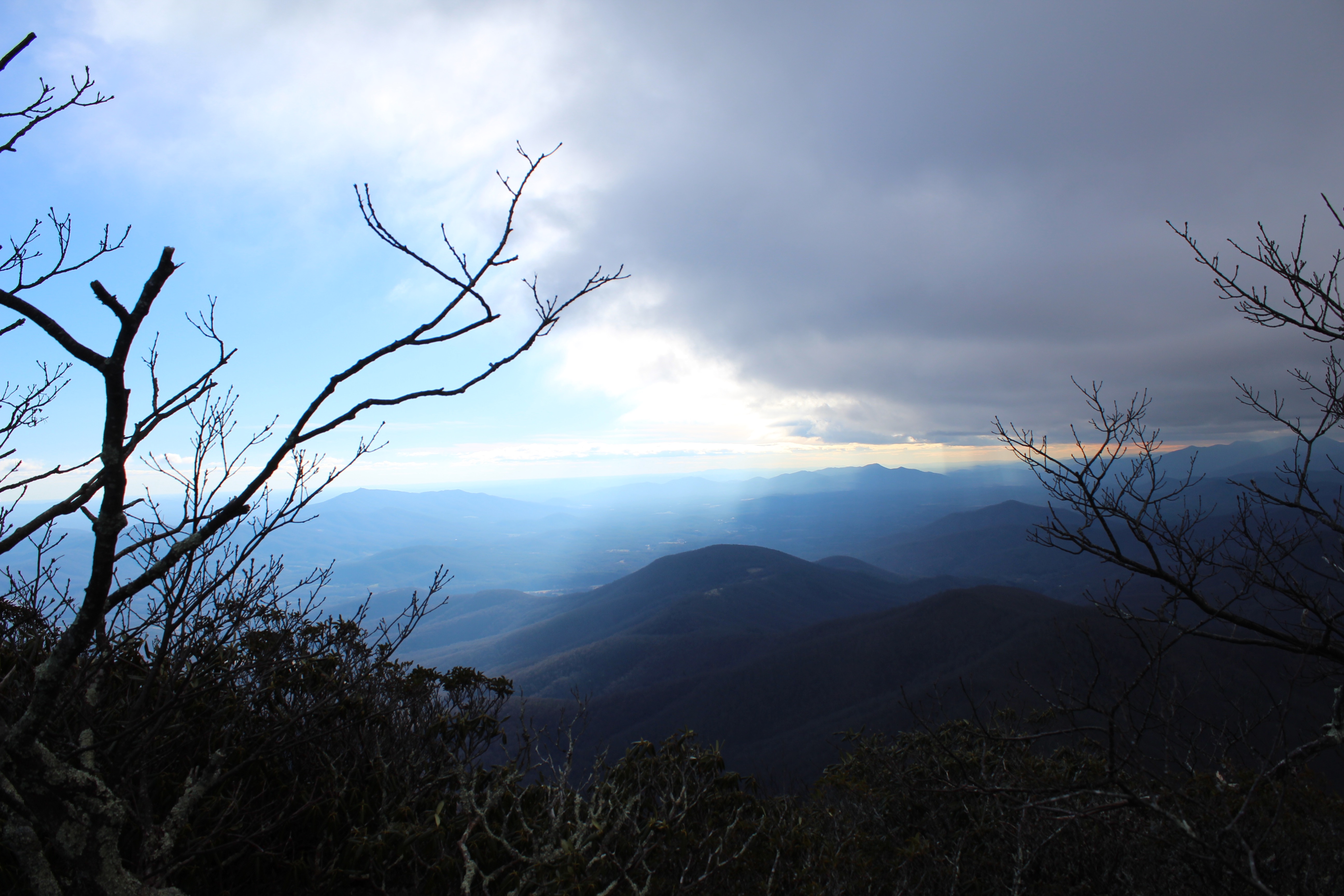 The shadows and light tested my photography skills by making it near impossible to get a balanced picture. 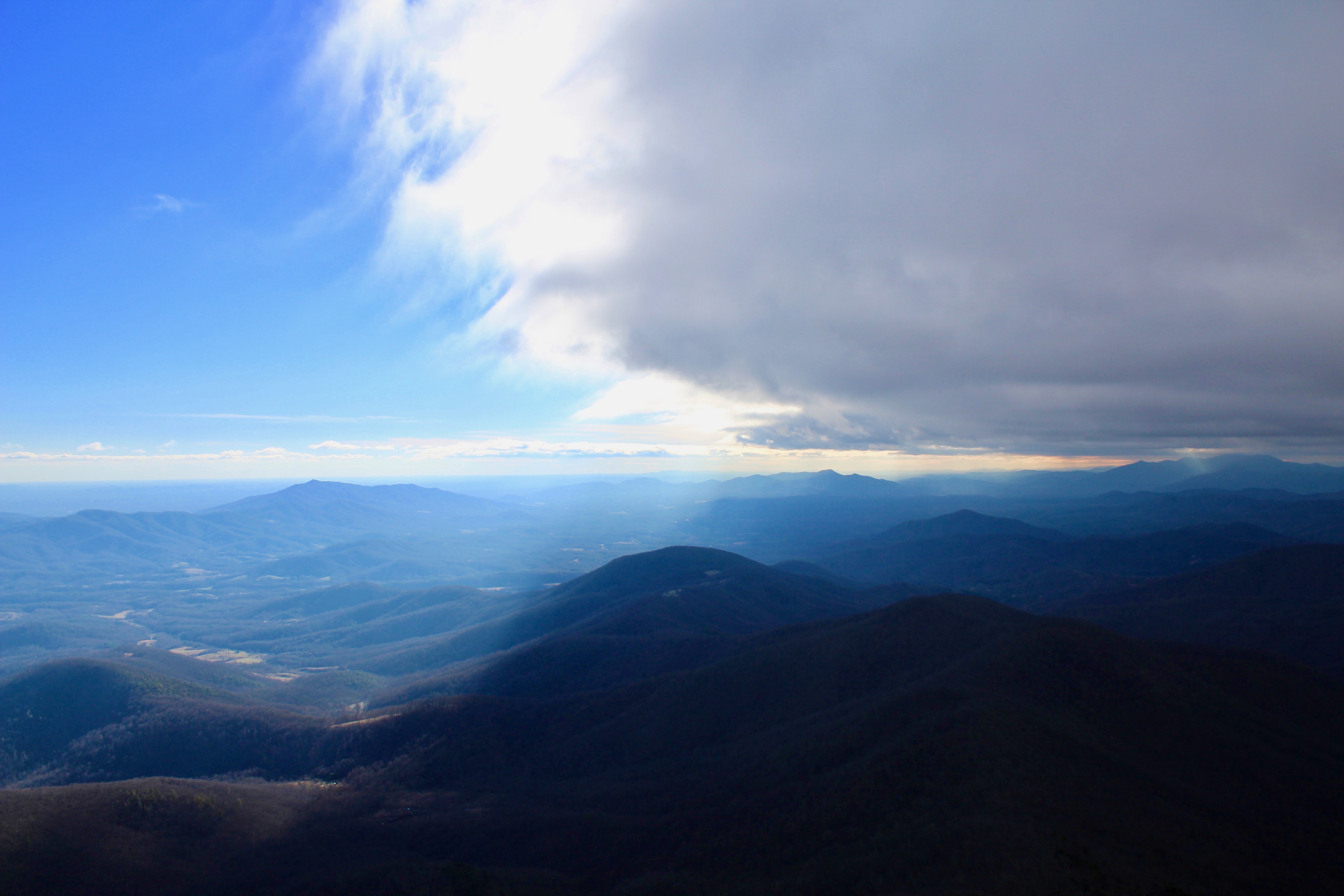 At the top, the summit opened around us with a view from all sides. 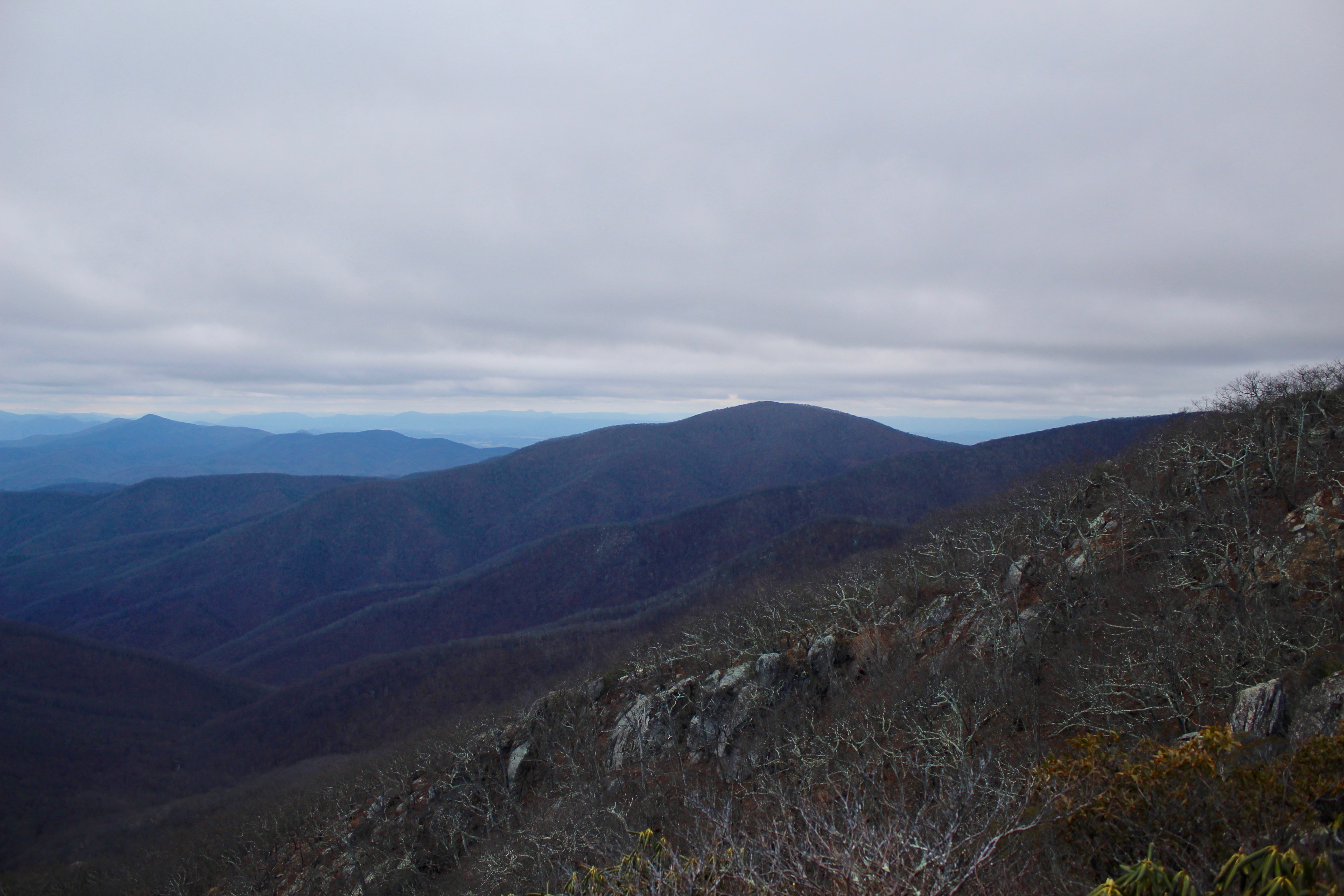 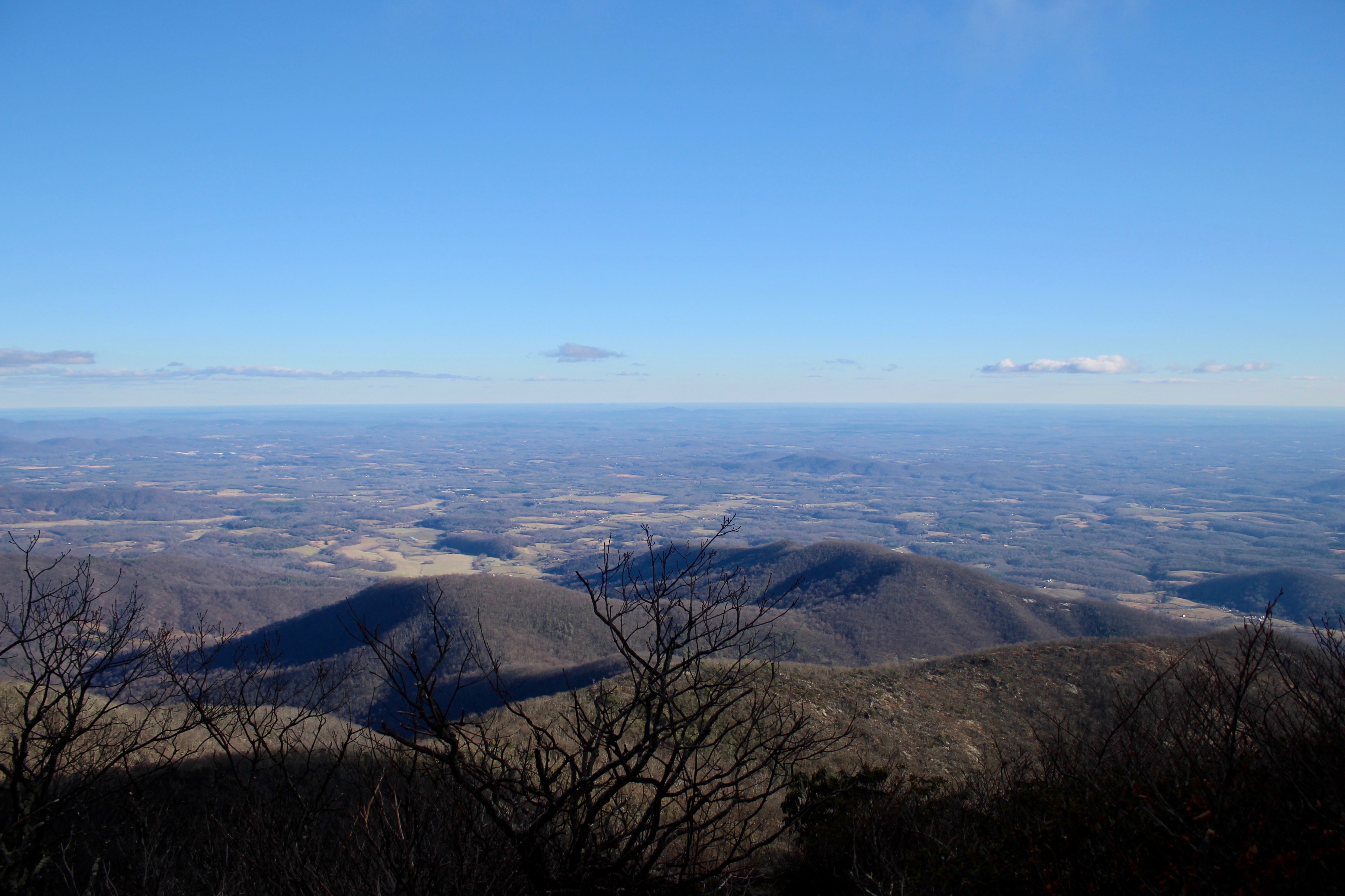 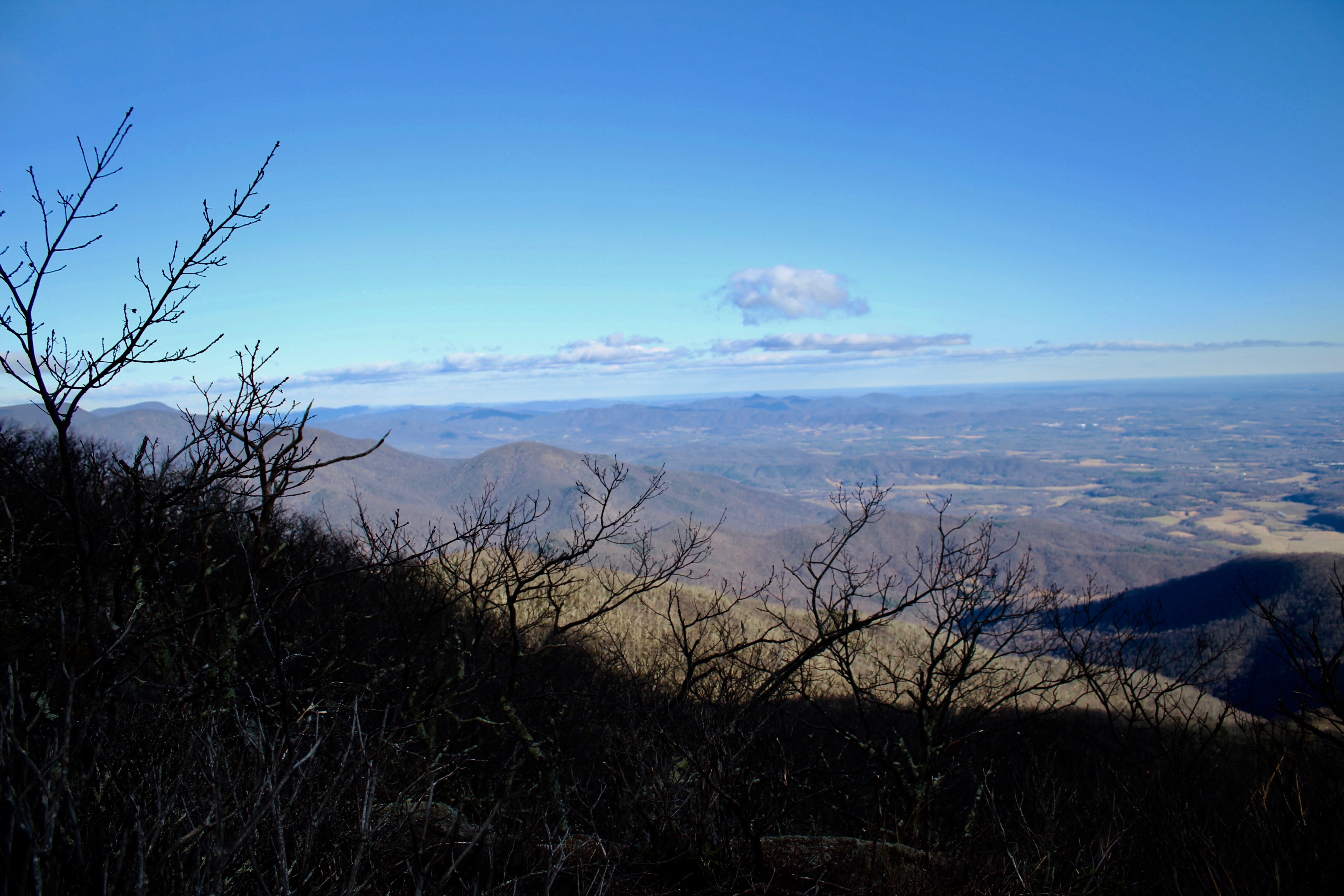 Even the trees appeared beautiful — They looked fragile but stood defensive against the wind and cold, giant soldiers protecting their even larger mountain. 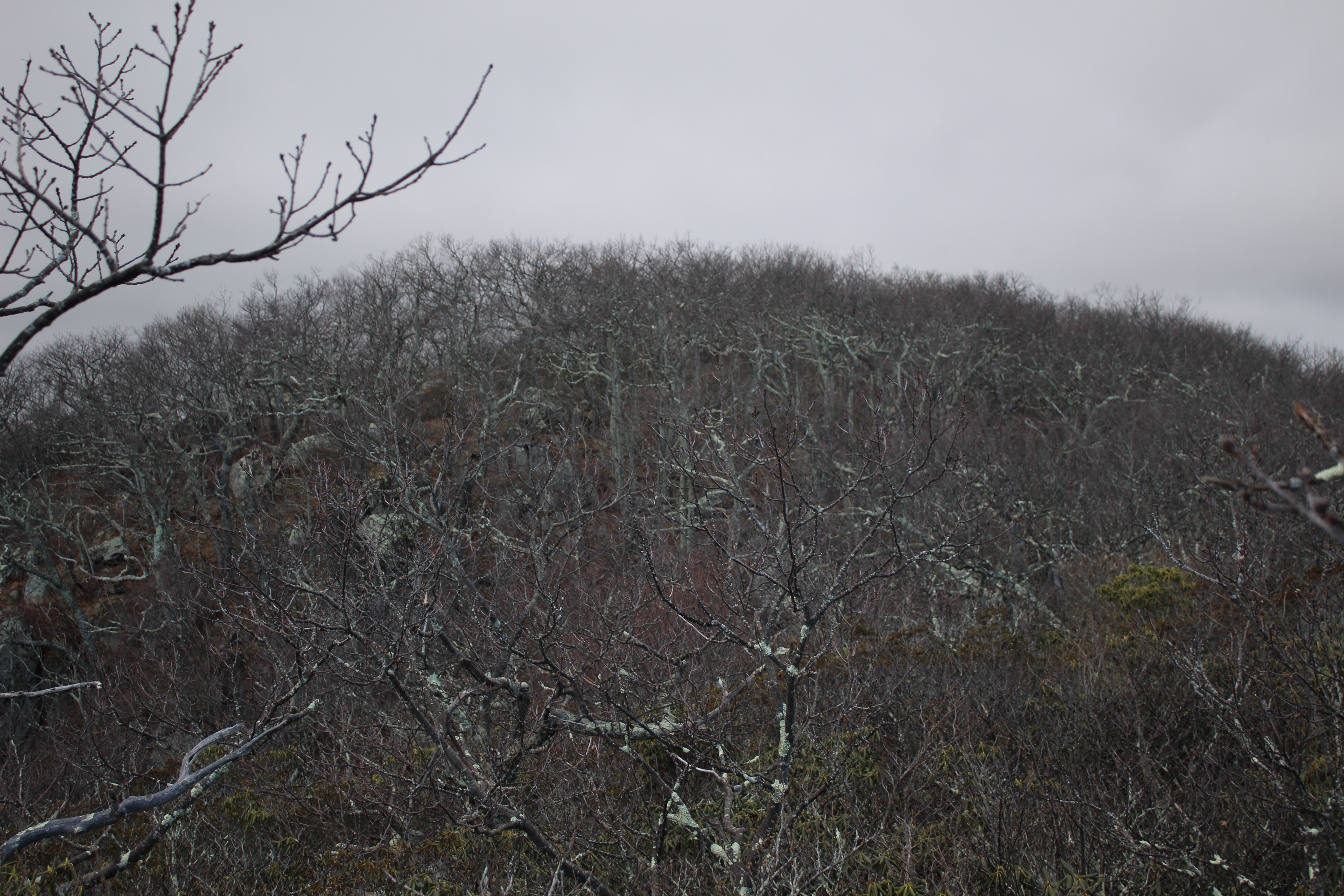 Andrew and I stayed at the top until the cloud seemed to grow a slightly lighter grey then it was time to explore the westerly summit. 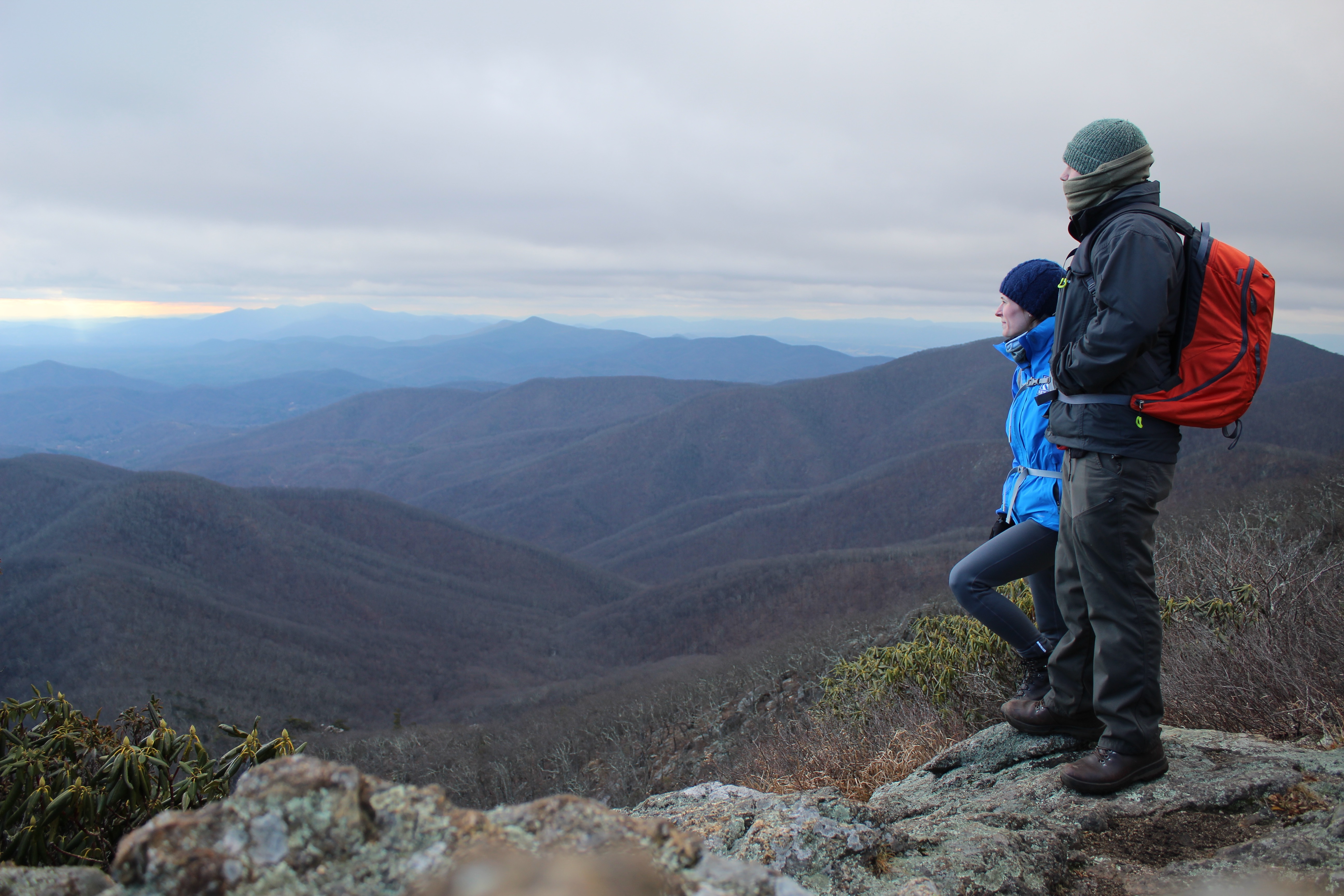 Here, we had to rock scramble up a scree on the slope of the mountain before being welcomed to the views. 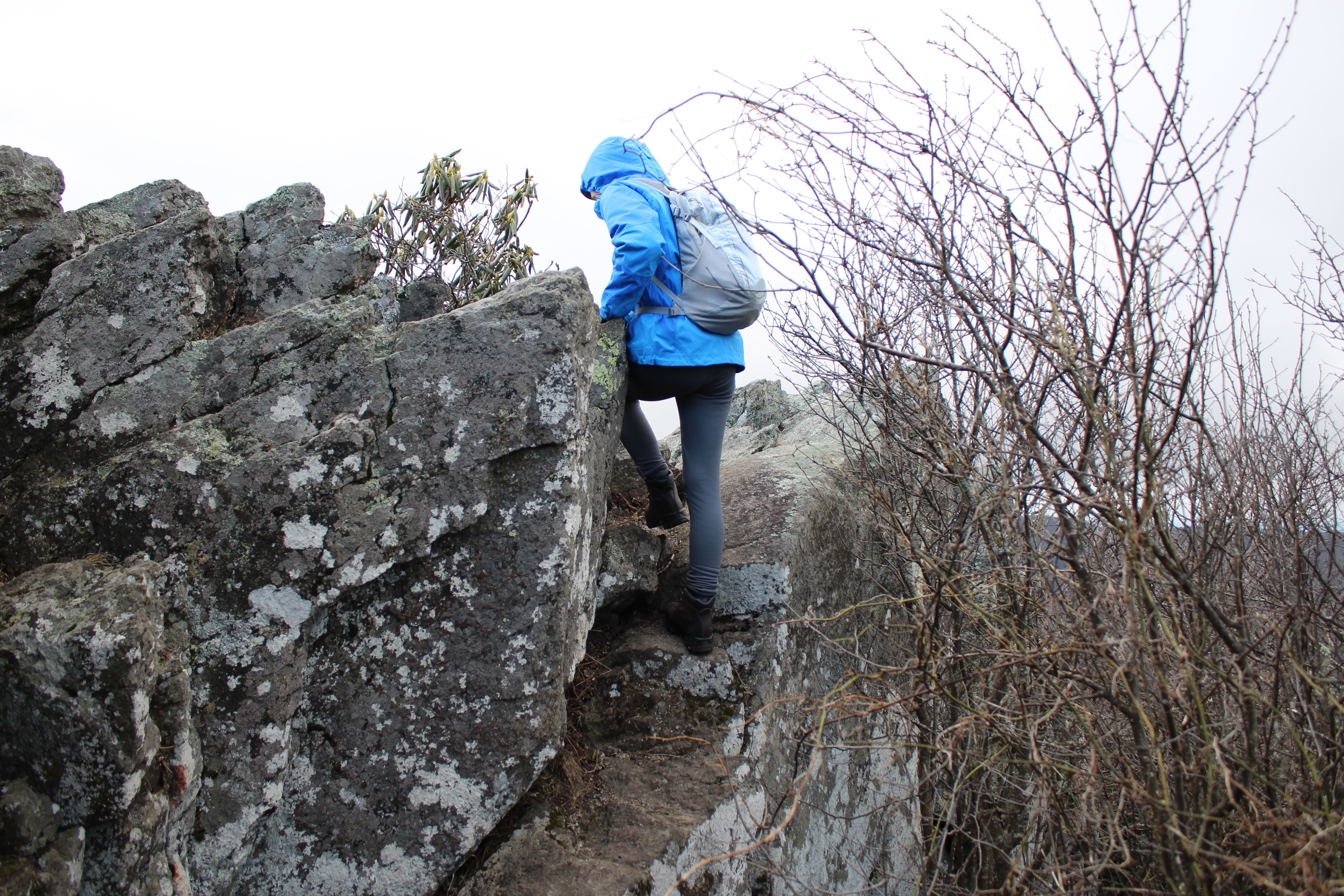 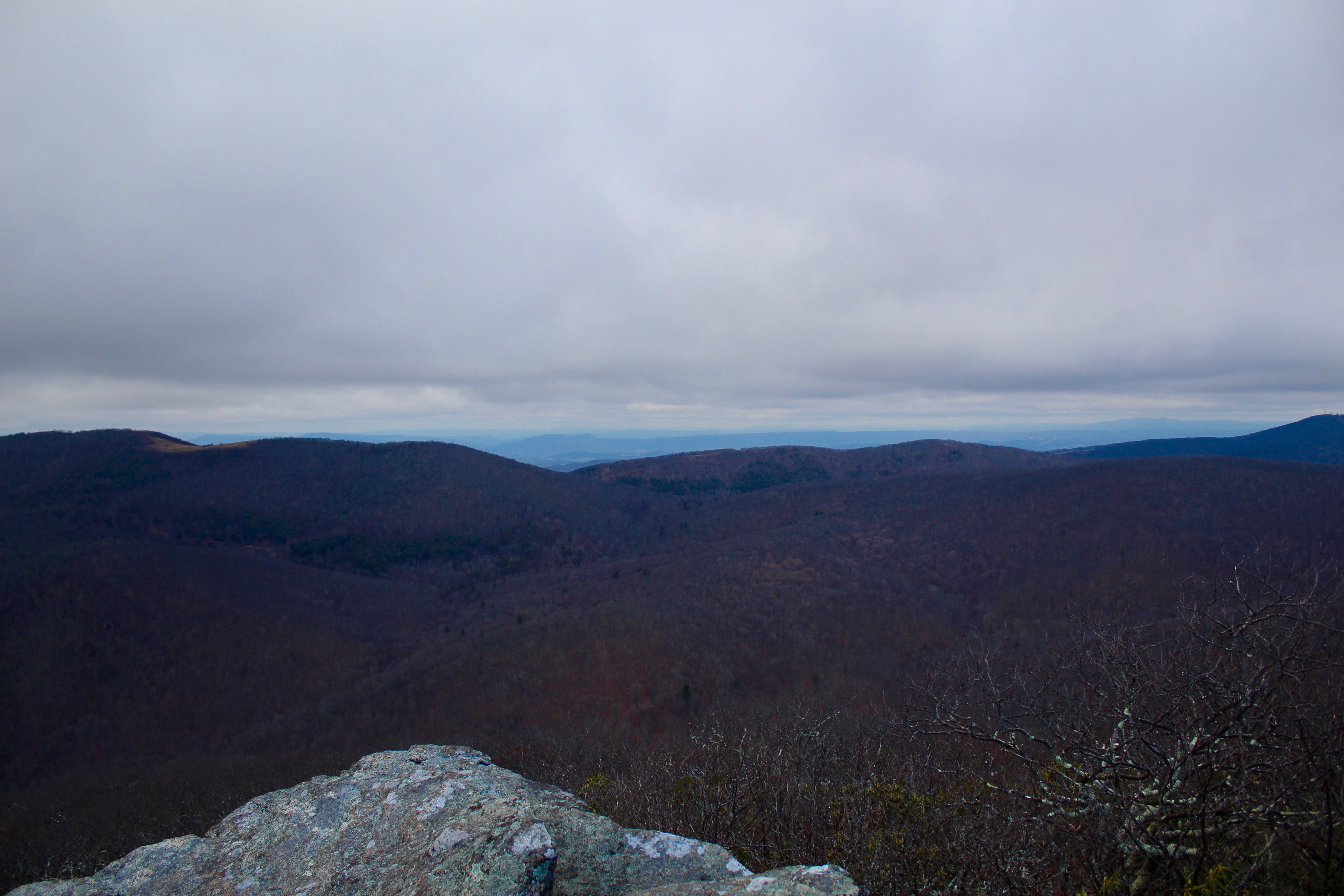 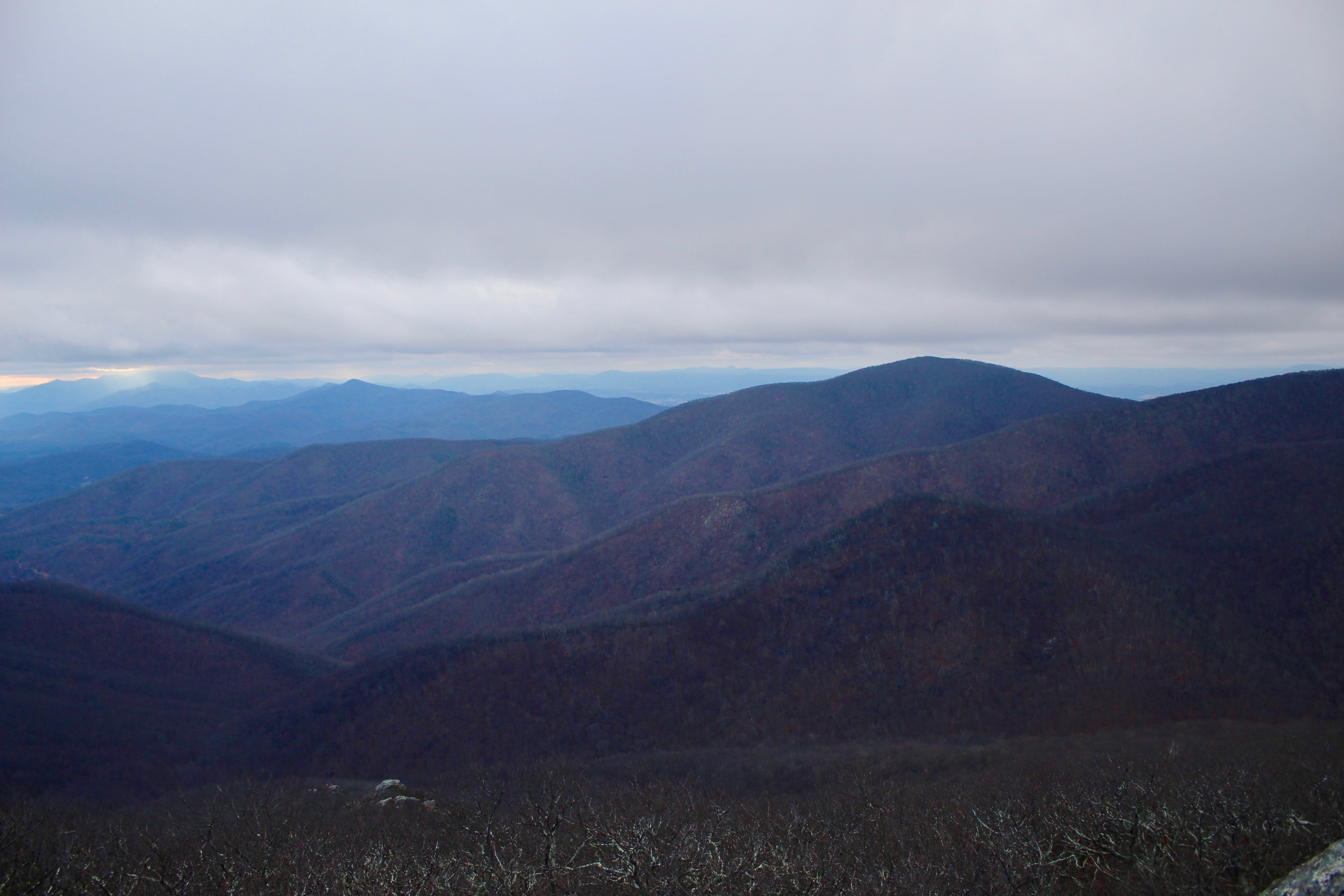 At the top, the wind threw itself around the mountain in sharp, icy bursts and we sunk into the warmth of our jackets.  But even the gales were not enough to keep us away. 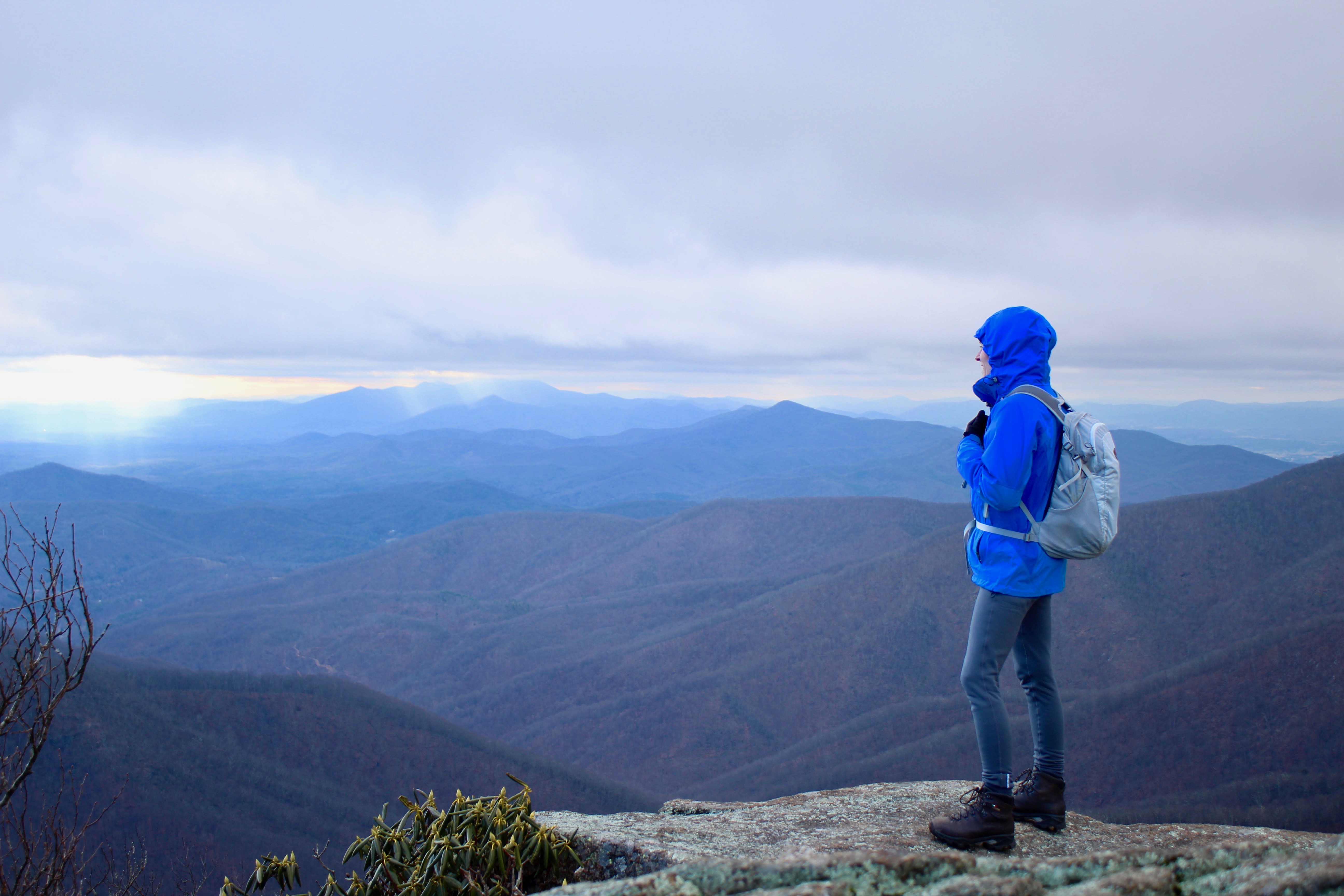 In the end, we stayed for many minutes, hoping to see a sunset but the clouds barely rendered and never broke enough to catch one.  Still, there is something romantic, innocent about sitting at the tip of a mountain with your love and looking down into towns and cities, imagining all of the people there living their lives, all of the troubles and worries below but you — you are above it all and in this moment, calm. 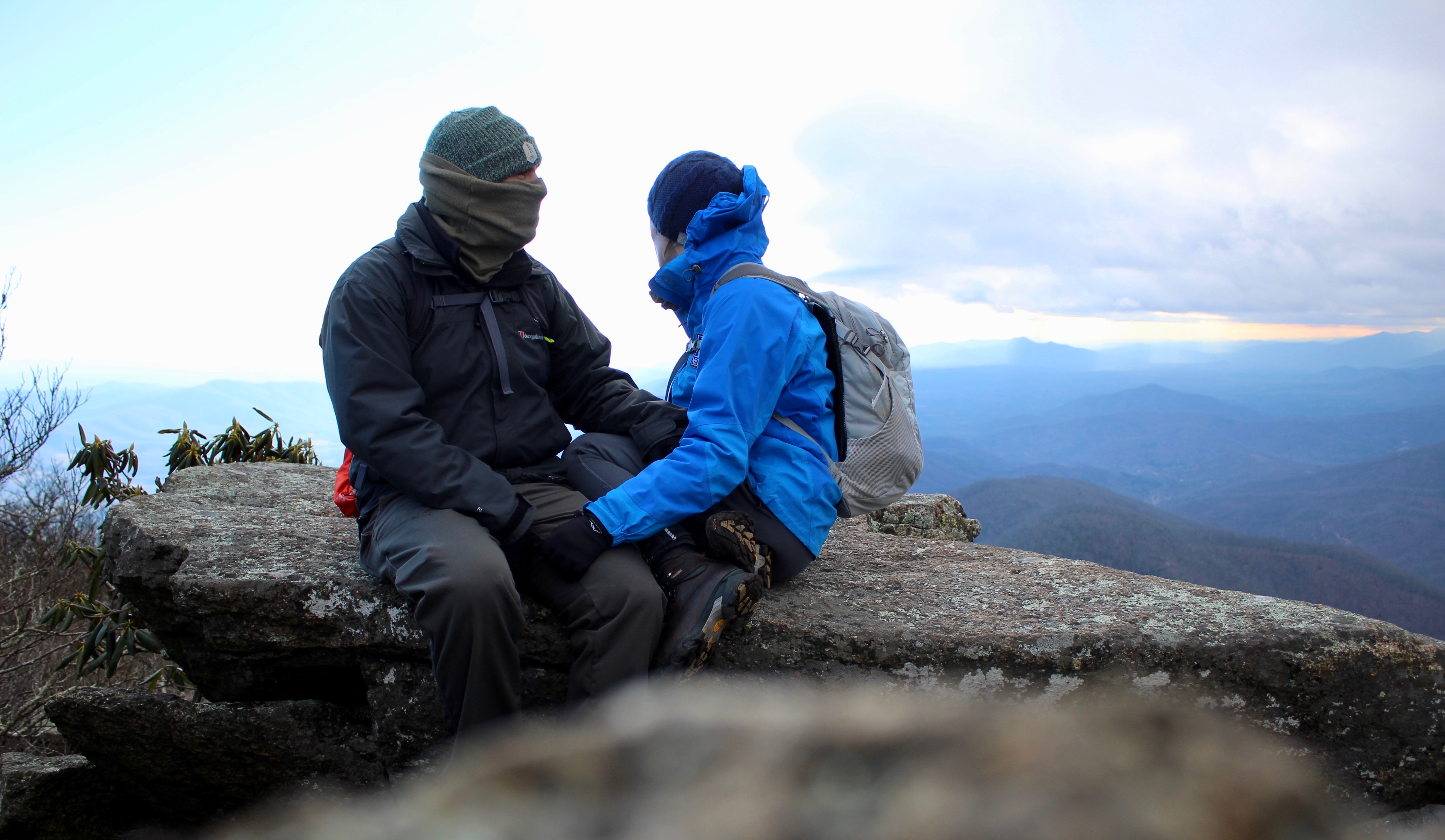 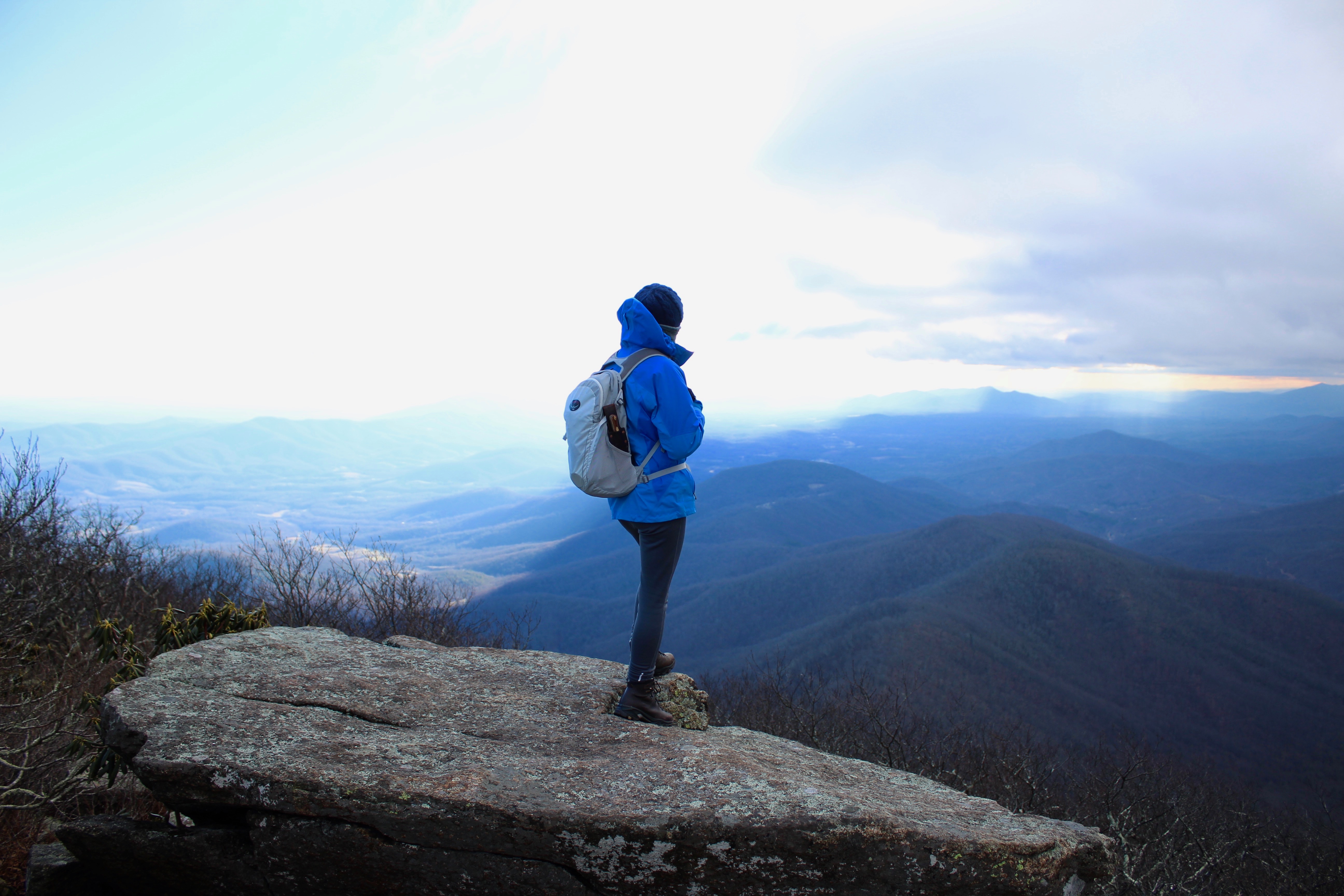 Mount Pleasant lived up the hype, and is undoubtedly one of the summits that give George Washington Forest a top name.  On the way out, we saw a family of deer that bounded away from us and into the trees. 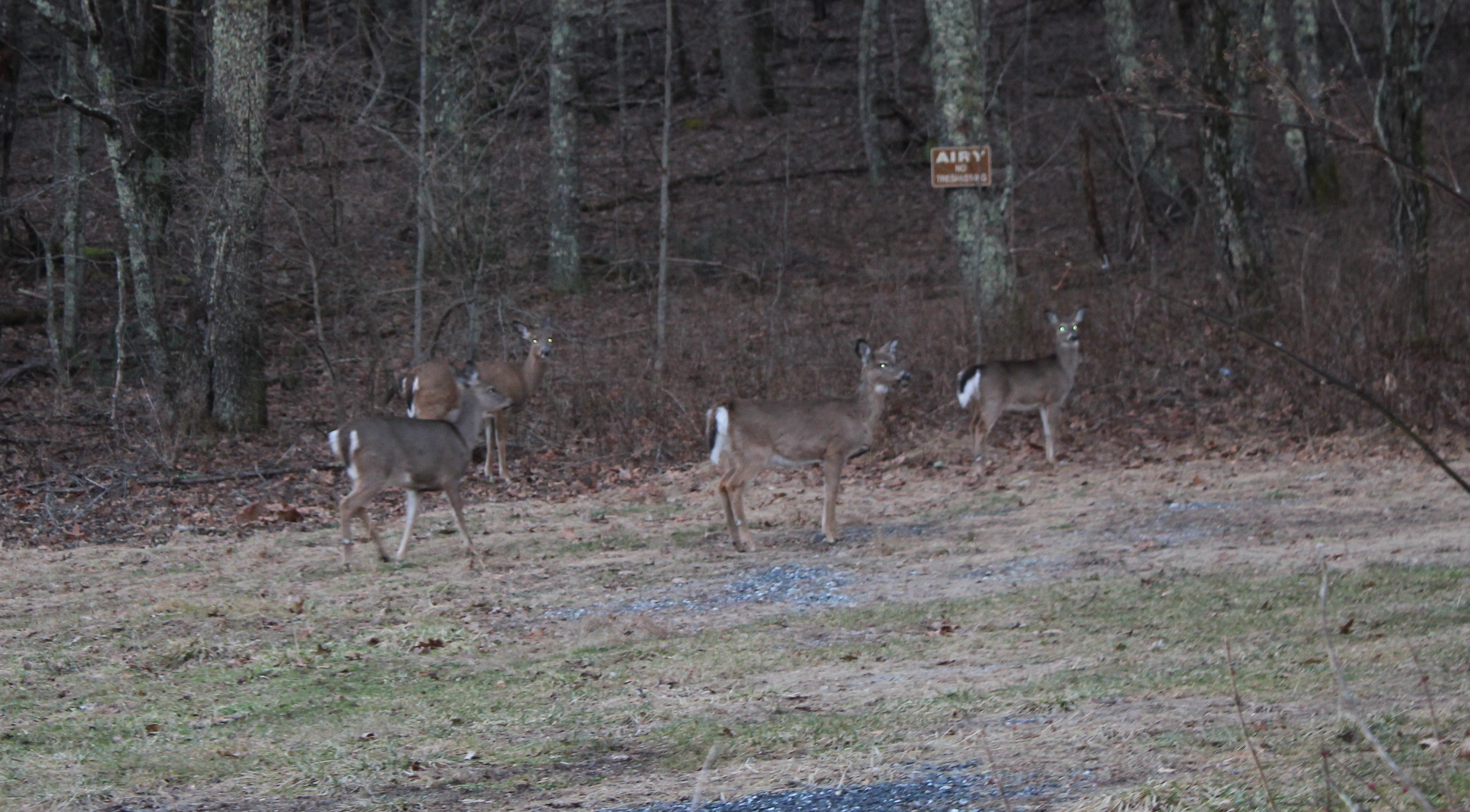 Then, as if we needed more of a reward, we got this beautiful sunset burning behind the silhouettes of black trees. 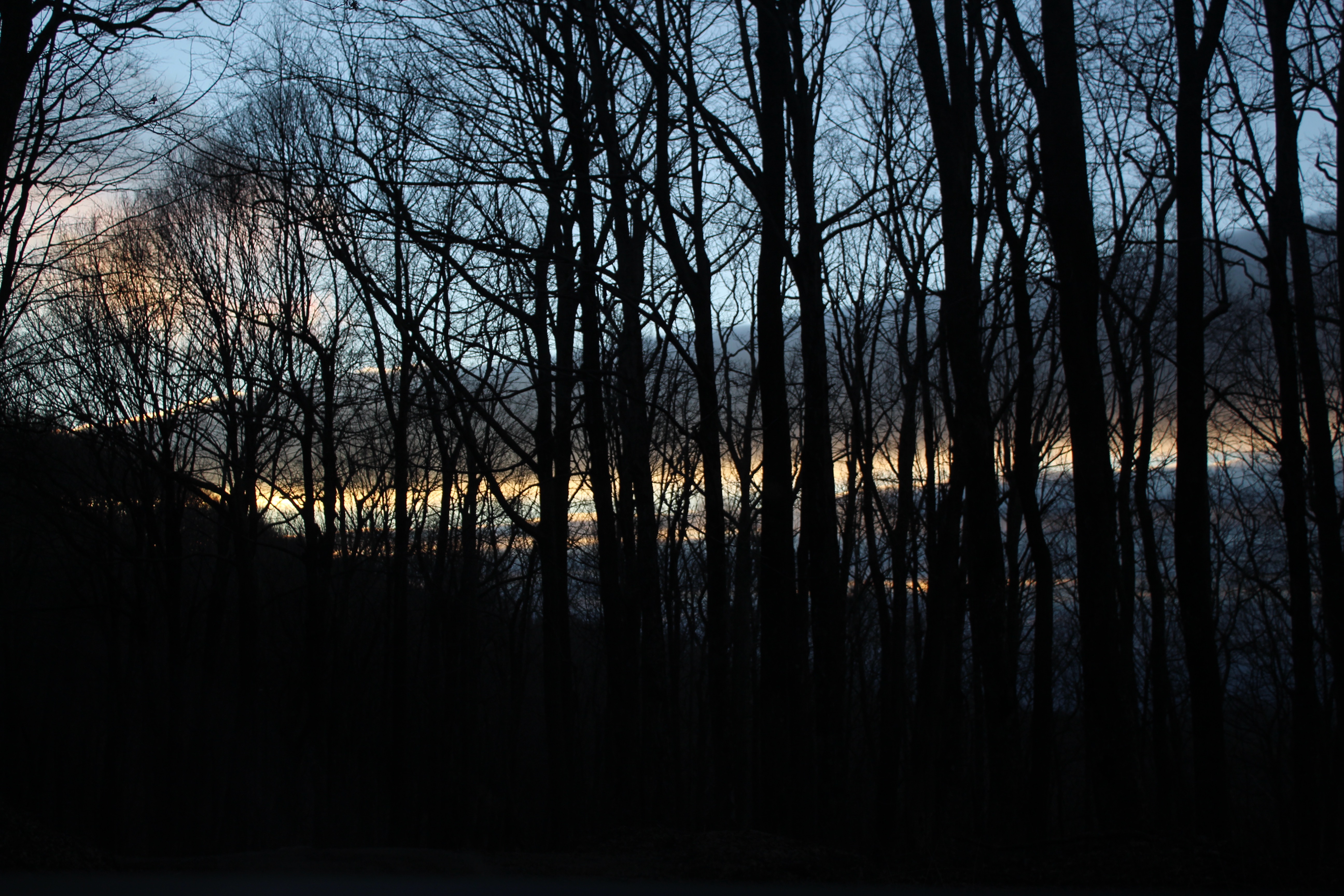 And by the time we reached the car, the moon had transformed into the sun — a gigantic fierce ball of orange fire — that at first cowered under telephone poles and peeked above the trees.  There, it swelled further, as if gaining even more force before it slipped into the sky to hover above.  Beyond this burning moon, the night was starless and so dark. 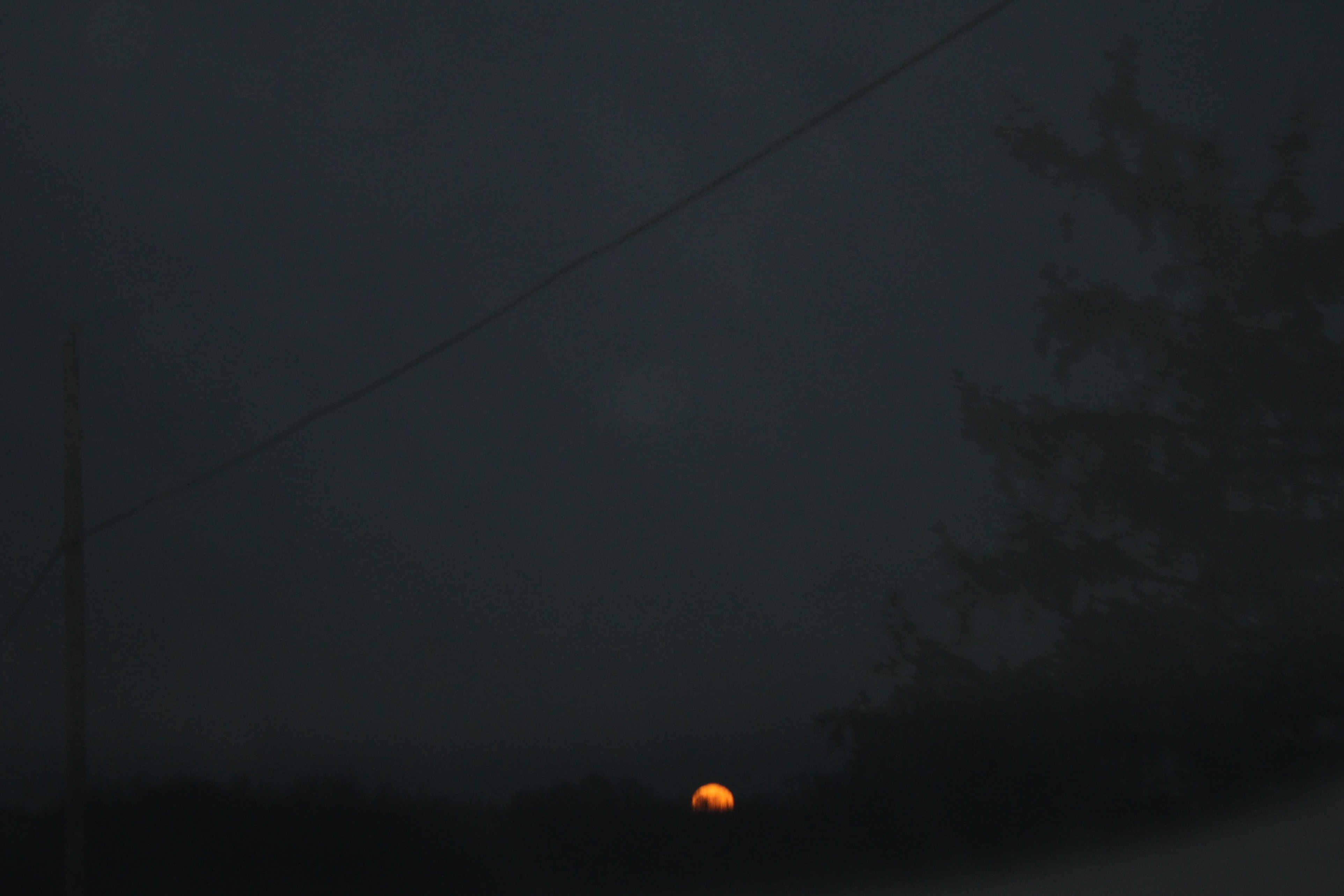 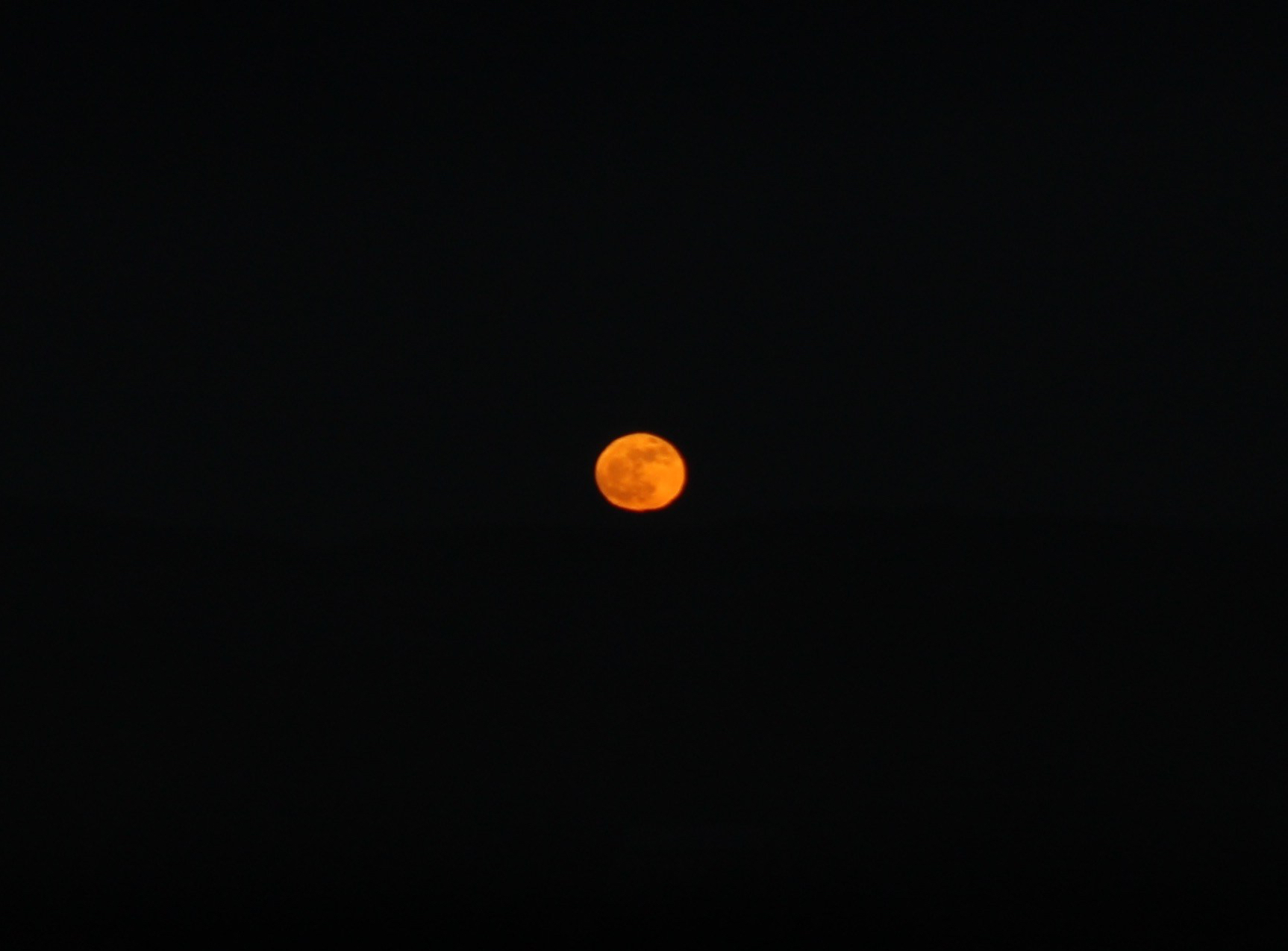 I wanted to say, “I see you, Nature” because I did.  In a place that appeared dead in the winter, all was very much alive and I inhaled deeply feeling the magic fill my lungs.