Recently, I had to come to decision on switching to a new multiple sclerosis medication.  Because of the progression of my disease, Medication Number Three needed to be stronger than ones I’ve taken in the past (such as the self-administered injections and oral pills).  This meant an infusion was necessary.  For that, Medication Number Three was determined to be Ocrevus — a prescription medicine for adults with relapsing forms of multiple sclerosis.  (This, and more on my decision, can be found in my last post.)

To be sure Ocrevus was a good fit, I needed to have strange blood tests done — such as lab work to determine if I had the Hepatitis B viral infection; plainly put, if I did have Hep B, I could not take this medicine.  Happily and as expected, my results showed I was negative so it was on to the next stage of planning, which dealt with preparing my body for Ocrevus.  Here I had to stop my current MS medication, Aubagio . . .

I’ve been on Aubagio for two years and liked the ease of having a one-a-day pill (compared to the injections I had to give myself previously with Copaxone).  Andrew and I tried to create a sort of happiness around getting this medicine — When a new pack came, we would write messages inside to one another, messages that would only be discovered the next day when one of us got out my daily pill.  Soon, my medicine became a collection of secret love notes and doodles.

Before I realized it, I had accumulated about twenty-four private drawings and messages, all of which still make me smile or laugh as I can distinctly recall what was happening that month — what we were thinking about, what we had recently gotten into, what was going on in our lives.  My pill packets became a sort of odd scrapbook, but it was time for the next chapter.

In order to take Ocrevus, I not only had to cancel my Aubagio orders but I needed to remove that medicine from my system.  According to the Aubagio’s website, this medication can stay in the body for up to two years after taking it.  Even though it sounds hard feat to remove relatively quickly, my neurologist assured me this is not the case.  For this job, he prescribed what’s nicknamed a ‘wash-out’ medication. 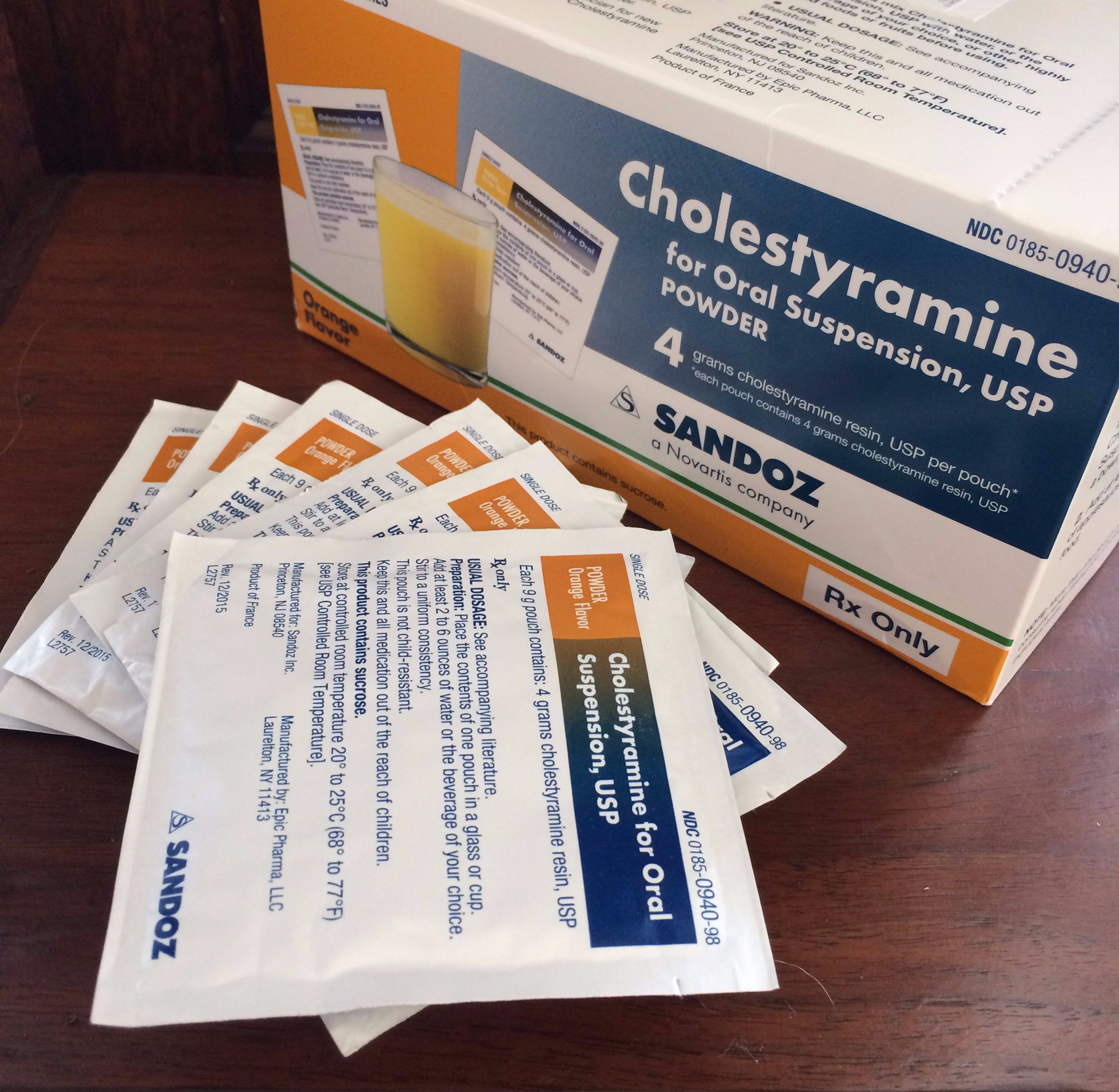 Cholestyramine is a powder that is mixed in water for a drink or in applesauce as food, and somehow it finds a mystical, magical way to bind to past meds circulating in the body.  I say ‘mystical, magical way’ because even doctors are not sure precisely how it works but the end result is medicine, like my Aubagio, is eliminated — well, though the natural way humans remove anything taken in from their bodies.

This seemed a bit nerve-racking though — All along my neurologist had stressed the need to get on multiple sclerosis medicine as soon as possible and to stay on it to reduce the risk of progression and slow the disease; however, now our goal was to wash it out and wait over two weeks for my next and new medication.  Because of this, I had questions: What if I had an MS attack during this wash-out phase?  He assured me I could have steroid treatments to combat this.  Would there be additional side-effects of the ‘wash-out’ medicine?  He was only aware of minor side-effects.

So it was bottoms up.  I had to take Cholestryramine three times a day at eight-hour increments over the course of a little less than two weeks.  That doesn’t sound all that bad, I thought when I picked up a massive brown paper bag from the pharmacy with my medication inside.  Then I opened it and let’s just say three times a day for eleven days — That’s a lot of powder.

I mixed it with water, as suggested, to turn drinks into a somewhat orange-flavored chalk.  It certainly is not the worst medical experience I’ve undertaken . . . but it was definitely unpleasant.  Cholestryramine is designed to not dissolve so you essentially have to drink a grainy, powdery formula.  Not only that but staggering the medication to be as close to eight hours doesn’t sound hard but can be problematic — I was taking at 2:00 a.m. some mornings then staying up until 12:00 a.m. other nights and the times kept seeming to bounce from not ideal to worse.  In the end though it did the job.  About a week ago, I had bloodwork done to determine if there were still traces of Aubagio in my blood, and two days later my doctor called reporting Aubagio was undetected.  Pretty incredible (and scary) that a medicine found to circulate in your body for up to two years can be gone in two weeks.  Modern medicine is magic.

Meanwhile, during this ‘wash-out’ phase, a company called Ocrevus Access Solutions contacted me.  This is when a woman over the phone introduced herself as “My patient navigator.”  Fancy.  She explained that she is my personal guide, someone to provide support through my process with Ocrevus.  This means she works with my healthcare team and insurance every step of the way to ensure my infusion is set up, to ensure I am prepared my infusion day, and to ensure I am included in financial programs. details.

“That’s a lot of information though.  Let’s start at the beginning — Do you have our Ocrevus Welcome Guide?” she asked and her voiced sounded like a smile — light and friendly.  “It has important safety information; safety ethicacy; what to aspect before, during, and after your infusion; preparation for your infusion; and question and answers.”

“No problem!  I’ll send one over to you right now.  It should arrive in two days.”

It was around this moment I knew my Patient Navigator would be equivalent to that sigh you take after a stressful day.  I already felt calm.

“Right so let’s talk about the Ocrevus Co-pay Program,” she said.

Because I have commercial insurance, I am apparently allowed entrance into this financial assistance program, which is run by Ocrevus’s manufacturing company named Genetech.  This program pays for the out-of-pocket costs associated with Ocrevus.  This means they pay for my medicine and administration fees.  Let me say it again: They pay for my medication and admin fees.  To say the word ‘amazing’ to sum this up doesn’t do it justice.  Let me make this clear by taking a moment to breakdown the cost for Ocrevus . . .

Without connection to this Ocrevus Access Solution and without access to insurance, the whole sale price for one dose of Ocrevus is an estimated — and staggering — $32,500.  And I’m not done: Ocrevus is taken every six months, which means the whole sale price for one year — only two doses — is $65,000.  That’s for one person.  Every single year.  Oh, and I should mention here that this amount rises even higher based on co-payments . . . and infusion site fees . . . and hospital fees.  It’s insane.  That’s putting it lightly.

Obviously our first step was to ensure my insurance would help with the Ocrevus cost and to determine that, I had to complete paperwork.  Then it was paperwork for approval to Ocrevus Access Solutions co-pay program. This process was supposed to take about two weeks but week after week rolled by and soon two months had passed without an infusion date in sight.  That’s when my Patient Navigator phoned me again — she was calling weekly by this time now.  Eventually and luckily — extremely luckily — we learned my insurance accepts Ocrevus and I was approved and enrolled in the co-pay program.  This means I only have to cover the small fees associated with administering the medicine.

“The only thing left to do now is to schedule your infusion.  I would schedule it for fifteen days after your wash-out medicine.  If that time has to change, it’s fine but it’s good to have it scheduled just in case.”  I know she does this for a living but she felt like my life planner in that moment and I was grateful to hand over the keys to my body.

So my infusion was scheduled for Tuesday — this Tuesday, this day in fact and I am writing you after returning about an hour ago.  I’ll have much more on that process in my next and coming (soon) blog post.

Meanwhile, I wanted to put this information out there so that I remember and to provide hope to those with MS or those who know of someone with MS and just let them know that things can work out.  Don’t give up and stay strong.

Thanks for reading and thanks, always, for your support.